Since today's guests where the first review I've published on the new blog. I thought I should interview as well. As these guys have delivered quite frankly a brilliant debut album with OLD WORLD RITUAL.

I've had this album for a couple of months now and I was supposed to review it for The Sludgelord. But the guys were kind enough for me to review it here which I'm very grateful for, as the album is a powerful slab of Sludge/Stoner Metal spliced with Doom and Gloom cosmic interludes. The vocals are killer and are pissed of as hell.

I'm talking about CONJURER – the Indianapolis based Sludge/Stoner Metal collective who are starting to turn some heads within the Sludge/Stoner Metal scene. Give it time as these guys have the potential to become one of your fave new bands. If you're into Mastodon/Baroness (before they went into radio rock friendly territory) then check these guys out now.

Before then you can read this interview.

1 – Hi guys. Thanks for doing this. And allowing me to publish the review for your new album on the new blog. How are things with you all today.

DM: We’re pretty good, thanks for having us.

2 – From a recent article I read about bands and the questions they hate being asked the most. I'm afraid I'm going to ask it for people who haven't heard of your band. How did the band come about.

JR: After our last bands had kind of run their course, Gabe and I decided to put something together that was a little slower and tuned down, even more than our previous projects. After we solidified the lineup, we started writing a hand full of songs that became the first EP.

3 – Your debut album – Old World Ritual. Wow, what a record that is. What is the album about and what can people expect from the album.

4 – I loved how you guys mix Sludge/Stoner Metal riffs with an almost Space Rock driven Doom/Gloom outlook. Do you agree with that statement or do you call your music good old fashioned Rock and Roll.

JR: We really tried to not tie ourselves to just one thing, even though we can definitely fit into the genres you listed. We love all of those, but it’s also hard to claim any one of them, since we try not to stay in just one.

5 – I read my good friend – Melissa from Doomed and Stoned's review of your new album. She nailed the feel and tone of the album. Did that review surprised you. As I think you will be receiving similar reviews over the next few months or so.

DM: Who wouldn’t be happy to be mentioned in the same breath as Crowbar? We are stoked she reviewed the album and are just happy that people who dig the same stuff we do seem to like it. 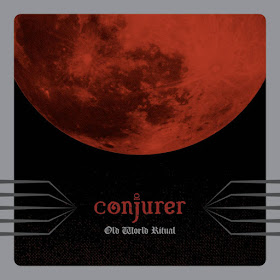 6 – I love the album cover for Old World Ritual. It doesn't give too much away on what's on the album. Was that intentional. To create/design a cover that leaves an element of surprise.

DM: When the band starting talking about album art, I had those 80’s Time Life paranormal books and old UFO books in mind. John and I sketched it out during practice and had the other dudes toss out ideas that got incorporated into the design.

7 – Who designed the cover. And what does the cover mean to you as a band and for the album in general.

JR: I designed it from the sketches that we worked on together. Overall we wanted it to be minimal but still linked to the lyrical ideas of the album.

8 – What's the song-writing dynamic within the band. Is it a group collective or down to one individual.

DE: Usually one of us comes to practice with a riff or a song idea, then we add to it and arrange it together over the course of a couple weeks. 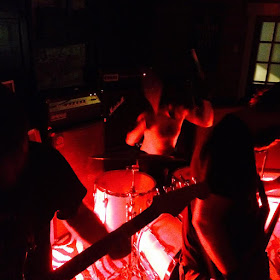 9 – What have been people's reaction to your music. Good or bad reactions.

DM: Really great for the most part. The only bad response, has been a dude that thought we played too slow…

10 – How do you deal with negative reactions to your music. Do you take suggestions or criticisms on board or do you focus on your own thing.

DE: We mainly focus on our own thing because we have our own internal editing process. Even after completing songs we sometimes scrap them if they’re not up to snuff.

DM: We play a little more than once month. We try to play outside of Indy as much as we can.

12 – Dustin, this is a question for you. One of my fave parts of the album is your vocals. They're very hardcore based though with a slight Doom Metal vibe. Was it hard recording vocals for you album as you're pissed off and loud as hell through out the album. And which Hard Rock/Heavy Metal vocalists influenced you as a musician.

DM: It actually went easier than I thought it would. I came into the band with kind of a Matt Pike style in mind. It quickly turned into to something else completely, mostly in order to be heard over the amount of amps we play through, haha.

13 – I suppose I could throw that part of the question to the rest of the band. Which bands and artists inspired you to become musicians. Any particular albums that stand out.

JR: There are a shit ton of bands I could list here. The band that really turned me on to darker metal at a young age was Alice in Chains (Dirt). But the band that later made it feel possible to play in a band was Burn It Down (Eat Sleep Mate Defend) from Indianapolis.

DM: White Zombie is definitely the biggest influence on me from my childhood. Also, I always go back to Black Sabbath (Masters of Reality) and Burning Witch (Riff, Canyon, Dreams)

DE: Mostly early 90’s grunge and I grew up listening to Led Zepplin.

14 – Well guys thanks for doing this interview. All the best with your new album as it's a killer record.

JR: Thanks a lot Steve. Best of luck with the new blog!

Words by Steve Howe and Conjurer

I want to thank Conjurer for doing this interview. Check out their debut album – Old World Ritual – as it's an absolute blast from start to finish.