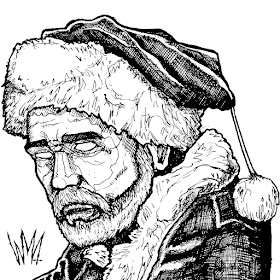 UK Scuzz/Grunge/Sludge/Stoner Rockers – WOMEN – return with a new EP – Feel Bad Hits Of The Winter. Yeah I wonder which band influenced them for that title. Don’t worry; this isn’t some second rate QOTSA clone. WOMEN are a finely tuned Sludge/Stoner Rock combo with a few tricks of their own in the riffs department. A couple of the tracks on the EP – Feel Bad (Hit Of The Winter) and Hive Minds – have been streaming already on BandCamp for a few weeks and I’ve promoted on the Facebook Page recently. Now it’s good to see that WOMEN have a proper EP with two extra songs but more about them later.

First track – Feel Bad (Hit Of The Winter) – a low-down, dirty Sludge/Stoner Metal song that packs quite a punch with melodic riffs and a fully confident groove. The vocals are what you expect from a band such as WOMEN. Grizzled, angry and one that has shades of Mastodon at times. The FUZZ is there for everyone to feel and listen as the mood can be very psychedelic with a ton of fast-paced riffs.

Second track – Hive Minds – opens with a grunge based riff before the band return to their heavier Sludge/Stoner Metal ways. The vocals drift from clean based chants to sludge based growls and it’s quite a contrast especially when they’re mixed with the grunge based doomy riffs. It shows you how inventive and demonic the band actually is. One of the standout songs on the EP.

Third track – Vampyres – sees WOMEN opt for a more Red-Fang approach to their music especially where the riffs are concerned. The vocals have a snarling Punk Rock vibe but it’s the heavy sludge/stoner riffs that holds your attention as the band play at such at a fast pace. It’s hard to keep up at times. It’s quite a bass heavy affair as WOMEN experiment with their sound yet again. I’m not complaining as its good to see WOMEN explore different sounds on the EP.

Finally, WOMEN offer one final epic almost 13 minute track – Jam Room (Full Version) – a song that takes a while to get going as the production is very lo-fi as the sound drifts from great to not so good. I feel this song is just here to make up the numbers but it is a great song to listen to. I hope the guys record a new version of this song and perhaps cut 5 mins from it as there is a fantastic song waiting to be discovered here. It’s purely an instrumental jam based song with epic guitar solos and impressive drumming through out.

Feel Bad Hits Of The Winter is an excellent EP and it shows that WOMEN are definitely a band to look out for. Hopefully the next full length record won’t be too far behind.

Thanks to WOMEN for the promo. Feel Bad Hits Of The Winter will be available to buy soon.