High Fighter are perhaps my fave band I've reviewed and interviewed over the last few years. They've released a stunning debut EP – The Goat Ritual back in 2014. Since then I've kept a close eye on the band to see what they're currently upto.

They've had a busy couple of years since their inception. Major tours with AHAB, Mammoth Storm have followed. Plus a well received appearance at Desertfest Berlin.

Though the next exciting chapter in High Fighter's action packed career could be their most daunting yet. Their debut album – Scars & Crosses – is about to be released on June 10th 2016 via Svart Records. It's a superb debut album packed with huge sounds with tons of heavy riffs and sinister vocals from lead singer – Mona. You can read my review here.

I wanted to catch up with the band before they release Scars & Crosses. Mona and Ingwer kindly agreed to do another interview. The first one you could read here. But that's not all....

NOPE. High Fighter have kindly allowed us here at Outlaws to stream the whole album in all it's vibrant Sludge/Stoner Metal technicolor glory. So enjoy the album and read this fantastic interview at the same time.


Hi, High Fighter. Great to have you back. How are things with you today? Thanks for doing this interview.

Cheers Steve, we're alright, thanks! It's cool being back on Outlaws of the Sun, thanks for having us!

So let’s get straight down to it. Your new album – Scars And Crosses – is about to be released. So how you feeling. Excited, Scared, Hyper, Frightened.

Mona: As you can imagine, we're pretty excited, of course!

Can you tell our readers what people can expect from the album?

Ingwer: People can expect the next step after 'The Goat Ritual'. I think the record is more varied than the EP. It’s a mix between various styles of heavy music, from blues to noise to metal and a lot of stuff in between.

Mona: I think especially playing live so much as we did after we released 'The Goat Ritual', also really got us together as a band in first place, and effected our entire songwriting for the album. We have found ourselves, and 'Scars & Crosses' feels way more homogenous to me then it did on 'The Goat Ritual'. When we recorded this first EP back in the end of 2014, you know we all just came out off different bands with different backgrounds, also to that date we have never stood on a stage together with High Fighter.

Nowadays we have more found our place, sound and a common direction after playing live a lot, but we also still try to always stay open minded when it comes to combining different music styles with each other. We're not a pure doom band, nor do we try to be a pure sludge or stoner band. You will find a lot more in High Fighter as well as on our upcoming album. 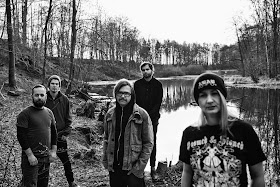 Mona: We hope so, haha! Well, at least I think we leave enough space and room in our music, so you do with this whatever you wanna do. If you're a pure metal head, you will find a bit of what you need. If you're a stoner, blues, sludge or doom enthusiast, like your tunes melodic but mean and heavy on the other hand, we've got something for you. I'm a fan of leaving enough space for your very own definition and vibes you get with our sound.

Was it an easy or hard album to write and record for?

Ingwer: Some songs were done pretty fast and some needed a few months to develop. The songwriting process started immediately after the recording session of 'The Goat Ritual', but in the end there wasn’t that much time, because of touring and other stuff.

Did you ever expect you would be at this point in your career with High Fighter releasing your debut album? As it didn’t seem so long ago you released your debut EP.

Mona: We're completely an underground band, we open at festivals, do all our band stuff except of the recent label deal the DIY-way, and what's probably the best part of it, we're a band having just a good time – inside our rehearsal room or on the road. We work pretty hard for what we do, try to get on many shows as we can, but it's still coming out natural and more the kind of chilled way, everyone gives his own input for High Fighter as he or she can. But yes, we're still stoked about the reaction we already got with The Goat Ritual, which used to be a rough demo only, as well as the first responses we currently receive for our debut album 'Scars & Crosses'. But the most exciting part of the High Fighter's journey to me, I feel lucky to be able touring with this band and my best mates so much. 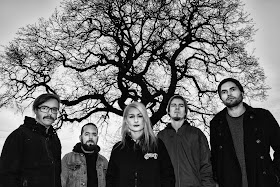 What was the full recording process like this album? As you recorded your debut EP over the course of a single weekend. Did you carry out the same guerrilla style of DIY recording you did for this album.

Ingwer: The recording process felt different than last time. We needed to leave Hamburg, because we didn’t want to have our natural environment around us. Our friends in AHAB told us about the Rama Studio in Mannheim, so we went there for 10 days and recorded the songs live, like the last time. On the one hand it was a lot of fun, because Jens Siefert, the owner and audio engineer of the studio is a nice guy and we did have the opportunity to use some very nice vintage amps, but on the other hand it was also pretty exhausting due to sickness.

Toshi Kasai has mixed and mastered the new album. How did you get a legend like Toshi involved?

Ingwer: A few years ago Toshi has already mixed and mastered a song by Constantins, Thomas’ and my old band Buffalo Hump. I just asked him back then and he was interested in doing this. When we were talking about recording the first High Fighter long-player, we showed that song to Mona and Shi and they were impressed by the good sound. So we decided to ask him to do the job and luckily he was interested again.

Mona: Yea, having Toshi being a part of our first album, really means a lot to us. We're still stoked he was up for it, and how it turned out on the record. Toshi is amazing!

Were you apprehensive sending your music to someone as highly influential such as Toshi, to mix and master your album?

Ingwer: Well, maybe a little bit, but actually we didn’t think too much about it.

Obviously you’re happy with the final results. What does Toshi bring to the High Fighter sound?

Ingwer: He brings warm and natural vibes to the sound and he also keeps it rough, which I do like a lot. The record is not overproduced at all, but we have to give credits for that to Jens Siefert of Rama Studio as well. Both of them did good jobs.

The album is being released on ace cult record label – Svart Records. How did you get involved with them?

Mona: In early 2016, we sent out some super rough demos to several labels. Svart Records were one of the first, who immediately showed up their interest. To be honest with you Steve, it's been even my personal dream-choice and I was hoping to hear back from Svart. Am a big fan of their roster and work, and we're stoked to have found a home on such cool label for our first album!

Did you have any other offers from labels to release your album?

Mona: Yea, there were a few more labels interested in working with us, but at this point we had to go with Svart. It felt this would be a perfect match and they totally understand and dig our sound. And so far, we're more than happy with them, feel home and very welcome in such great company.

Congrats on getting the album released on vinyl. Did you have any input into the design of the vinyl or did you leave that upto the label.

Mona: Thanks! And we cannot wait to hold these Vinyls in our hands. Unfortunately the release of our LPs will be a bit delayed, since pressing machines are usually blocked by major labels, so smaller record companies have to wait until it's “their turn”, which kinda sucks, but the wait until latest early July will be worth it. As we do 3 different Vinyl editions, and all of them look amazing! Svart let us chose, and the designs as well as choice of editions were totally up to us. 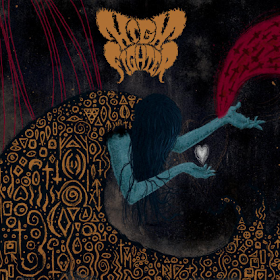 The album cover is stunning. Can you tell us more about it, who designed it, what it means to you as a band?

Mona: Thanks mate, again we have worked with Dominic Sohor, he's such a rad and talented artwork artist and from the UK. Dominic has been already responsible for the stunning album cover of 'The Goat Ritual' back in 2014, but again we just shared our music, a rough vision and the album lyrics with him. None of his drafts or the final result for the upcoming album were changed from our end, he just totally gets our sound and vibe with his very special art. I love it. One day I will even ink some of his magic he is going to draw for me personally under my skin! But what's impressing me most, Dominic is deeply reading between the lines of my lyrics, so this is very personal and special to me. His artwork perfectly fits to our sound, and represents the pain & beauty in one picture.

'Scars & Crosses' deals about a dark past, about the wounds and scars of your soul that life may have given you. It's about your inner demons, a life between heaven and hell, this is why I also chose the cross as a symbol or metaphor as the roots of all evil. But it's also about to learn to live with those scars, even people in society or in any relationships will find your scars as a bad attitude, a bad character. On this album we say no, it's not. Learn to also love those who have their scars, we all have them...these darkest days, moments and demons in life. Your entire history, our scars engrave us, they belong to you as much as the good sides.

Will you be touring this record heavily? As you’ve done a lot of gigs/tours recently.

Ingwer: We will tour parts of Europe this July with EARTH SHIP and MAMMOTH STORM, and there will be some festival gigs and single shows around the summer. Maybe there will be another tour by the end of the year. We will keep you up to date, but do hope to play live this year again as much as we can!

Thanks for doing this interview. Best of luck with the record.

Mona: Steve, thank you. For your massive and continued support since day 1 of High Fighter. You rule, and so does Outlaws of the Sun. Keep up the great work & amazing support for this scene. Cheers for the chat, stay high & hopefully see you soon on the road!

Thanks to High Fighter for doing this interview. Special thanks to Mona and Svart Records for letting us stream the brilliant new album. Scars & Crosses is a must have album. Buy your copies here from June 10th 2016 via Svart Records.