An Interview with DANA ORTT from BEELZEFUZZ

Beelzefuzz have had a turbulent couple of years. Name changes and line-up changes may have taken their toll on other bands. Though not Beelzefuzz. The band regrouped and have released a superb new album – The Righteous Bloom.

I recently caught up with Dana Ortt (Lead Vocals/Guitars) from the band to discuss how the last couple of years have been for the band and how they came through the other side.

Hi Dana. Thanks for doing this interview. How are things with you today. I must say, it's good to have Beelzefuzz back in business.

Hey, man! It's good to be doing interviews for the new album. It took maybe a little bit longer than expected for us to finish the album, but we are feeling good that it's finally released.

Before we start discussing your new album, you've had quite a tough time with Beelzefuzz over the last couple of years. Splitting up in 2014. Starting a new band with The Righteous Bloom and then changing your name back to Beelzefuzz. Plus you had a legal battle over the name. Did you ever think – Fuck this. Too much hassle over a name. Or was that pulled you through.

In 2014 there was a disagreement in the direction of the band, this lead to one band member posting a "RIP Beelzefuzz" post from the band's Facebook page followed by me being removed as an administrator of the band page by that member. Darin, Greg and I proceeded to continue tracking songs for what we originally intended on being the 2nd Beelzefuzz album.

I'm the primary songwriter and I'm going to play the guitar and sing in a style that was first known to be coupled with the band name Beelzefuzz. With the record label's approval we changed the name back to Beelzefuzz. There was no legal battle, however I did have to file and pay for trademarks on the name for tax purposes and to ensure our ability to legally use it.

Looking back over the last couple of years would you have done things differently.

I'm just trying to move myself and the music we play forward in a positive direction. I've learned a lot in the last 2 years. I do look back on some things in regret but I can only take that experience and try to learn from it and not repeat it. To get to a positive place requires taking action and sometimes those actions are limited to the experience you have until that point in time.

My intentions have always been to write the best songs I can and sing and play them to the best of my abilities. The band does not offer any financial profit . We try to break even in our ventures but that is never a guarantee. Darin and I have spent a couple thousand dollars each time with these 2 Beelzefuzz albums. We want make the best album we can make and it's a challenge to put these albums together, we do it for the challenge and the love of the music. 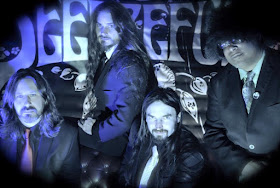 When did you decide to change The Righteous Bloom back to Beelzefuzz. Was that a natural decision once you got this line-up of the band in place.

As we proceeded with the Righteous Bloom name we discovered that we would have to pay for expenses that we initially paid for with the Beelzefuzz name. We were still being referred to by many as Beelzefuzz and in general it was confusing for everyone. Oli from Church Within recommended from the start that we keep the Beelzefuzz name and I should have followed his recommendation. We changed the name back after we had finished the tracking for the album.

You have a new album out now. The Righteous Bloom. It has a different sound to your debut album. Just like the classic Doom sounds of the 70s. Though I do hear shades of other genres within the album. Was that your intention to release something different.

I think we show our musically influences liberally on the 2 albums we have. I'm influenced by Sabbath, Purple, Heep, Grand Funk, early Genesis, Pentagram , Trouble, Fates Warning also Maryland bands like Earthride, Internal Void, Revelation have had an equal impact on the way I approach writing songs.

We didn't intentionally try to recreate any approach from the first album. We wanted to expand upon the range of sounds and emotion the band puts out. The song structures and format became a bit more adventurous on this album. We tracked the songs at Greg's studio at his house this time around. Richard Whittaker mixed and mastered the new album and also mixed and mastered the first album. Richard's production techniques have a lot to do with the sound of the band as he mixed both albums. We are very fortunate to have Richard as essentially our producer.

Was it an easy album to write and record for. Did you do anything differently compared to your last album.

How hard was it getting this line-up together. Kudos on getting Bert Hall into the line-up. He's an awesome musician. What do the new band members bring to this line-up of Beelzefuzz.

Darin and I played on the first Beelzefuzz album. Greg joined us shortly after the first album was released. We invited Bert to play on the demos of the 2nd album which became the tracking for the 2nd album. Greg brings cool harmony and solo ideas to the songs as well as adding a bigger guitar sound for the live shows. Greg also recorded the album at his studio in his house. Bert has a lot of experience with the Doom genre and lends a distinct dynamic to the album with his tone and timing.

Did all the band members contribute to the song-writing process. Or was this primarily yourself.

For all the songs I'll come up with a chord progression with a basic vocal melody beforehand and present it to Darin at practice, we'll jam it out and make changes to the arrangement as we go along. Greg will add some colorful guitar lines over top. Greg has presented some song ideas that will be used for the 3rd album. We'll get together with Bert and run through the song and finialize any adjustments.

You've recently played at Psycho Las Vegas. How was that experience. How did the crowd treat the new material and the old material. If you played any.

Psycho Las Vegas was awesome! So many great bands, very cool that we got the opportunity to see the bands as well as play our own set. It's great that a fest like Psycho Las Vegas happened in the US, usually only see cool fests like that happening in Europe. We played songs off both albums, everyone was very receptive it seemed.

Are you more comfortable playing the small scale gigs or the bigger gigs such as Psycho Las Vegas.

I'm happy with any gig that has open minded people who will give our music a chance. I don't expect our musical approach to go over with grand acceptance when we play and I try to put out the best performance of the songs I can every time we play no matter the size of the gig. 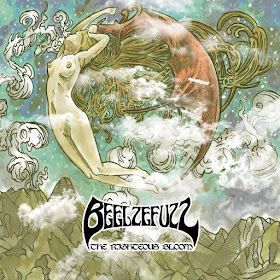 The album cover is superb. You got David Paul Seymour to design that cover. How much input did you have into the overall design of the cover.

I think it turned out cool. Darin contacted David Paul Seymour with the idea of re imagining art from a painting he found. We feel the art on the cover should visually realize the vibe of the music within. The art on the first album was done by Brian Tutlo. Brian also designed the original black and white logo for the band and initiated the visual aspect for the band.

I think the artwork on the first album is amazing in that it conveys effectively the emotion of the music, for me anyway. The detail Brian went into was unique and captured the vibe of the music I felt. I'd really like to have Brian do another cover for us.

What does the album cover mean to you as a band and for the album in general.

We wanted the art to have a theme of redemption and awakening. We wanted to expand upon the theme that Brian Tutlo established on the first album cover. We've been discussing art and a theme for the 3rd album and we have begun tracking with the goal of a summer 2017 release.

We would love to be able to play some dates in Europe. Upon our last release, Oli from Church Within arranged for us to play the awesome Hammer Of Doom fest in Germany. It would be fantastic to have an opportunity like that again. We'd love to do a few weeks of touring with a band here in the US.

Well Dana, thanks for doing this interview. Much appreciated. Best of luck with the album. It's a stunning album.

Thanks for the interview and the interest in the music we are doing! Peace!

Thanks to Jan at Sure Shot Worx for arranging this interview. Thanks to Dana for taking the time out to talking to me. The Righteous Bloom is available to buy from Restricted Release and The Church Within on CD/DD now.