Interview with Aymeric from STONEWITCH

French band Stonewitch performs crude and heavy traditional doom metal with slightly stoner components. It was founded in Angoulême in January 2014 by Aymeric (guitars) and Romain (guitars, bass). Together with Serge (vocals) and Fog (drums) they composed “The Godless” demo, it took about 8 months to write these five brief songs which attracted the attention of Terror From Hell Records who releases it on cassette in July 2015.

With new drummer Cedric and bass-guitarist Joss they started to write Stonewitch's debut album, and it seen the light of day in summer 2016. We discussed the art of composing and performing doom dirges with Aymeric himself.

Salut Aymeric! How do you live now with the fact that Stonewitch debut record is released in physical format?

Hail Aleks! We are very glad that the album is finally out ! You know it's always a very long process between the moment where the songs are written and the release of the record, so yeah very happy ! Moreover, Stephano from Terror from Hell did a great job, so a big cheer to you brother!!

Yeah, how did you get on Terror from Hell train? Do you feel safe under their wing?

We asked a friend of our, the mighty Shaxul, from Manzer and owner of Legion of Death Records, if he knew some labels which can be interested in our demo. He gave us a list of contacts and we sent a few demo. Stefano was in the first to respond, he was pretty excited about the tunes and that's it, the deal was done. Yeah, Stefano is the right man for us, he is pretty comprehensive and we have the same idea on how metal should be. Terror from Hell is a great label, so yeah we feel pretty safe!

As the band was formed just two years ago, can you tell main facts about Stonewitch?

No problem. Stonewitch was created by Romain (ex-Manzer) and myself in 2014. Just a few weeks later, we asked a friends of our (Serge , vocals) , who was also the singer of our previous death metal band, to know if he would be interested in joining the band and he immediately accepted. So we began writing few songs and in august 2014, we recorded our demo The Godless, at the Caveau Studio, with the help of Fog, as a session drummer.

And then, we had some line up problem, but we finally meet Cédric (drums) and Joss (bass guitar) , in a hard drunken night, and we began rehearsing in June 2015, and we started playing live in September. So, we recorded a 6 piece (5 news songs + a cover), which became our first album, which was released in June this year through Terror From Hell Records. 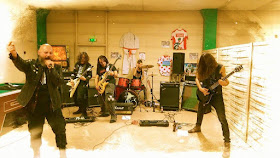 Pentagram’s “Sign of the Wolf” sounds very natural amidst Stonewitch’s own songs. How did you get into the Doom Cult? How long ago did you enter this realm?

First, thanks for the compliment! I don't remember exactly when but I was really young maybe 8 or 9, when my father made me listen to the LP Master of Reality from Black Sabbath, and instantly I had chills! It was so powerful and darker than the stuff I was into (Deep Purple Led Zep, Jimi Hendrix), Black Sabbath was the thing and had this misanthropic touch which was the perfect thing for the weirdo I was/am. Then, I discover Pentagram, Saint Vitus, The Obsessed, Trouble, Candlemass, Witchfinder General, and I found a whole world where I belong.

By the way, why did you choose that name for the band? Sounds trendy…

Ahah here is the tricky question ! We wanted a name which represent the most how we sound, a name that evoked instantly heavy metal and doom. You can see it as “ Stoned Witch”, but it doesn't seems nice so we turned it into Stonewitch. I know why you say it's trendy, because of all the shitty stoner bands with “witch” in their name, but for us it was like a reference, homage to some bands like Angel Witch or Witchfinder General, bands whose influenced us a lot, bands not so trendy after all..

So nearly a month ago Terror from Hell Records released Stonewitch full-length "The Cross of Doom". The album is heavy, dark and I would say that you tend to crude sound both in instruments and vocals. How did you see the band when you started it?

I think we are getting a bit better, we never play heavy metal before, only extreme stuffs, so it was a bit challenging for us at first. On the demo, we wrote the songs with the idea of sounding the more heavy/doom as possible, so we were like doing all the clichés, and in a sense, we were a bit limited. On the album, I think we are more experienced so we let talk all of our influences with no restriction, including extreme metal, but still in an heavy/doom package.

The band also has demo record "Godless", do you feel this material sounds actual today?

Oh yeah ! We are still proud of this record ! I think there are pretty good songs on it, and it was our first try, so yes there are imperfection, things that we could had done better, but I still love it !

What was your primal inspiration when you worked over "The Cross of Doom"?

It might sounds a bit senseless, but the primal word which came to my mind is sincerity and authenticity. I really enjoy the power that lives on records like Doomicus Epicus Metallicus by Candlemass, or on the two first albums of Rainbow, the music sounds so real and so powerful and we wanted to recreate this feeling through our own style and our own abilities. When I listen to our record, I have this impression that this could be an album which came out in 80's, and that's exactly what we wanted to do. Not that we wanted to be absolutely “revival” or surfing on the nowadays hipster mode, but in the sense at this golden ages, the music had a lot more feelings that nowadays bands.

Is the artwork somehow connected with the songs or is it just some abstract image?

Not really, every songs are short stories, with different characters and settings, like stuffs in Weird tales, and they all end in tragic endings, so in a sense the character is carrying the cross of doom.

It's Romain who had the idea behind the Artwork. The ghost who appeared from the instrument of the violin player is the personification of the feeling of our music, a dark torment that will obsessed everyone who dares listen to The Cross Of Doom... ha ha

How long did you compose and then polished these songs? Was this process smooth or did you meet any obstacles on your way?

Hum.. I don't remember exactly but I think I wrote the songs in like 4 months. After that, we rehearsed them a lot every week, played them live few times I think and we recorded it. Yeah it was pretty smooth, the only obstacle that we met, was when I came up with the song Cross of Doom 3 weeks before our recording studio session. I really like this song, and I had to convince hard the others members of Stonewitch to record it and include the song on the release ha ha At the beginning, we had in mind to make an EP, but when all was recorded, we were so much satisfied with the result so we began to think it could became our first album, and that was it !

Can you pick up the song that represents the best of Stonewitch on "The Cross of Doom"?

To me, I don't know if my partners will be agree, it might be Holy Smoke. It's cover all the elements of metal that we include in our sound, there are off course very heavy doom parts, mixed with twin guitars NWOBHM inspired parts. This song concludes with an epic acceleration, that I’m particularly proud of. So yeah, I think this is the best song to describe how Stonewitch sounds: heavy, varied and intense.

What did “The Cross of Doom” release change in your life? Is it somehow different now?

Hum, nothing! We play metal inspired by old doom metal and bands from the NWOBHM, genres which are not at all mainstream, so the release didn't change our lives, you know what I mean? We are very satisfied with this album, but we don't do music for fame or anything else, we just do what we would want to hear, that's it.

What’s about your addiction to doom metal? Do you collect vinyl?

Oh, I’m a freaking music junkie, not just about doom. I listen to so many things, from Jazz/prog, to black metal, including doom of course. So, I do collect but not as much as I wanted! If I'd buy everything I listen to, I would probably be homeless! The two last vinyls I bought are Lost Breed – Wino Daze and the Blue Oyster Cult album The Revolution By Night.

Do you visit gigs of the bands that play in your region?

Yeah, as much as possible! In our region, there are people who propose very interesting gigs, I can mentioned the association Anthems Of Steels, a group of die hards, who brought Vulcano in Pictavia for example, and make some great gigs!

With Cédric ( Drums), we are also in an association, called Raise The Dead in our home town Angoulême, to organize underground metal concerts, in October we will make Black Oath and Riti Occulti play !

How often do you play gigs in your region? Can you say that doom scene in France is already formed and has its leaders?

We play like a gig a month. We would like to play more, but for a first year of making live, it's not that bad, and we met a lot of great guys on the road.

Yeah we can say that, there are a lot more doom metal bands than a few years ago, I can mention our friends from The Bottle Doom Lazy Band, Presumption, Barabbas, Clouds Of Dementia. 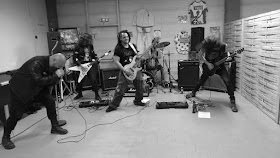 Aymeric, thank you for your time and answers, let’s resume – what are your plans for Stonewitch future? Do you plan to go on further with it?

More gigs!! Ha-ha We hope that we'll be playing more and more this year, and we have a couple of new songs, maybe returning back to studio again.

Thanks Aleks, for your support, and see you all maniacs!

Words by Aleks Evdokimov and Aymeric