MAGICKAL TIMES: An Interview with Jake Wallace from ELDER DRUID

Elder Druid are a Doom/Sludge/Stoner Rock band from Ballymena, Northern Ireland. I've been keeping a close eye on this band as some the songs they've been posting on their BandCamp Page have been first rate.

Elder Druid are about to release their debut EP – Magicka on Sept 23rd 2016. I wanted to catch up with the band before they release Magicka, to see what they have in store for us with their debut EP.

From the sounds of it, the EP is going to be HEAVY AS HELL. I recently caught up with Jake Wallace (Lead Guitars) from Elder Druid to see how things are going with the band and what the future holds for the band. Read on for more info......

Hi Jake, Thanks for doing this interview. How are things with you today?

Things are good man, the elusive sun has made an appearance and the weekend is beginning.

Can you give people a brief overview of how the band came together and where it is today?

A few years back we were compiling a list of words that we liked and it just so happened that the words ‘Elder’ and ‘Druid’ came up and we thought it sounded like a good band name. The band hadn’t actually even been thought about before this so I guess this was the conception. Today, we’re about to release our first studio EP, ‘Magicka’, and doing a few shows in the North and South of Ireland.

How would you describe your music in your own words?

I’d say it’s a fairly even mix of stoner rock and sludge/doom, we’ve tried to fuse both genres so that it doesn’t lean too heavily to one side. 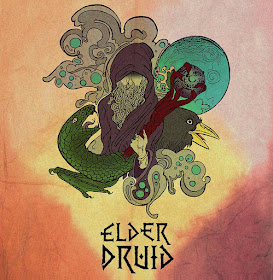 Why did you choose the name Elder Druid for your band. Any specific meaning?

As I mentioned, it was a pretty basic story! We just decided to make a list of unusual words or words that we thought were interesting for whatever reason. ‘Elder’ probably had something to do with The Elder Scrolls game series and I have no idea where ‘Druid’ came from. We imagined what an Elder Druid would look like and it set the visual imagery which laid the foundations of what we wanted to sound like.

You’re about to release your new EP in September. Can you give more details on what the EP is about and what people can expect from this?

The EP is entitled ‘Magicka’. The 5 tracks we recorded all incorporate the themes of fantasy, magic, the occult and big fucking wizards! The visual imagery has always been pretty clear because of the lyrical themes and the riffs go hand-in-hand. People can expect some big doom riffs and a lyrical adventure through our minds.

Was it an easy or hard EP to record for? Are you apprehensive with this being your proper debut release?

It wasn’t as difficult as we first expected as we’ve been playing 3 of the tracks over the past year or so. The main challenge was getting the last two songs as tight as possible before we went into the studio. The whole process was made a hell of a lot easier as Andy Shields (Hornets) was the man in charge of the studio time. His patience and attitude was instrumental in allowing us to create exactly what we envisioned. We’re probably more excited than apprehensive about the release because as of yet, we haven’t heard the final product so it’s good to finally get something worthwhile recorded and released.

What inspires you all when writing and recording music?

We’re obviously inspired by all the greats of the stoner rock/doom metal world, bands like Kyuss, Sleep, Black Sabbath, Electric Wizard, Down & High on Fire. It is quite hard to pinpoint exactly where our influences stem from, it is more a collective thing that has been built up over time. Another huge inspiration for us is other bands from Northern Ireland playing the same kind of music as us. I don’t think any of us had any idea that there were so many bands contributing to this scene and it’s great to share a collective appreciate and respect for stoner rock/doom metal. 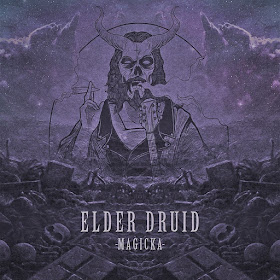 The artwork is very cool indeed. Who designed the artwork and how much involvement did you have with the final design?

Cheers Steve, the original illustrator of the ‘Smoke Demon’ was Alfi Andy, a guy from Indonesia who got in touch with the band a number of months ago. We printed the design on t-shirts not long after we bought it from him and then decided to base our EP artwork on it. We wanted something that would accurately convey what we were going for so I did some Photoshop work with the ‘Smoke Demon’ and came up with the final design.

Will you be releasing this EP yourself or via an Independent Label?

We’ll be releasing the EP ourselves. Our official launch is on Friday 23rd September where we play a show in our hometown. We’ll have physical copies for sale on CD, as well as digitally via Bandcamp, iTunes, Amazon, Spotify etc.

The Doom/Sludge/Stoner Metal community has given you a warm reception over the last twelve months or so. Has that surprised you the way people have taken to your band?

Yeah it’s always a surprise to know that there are people from all corners of the world listening to and digging our music. The whole community is very different from other genres, there is a huge degree of mutual respect and bands really help each other out when they can. There have been a number of people that have done write-ups or reviews on our music and they’ve been a huge help in getting our name out and about.

You’re from Northern Ireland and it seems Northern Ireland has a superb upcoming Doom/Stoner Metal scene with great bands such as Slomatics and yourselves. What is the scene actually like over there. Do you get to a chance to perform regular gigs?

The scene is actually great, I don’t think any of us really knew the extent of it until we started playing as Elder Druid. Obviously Slomatics are the godfathers of doom in Northern Ireland and everyone in the scene looks up to them. There are a huge number of bands we’ve played with that deserve recognition so we’ll name-drop a few here: Molarbear, Goatschlager, Korvid, Maw, Nomadic Rituals and Hornets (the band Andy who recorded our EP is from). We perform regular gigs in our hometown of Ballymena and we’ve played across the country in Belfast, Portrush and Draperstown. We’re heading down to Dublin at the end of this month to play along with some of big bands from Southern Ireland including Two Tales of Woe, Ten Ton Slug & Mother Mooch. 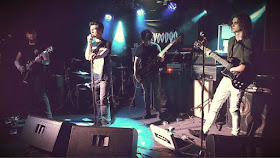 What’s the song-writing dynamic in the band. Is it a group collective or down to one individual?

It usually always begins with a riff. Either myself or Mikey will bring a riff to the guys and we’ll work from there. We usually figure out a general structure and get the guitar parts down. Then Dale lays down some bass, Brien lays down some drums and once the music is down, Gregg goes off and works on one of his psychedelic tales through the occult.

What are the long term plans for the band. Do you plan to play more gigs in support of your new EP. Or even play a few dates in the UK. Or release a full length album.

We intend to play a few more gigs around Northern Ireland after we release the EP and then hopefully get over to England for our first time. We’ve some friends based in London, Brighton, Liverpool and Gregg is based in Leeds for part of the year so a UK tour is definitely on the cards eventually. I’d say a full length album would be our objective for this time next year.

Thanks for doing this interview. Best of luck with your EP. Can’t wait to hear it. Do you have anything to say to your fans before you go?

Just want to say cheers to you Steve and Outlaws of the Sun for taking the time to have a chat with us. Cheers to Andy Shields for being a true wizard in the studio and cheers to everyone who has got behind us so far, hopefully the EP will go down as well as we imagine.