An Interview with Sean Sullivan from TEN TON SLUG

Ten Ton Slug are a fairly new name to the scene. They've just released their excellent debut EP – Brutal Gluttonous Beast. An uncompromising mix of Sludge, Groove and Doom Metal. Their sound is huge as their name suggests.

If you're a fan of Pantera, Down, Crowbar and the other legendary NOLA bands then Ten Ton Slug should be right up your street. I wanted to find out more about the band as I feel these guys have a bright future. They're already starting to make a name for themselves and it's not hard to see why.

I recently caught up with Sean Sullivan (Guitars) from Ten Ton Slug and he kindly agreed to do this interview.

OOTS – You're new EP is being released. Are you excited, nervous or both of those things.

Sean – We are very excited. We recorded in 8 or 9 months ago back in 2015. Since then we've been dying to get this released. We've been gigging and kept on going since then.

OOTS – It seems it's taken a long time for the EP to come out.

Sean – There was a bit of fine tuning involved but we then entered Metal To The Masses in Ireland. It was run by Overdrive in Dublin and we started progressing through that and things got busier. We were working on the EP as we went. We said we had to get it out and just release it.

I suppose you can keep going and fine tune things forever but it's done and it's time for it to come out. 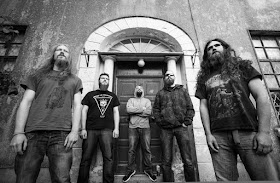 OOTS – How did the band get together.

Sean – It was originally myself and my brother Michael is the drummer. We started playing music together years ago in Connemara. We formed the basis in what would become Ten Ton Slug. We started doing this from about 10 years ago. It started getting momentum in 2014 when we got two members and filled up the lineup. Started gigging. Since then it's been gaining momentum. It's been brilliant

OOTS – Was the writing of the EP a hard or easy process.

Sean – We took our time with the writing of our EP. It came together naturally. The lyrics were inspired by a lot of different things. The harsh landscape of Connemara and the old folk tales and mythology.

The riffs came together when we imagined what would be going on when the music would be playing. The writing of the lyrics came together naturally. The recording of the EP we had a lot to learn. We are still learning and always learning as it's our first EP. We did our first session recording after a gig on Friday night. We went into the studio on Saturday and Sunday which we then tracked. The following weekend we tracked again in Northern Ireland. We are in Galway located in the West Of Ireland.

It's a 3 or 4 hour drive to get there. We go up on a Friday after work or whatever. Stay the Friday and Saturday, then we would go back on Sunday. Things are always take longer than you expected. We learnt that straight away. One of the reasons it took so long was the logistics of it all.

Recording was definitely a learning process but we know what to do when we start recording the full length album. Which we are working on already.

OOTS – Do you have an expected release date for the album.

Sean – It's too early to tell. We have 3 tunes almost finished for it. We have 6 or 7 tracks on the go in various stages of completion. We are just going to use the momentum we have to gig and keep writing new tracks for the last couple of weeks.

We are not going to force it. We are going to play them live, tweak them and pre-production next year.

OOTS – That was my next question. Are you playing these tracks on a live audience.

Sean – We will be playing some of the new tracks live as we are gigging soon. We are playing in the UK in Coventry on November 12th with a fellow Irish band called Two Tales Of Woe. Slabdragger are playing with a load of other excellent bands.

We may try a few songs there but we have a number of gigs around Ireland as well. So we will definitely be trying some of the new songs out. We are then in Germany in Christmas.

OOTS – Damn. That's impressive. For a newly formed band you're getting about.

Sean – Yeah. It's going well. We love playing live. We love writing. We want to play as much as we can. It makes sense to keep on doing this.

OOTS – You have work and families to consider. How hard is that when playing with the band.

Sean – It gets tricky. Definitely. We said at the start of this year, we would put our full effort into this and see where it takes us. When we entered Metal To The Masses Competition that's when we decided we should focus on this and see what happens. We are all had that in mind from February 2016. Sometimes there are things that need to be done and THIS IS ONE OF THOSE THINGS!!!

The time was right and we rolled with it.

OOTS – What influenced you all as a band.

Sean – We are huge fans of Crowbar and all the NOLA bands. Down and Pantera goes without saying obviously. The usual ones – Black Sabbath. You can't say you're not into Black Sabbath. 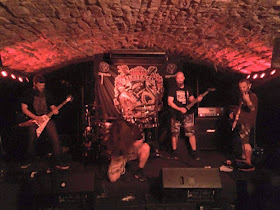 OOTS – The Irish Rock/Metal is getting quite a momentum and well deserved reputation at the moment. A lot of great bands coming from Northern Ireland and Republic of Ireland. Do you tour on both sides of Ireland or do you focus locally.

Sean – We will play gigs anywhere and if they are with bands that we like then we will make the gig happen. We wouldn't specifically focus on the South. In the North there is a great scene out there with some excellent bands. Two Tales Of Woe and ourselves recently played with Elder Druid. They are really a great band to check out.

For Irish Metal it's a good place to be. Even at Bloodstock there were 6 Irish bands that played there. I could sit here all day and discuss many more excellent bands from the Irish scene.

OOTS – We have to talk about the killer artwork for the EP. Who designed that.

Sean – Our bassist – Eoghain. He's a great artwork and he does all of our artwork. He does some gig posters. We have some stuff coming out in a while which he designed as well. 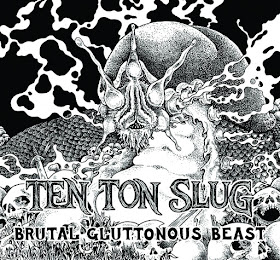 OOTS – Did you have any discussions with Eoghain when he was designing the artwork or do you let him do his own thing.

Sean – We let him do his own thing. We all put our two cents in and see what works best. He's really good at what he does. We wanted something big and slug-like. He did that alright.

OOTS – I love the title of the EP – Brutal Gluttonous Beast. Where did that come from.

Sean – We have a new track called Slug Grinder which isn't on the EP and that will be out on the new album. It's one of the lyrics on that song. It's influenced by mystical beasts and stuff like that.

OOTS – Have you got a label lined-up to release this or are you doing this yourselves.

Sean – We are doing this ourselves. We said if you want stuff to happen. You've got to make it happen yourselves. Hopefully if a lot of people here the new EP and down the line we may things differently with the album.

OOTS – How has the response to the EP been like so far.

Sean – It's been really positive. We've started receiving a few reviews, which is great. As you're a bit nervous to see what other people think. Though we are really happy with the songs ourselves. It's very hard to translate what we sound like live on stage on CD. We are never going be absolutely delighted on how we sound like on CD. In general we are happy with the music and that's the main thing.

OOTS – Sean, thanks for doing this interview. Much appreciated. All the best with your new EP.