Outlaws Nation Joint Interview: An Interview with YEAR OF THE COBRA

Year Of The Cobra are about to release their colossal debut album ...In The Shadows Below. The band which is comprised of married Drum and Bass riffsters – Amy Tung-Barrysmith (Bassist/Vox) and Jon Barrysmith (Drums) have created a delicately played and loud as hell debut album. It's an album that strikes the perfect balance between heavy Doom sounds with a pounding Sludgy/Stoner based groove.

Year Of The Cobra have been making a name for themselves over the last 18 months or so. They already have a fearsome live reputation and have already released a split single with Mos Generator. Signed to ace record label STB Records who will be releasing their debut album on October 29th 2016, Year Of The Cobra are going to become one of your favourite bands.

I asked my good pal Matthew Thomas over at Taste Nation LLC if he wanted to do one of our joint interviews that we've been doing recently. He agreed and this is the result as Year Of The Cobra have agreed to do another Outlaws Nation Joint Interview.....

OOTS/TN – Hi Amy, Jon. Thanks for doing this joint interview. Congrats on the new album. How are things with you both today.

YOTC - We’re doing great! Thank you. Excited about the album release. It’s been a busy week for sure! 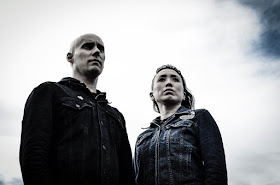 OOTS - Can you tell our readers how the band came together. Or why you decided to form the band.

YOTC - We met on Halloween 2007 at a club called the King King in LA. We were playing in separate bands at the time and didn’t really talk much at that show. It wasn’t until the second or third show we played together before we became friends. We actually didn’t start writing music together until 2014, after moving to Seattle. We didn’t really know anyone in the music scene at the time, so we just started writing songs. Luckily, we both wanted to write the same style of music. For the most part, it was easy.

OOTS – Why did you choose the name Year Of The Cobra for your band. Any specific meaning.

YOTC - It took quite a while to find the right name. We had long lists that covered many pieces of paper before we decided on Year of the Cobra. It was actually supposed to be a temporary name, but it stuck and we’re glad it did. 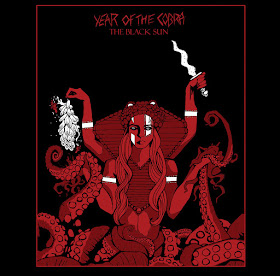 TN – We are here to talk about your new album. What was your recording process like? Was it spread out over days, weeks, months…….?

YOTC - We booked 10 days with Billy Anderson to track everything. Billy did a few mixes for us remotely after tracking, but we went back for the final mixes to make sure it was exactly what we wanted. All in all, it took about 3 months from the initial tracking to the final masters. The recording process itself was amazing. The studio, Hallowed Halls, was magnificent and working with Billy was life altering. He’s a genius. We consider him a third member of our band now.

OOTS – How did you manage to hook-up with the legend that is Billy Anderson to Produce the album. Especially for your debut album. What was it like working with Billy. Did he provide any helpful advice when you were recording the new album.

YOTC - Billy was at the top of our list for many reasons. He was the first and only one we reach out to and he really liked the EP. The first time he came to watch us play, we were scared shitless, to say the least. After working with him, we’re still scared shitless, haha, but we’re all good friends now and we have the utmost respect for him. His ear, his ideas, his knowledge, is beyond anything we’ve seen or experienced before. He just knew exactly what we were going for, without ever having to tell him. It was amazing.

TN – What does Billy bring to the Year Of The Cobra sound.

YOTC - One of the first things Billy said to us when we first met him was that he knew how to make it sound big, without making it sound like we added a ton of tracks, and that’s exactly what he did. Billy brought a bin full of pedals that we tried in every configuration until we found the exact tone. We’re sure no one noticed, but right after the recording, Amy’s pedal board got much larger.

TN - Did you "test" the new tracks at live shows to see what people's response to the new material.

YOTC - Absolutely. We always test out songs live first. It’s one thing to play it in the studio, but you won’t know how it works until you see how a crowd reacts.

OOTS – The album is being released on STB Records. Perhaps one of the best independent record labels currently out there. Did you guys have offers from other labels. Or was their no hesitation in signing for anybody else.

YOTC - STB was actually the only label we contacted directly. Jon sent an email when we released the EP to say that we were a brand new band and that we wanted to be on Steve’s (STB) radar. Steve wrote back the next day and said that he liked our debut EP, and in his own words said, “you are definitely on my radar”. From there, we started some cool and casual conversations via email and bonded over our punk and hardcore roots and our DIY ideals. Within that week, we signed with STB. The STB Family is real. We’re so stoked to be a part of this movement. It’s home.

OOTS – Did you have any involvement with the final design of the Vinyls or Cassettes. Or was this left down to Steve STB.

YOTC - We definitely had involvement. Steve wouldn’t have it any other way. Before we even recorded, right when first signed with Steve, he was chatting with us separately just to figure out who we were as people and our take on the band. It’s important to him to make sure the band is represented properly, not in the image that he wants, but in the image that the band wants. He’s the real deal, all heart.

TN - The album crossovers and melds many genres from Doom, Stoner, Psych, and Sludge. How would you classify the album's sound? Your thoughts on the use of the Doom/Stoner Rock designation which many describe your album as?

YOTC - The album does have many crossovers. We intended it to be slightly diverse, to shake things up a bit. Our main shared background is hardcore punk, but as individuals, our musical tastes span the spectrum which helps when we’re writing music. We’re willing to move in whatever direction the song takes us.

YOTC - That’s a good one….. I don’t think anyone should have a “guilty pleasure”. Music is music, you like what you like. Don’t give a shit what people think and don’t be ashamed. We could go on forever about current bands we love. We play out a lot and have toured quite a bit this past year and are always in awe of the talent that we’re surrounded by, not to mention the cool people we meet.

TN - Will you be hitting the road on an extensive tour to support the album or have multiple, shorter outings? For my own selfish reason, will you be coming to Southern California to play??

YOTC - We have some short tours planned in the near future. A west coast tour the end of this year (2016) with Mos Generator and Castle, and Europe in March and again in April/May. So far, no plans to play LA, but it is on our list. We’ll definitely do a full US tour for summer of 2017 again like we did this year.

OOTS – How hard is it for you to tour and perform with Year Of The Cobra especially with your young family. Are your kids proud and happy of their “Rockstar Parents”.

YOTC - Our family is always our first concern, but to have a happy family, we both feel it is important for us to focus on things that fulfil us as well. We’re just both lucky (and unlucky) that we want to do the same thing. We believe it’s important for us to show our kids that we’re willing to work hard on something that we believe in and hopefully, they find the same drive in whatever fulfils them.

TN – You've only been going as a band for about 20 months or so. Has is it surprised you the responses you've received for your music from the Doom/Stoner Metal community. Looking back then did you ever think you would be releasing your debut album.

YOTC - We started the band because we just wanted to play music we both loved and somehow, we found a crowd that happens to like it too. Whatever happens, we will always write and play music. Hopefully, it will be music that resonates with others as much as it does with us. 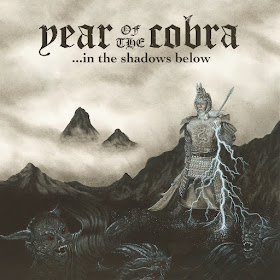 OOTS – Who designed the awesome artwork for the album. How much input did you have into the final design of the artwork.

YOTC - The artwork for the album was designed by our good friend, Esther Heckman. She is one of the most amazing artists we have ever met. She doesn’t normally do album art, but we sent her one song off the album as inspiration (Electric Warrior) and gave her no direction. Everything after that was her own creation.

OOTS – For a Drum/Bass Duo. You have quite a loud sound compared to other Drum/Bass duos. How do you create this sound. Do you use an advanced setup or basic setup when recording and playing live.

YOTC - It was important for us to sound big because being a duo is very limiting. Amy’s setup is very fluid. She can find a setup that works for the moment, but is constantly on the lookout for something that can help advance it. Splitting the bass tones was a no brainer, but finding the right amp/cabinet and pedal combination was much harder. It is always in flux.

OOTS/TN – We both wish you every success with it. As it's a fantastic album that will no doubt receive a ton of praise when it's fully released. Do you have anything to say to your fans before we go.

YOTC - We just want to thank everyone. We’re so appreciative of the response we’ve received so far. We have put so much heart into this project, it’s nice to see that other people like it as well. Many thanks to you, Steve and Matthew, for the killer review and for doing this interview.

Words by Steve Howe, Matthew Thomas and Year Of The Cobra

Thanks to Amy and Jon for taking the time out talking to Matthew and myself. ...In The Shadows Below will be available to buy on Cassette/CD/DD/Vinyl via STB Records from October 29th 2016.