Dave Sherman is the man who put a damned lot of effort to raise the doom scene fighting back to back with other American doom heroes. In the early ‘90s, he was in Wretched, then added his energy to the rocky flow of Spirit Caravan. Earthride turned out to be a kind of his anger management course since 2000, but it wasn’t enough and he started one more doom band named Weed Is Weed in around 2005.

Did you know that he joined The Obsessed a few months ago? I bet you didn’t! So even though Dave was busy with celebrating his birthday on 16th of October, he somehow found some time to answer my questions about the bands he involved in. 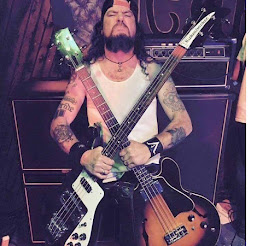 Hi Dave! First of all, thanks for your time! Your name is tied to a lot of bands, can you clarify - which ones are the most active ones for you today?

The Obsessed, Weed is Weed, Earthride, and PillBilly which is one of my new projects. It has this country and western thing going on and features Ed Brown on Bass ..

So there are these rumours that The Obsessed are preparing new full-length album with the working title “Sacred” and you're on board. How does the writing process go? What's your progress?

Yes – The Obsessed recently reformed from the band Spirit Caravan with Brian Constantino, on drums. We signed with Relapse Records and we have been in the studio recording. It has 14 songs, two cover songs Mountain: Crossroader and Thin Lizzy: It’s Only Money. It has one old song and 11 new ones.

The Obsessed is a well known band, and I believe that you already have the label who'd like to release the album. Do you have now schedule consider the tour dates and the date of release? Do you feel yourself as a serious guy doing a serious business?

As I indicated we are now signed with Relapse Records. The album release date will sometime in February 2017. I always take whatever I do seriously in my music. I put my heart and soul in it.

How much of Earthride will be in the next album of The Obsessed? How do you share your duties in the band?

There will not be any Earthride influences on this album, as it is a totally different band. Wino will be doing most of the vocal duties and wrote the material.

Spirit Caravan stopped their journey on some point but The Obsessed returns, what does differ one band from another for you? Can you say that they both have really different souls?

Yes, Spirit Caravan is more a stoner rock band with a positive edge as The Obsessed is more punk rock doom band.

Since 1999 you play with Earthride, it’s known by its crude, nearly anarchic doom - a kind of Motorhead of doom. What did you put in the band? What was your primary goal when you started it?

Motorhead and Black Sabbath had a baby and it was called : Earthride. We are thinking about getting it back together again. Eric Little and I have been talking about writing a new album. Yes, Kyle Van Steinburg had monster riffs and an amazing tone. That is only one of the reasons Earthride stands out. The song writing is in an old school way, which makes it more authentic. My gurgle with glass vocals stand out.

What made you switch the efforts from Earthride to Weed Is Weed?

Weed is Weed has been around for about 15 years. Earthride at that time took precedence.

I always like to keep reinventing myself, I started working hard on Weed is Weed as well. With great musicians from this area like, Gary Isom, Rob Portillo, Russ Strahan, Darren Waters, Mark Ammen, and Tyler Lee, we can create great music together. The Maryland Family. We are coming out hopefully within this year or next year with a new EP called, “The Bong Remains The Same”. So be look in’ for it, because it rocks hard and heavy.

Earthride dealt in its songs with such themes like “drugs, death, misery, struggles”. How much of you are into that?

Yes it does deal with those topics as Black Sabbath did and of course we all know what drugs can do, and that was the main reason for the bands long hiatus. I don’t consider weed a hard drug, but everything else is taboo, especially the opiates.

You played in a dozen of bands through your career, which ones were most difficult ones from technical point of view?

Spirit Caravan, The Flood Foundation with Dale Flood from Unorthodox, and The Obsessed. They are the most progressive songs to learn. There a lot of changes and weird timing signatures as far as playing the bass. Bands such as: Captain Beyond, Yes, Rush, and King Crimson.

Speaking about your past – you recorded three albums with Wretched in ‘90s, why didn’t you join the band after the reunion in 2004? Wasn’t it just important for you during that period?

The band had a good 5 year run, but the band broke up and Shine was born, which later became aka Spirit Caravan. After Spirit Caravan split up in 2002, we made up a few songs, but we couldn’t get it together, because of personal reasons.

By the way, how did you manage to play the right tunes during gigs? I’m meaning that you need to keep in your head a damned lot of tunes from all these albums you record and sometimes you even need to sing. So how seriously do you usually prepare yourself for the gigs?

We have relentless rehearsals. A lot of listening, to the material to acclimate myself with the band that I am presently working with and more rehearsals.

You were always a part of the bands who actively play live and do tours, what are your main rules of surviving on tour?

Drink a lot of water, and try and stay as healthy as you can, because there is a lot of time in the van and in between venues so you have to think of ways to amuse yourself, and there is a lot of joking around. When you are working in close quarters it is hard for you to pick up your instrument to play. On the road I have been Bass Player, driver, tour manager, and roadie.

Booze or drugs? What do grant best inspiration?

To be truthful with you I don’t need either for inspiration. My inspiration for my music comes from living it with my Heart and Soul. To me music is the breath of my life.

What do you feel being the part of doom scene's history? Does it still bring fun or does it become boring over the years? Do you feel pressure because people expect more from you?

It is an honor to be recognized by my peers, but I have done a lot of work to get this far. the The war is never over and you have to keep battling on. It never becomes boring because there are new songs to be written and new riffs to come up with. It is an endless journey. No, I don’t feel pressure anymore because, like a fine wine you only improve with age.

Okay, let's sum up - what are your plans for the bands your currently involved with in the nearby future?

Be look’in for the new Weed is Weed record sometime this year. I am also working on a new project which will be called “PillBilly.” PillBilly has a country folk favor like Hank III, and Bob Wayne. It will include Ed Brown, Bass & vocals, Thane Farace, guitar & vocals, and myself on cigar box guitar, six string acoustic, and vocals. It is going to be a whole lot of fun in the coming year. Hopefully I will be on tour with one of these bands. As everyone knows I am always on the move.