MotherSloth! What’s the name! Here in Russia we have a proverb about “mummy sloth” who makes one postpone their cases and lay back doing nothing. The Spanish power trio is pretty active indeed.

“Moon Omen” is their second full-length release and it seen the light of day on March 3rd with the help of Argonauta Records. “Shadow Witch”, “Doomsday Cyborg”, “Moon Omen” are nice names for nice doom songs, isn’t it? Low and distorted riffs, melodic tunes and mammoth heaviness – these are the features of new MotherSloth.

They’re bulky, they’re psychedelic, they’re professionals who naturally deliver really cogent stuff. I had few questions to the band, and suddenly guys took a decision to answer as a whole band. Let me introduce you Oscar (drums), Dani (guitars, vocals) and Moline (bass)!

Salute MotherSloth! How are you? What's going on in your camp?

Dani: Yeah! Moon Omen is on the street fresh out of the oven!

The thing I must ask you first is the origin of band's name, it sounds very Russian. We have a kind of proverb here about “mommy sloth”; so how did you figure out it?

Oscar: Nothing to do with Russia or proverbs, we just tried to find words related to the concepts of slow motion, laziness, and try to reflect that with a sound. Sloths are fun animals to watch by the way!

Dani: I’m going to look into that “mommy sloth” thing!

I remember how tight and solid the band did sound on “Moribund Star” debut. How long did that previous lineup members know each other?

Oscar: We started in 2008, but I reckon the sound is more a thing related to the fact that we did not want to add many spices to our recipe, we wanted it to be raw and heavy.

What did influence on your vision of how the band must sound? What are your main requirements to your own songs?

Oscar: We basically start from different points every time, not necessarily with an idea in mind, often we let the song take us somewhere, so there are not many rules to follow, as long as the result pleases us.

Dani: Lately, I imagine guitar riffs out of nowhere, and then months down the road, I start figuring out the indirect influences from where they might have come from. But I’m happy it’s not a thing about sounding like a certain band already out there.

Moline: Freedom. I guess it's better to just follow the song wherever it takes you.

It seems that you love distortion and different sound effects. What makes you pay so much attention to it?

Oscar: Actually, we started trying those sounds in the studio, our producer Adrian Hidalgo suggested we use them and we ended up adding those. The same for the bass guitar, we wanted it to literally blow your speakers. If we could add distortion to the drums, it would be there!

Dani: we want to add a gong to the live show, and already have a theremin going on as well.

Oscar: Haha, a gong!! That would be fun to play! 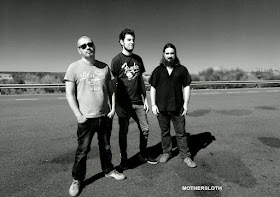 MotherSloth started as an almost absolutely instrumental band, there's just one track with vocals on “Moribund Star”. Now you have “Moon Omen”, and there are a lot of vocals! What happened?

Oscar: Not entirely true, our first studio work, was an EP called Hazy Blur of Life, check it out.
What happened was, the singer left us and we really wanted to continue, and not wait until another singer appeared so we started working on many songs we had that were instrumental. Luckily Dani joined in time to sing Dry Tears on our first LP.

Dani: I was a big fan before joining the band, I remember I went to see MotherSloth live in Madrid when I came back from living in Berlin and I recalled the band being so much better when it had a stable formation. I thought I could help by joining in and giving a stable voice to the project again, and it seems like it’s working so far!

You recorded this album with new bass-player Adrian Moline, how did this record session differ from the one you spent making “Moribund Star”?

Oscar: It was very different, our previous bass player Alex, was really a guitar player, so he did what he could. Before him, we had Ivan on bass, who recorded the song Death Flower for that album, and soon left the band. Adrian is an awesome bass player with a proper bassist feel and dexterity so it was an entirely different situation.

Your way to “Moon Omen” took almost 3 years, how did you spend this period? And do you have some completed tracks that weren’t included in the album?

Oscar: We started MotherSloth with the intention of recording one album per year. Unfortunately, this has not been possible to do in the practice although we had plenty of material to choose from. It has been basically a time of personnel changes and plans that had not been achieved. For this album, we had a couple of songs that were not completed, written by the previous guitarist, we simply decided not to use them and moved on from there.

Dani: MotherSloth has a demo archive larger than the Kilimanjaro, the only thing in the way of recording was the constant lineup change. But that’s cleared out of the way for good now, there will soon be a 4th album!

What did you want to express through this material both lyrically and technically?

Oscar: We wanted to go back to our musical roots. On Moribund Star we were in the middle of a journey, one that took us to desert sounds, stoner if you want to use a label. But in the past, we had more of a doom vibe, and I wanted to recuperate it.

Some of the lyrics are based on personal experiences, dreams, others are based on fantasy, we would love to be able create our own mythology with names, places and things like that. We had a concept for the album but we did not want it to be a conceptual album with linked songs. But we feel happy we have been able to express and suggest this concept musically, as some people had told us.

I just read a couple of reviews where it says our music has a Dario Argento vibe, you know, Italian horror films, perhaps all those elements that are present in your background as an artist start to slip in at a point and then you have a mix of influences , in our case, sci-fi, horror flicks, comics, literature. I guess those elements can also be felt in what we do. 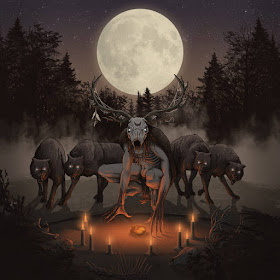 What's the band's evolution on Moon Omen? How do you feel objective signs of your growth?

Dani: Well, a good sign of our growth is that we have Argonauta Records (Italy), Stone Groove Records (USA) and Voodoo Chamber Records (Germany) backing us up with our releases. And the album is selling from the US all the way to Japan and Australia. We’ve gotta keep it up!

Oscar: Another thing can be the fact that we now feel very comfortable working together and are able to take decisions quickly, in this year and the last one the band has been very active and we are ready to make a step forward into the next level.

How much of Spain is in your music?

Dani: Well, we love Spain, but it is hard to get your music out there over here, there are a lot of classic heavy metal fans, but for other metal styles the audience is a minority. In Moribund Star there was a clear Spanish influence, but I think Moon Omen has gone back to our American roots (USA, Perú).

Moline: There’s a growing underground Stoner scene around here. Lots of bands that make you trip and also shake your booty. That gives me hope that Doom is next!

Let’s resume – what are MotherSloth plans for 2017?

Oscar: Touring, in the summer we will finish writing our next album, we are already working on some ideas such as artwork and some songs are ready. Some of them will definitely be played in our upcoming shows.

This year will also see our first video clip, done also independently with the help of Cow Army prod, for the song Shadow Witch. We are happy with the results , and are thinking of doing another one. Visuals are a great way to express ideas and concepts too, something to add to our songs . It's the perfect element to enhance our music and make your trip complete.

Dani: Yeah! The 4th album in our minds and plans. We have gained a lot of momentum!

Words by Aleks Evdokimov and MotherSloth