An Interview with Tom from MAGE

Mage are known as a damned tight and heavy doom / stoner band since its founding in 2010. Born in Leicester, England Mage recorded two albums “Black Sands” (2012) and “Last Orders” (2014) and then slowed down their activity.

One of the band’s features was twin guitars sets performed by Woody and Ben, and when Ben passed away in August 2015, the band was on a verge of disbanding. However they took their time and this comeback with third full-length album named “Green” has became some sort of surprise.

I got in touch with Mage’s vocalist Tom to discuss latest news from the band.

Hi Tom! How are you? What's going on in Mage's camp?

Hi! I’d have to say it’s busy. We had a bit of a break over Christmas and New Year’s but then it was back to working on the last bit of the Pledge Music campaign and getting ready for CD production.

Mage was almost disbanded some time ago, but after hiatus you're returning with new a album in your hands. What did motivate you to continue?

A band member passing away certainly makes you consider if you can carry on but we all agreed pretty quickly that we had to try. For the sake of Ben’s legacy if nothing else. So the only real difficulty was figuring out how to carry on. I would say that finding our sound again and discovering that we could still write has been the biggest motivator to continue.

One of band's features was bundle of twin guitars. How did you solve this situation on Green?

Well we’ve always had multiple layers of guitars on our releases. All it meant this time was that Woody had twice the work to do than before. So hopefully the album sound isn’t too different. The biggest challenge has been playing the tracks live. But again, our live sound has always been different from our recording sound, so we don’t worry about it too much. I recommend anyone who has only heard our recordings should come and see us live for the full Mage experience.

How were these new songs born? Did the process differ from the work over Last Orders?

Our process hasn’t changed too much really. We’re quite laid back about writing. We just tend to jam a riff until it evolves naturally or until we decide it can’t go anywhere.
By the way, why is it Green?

Because “Green is where I want to be”?

How far did you go with new album from the band that you were one year ago?

The biggest difference on the new album is the addition of guest vocals by Raging Speedhorn’s John Loughlin. We’d thought about it for Last Orders but I knew there were tracks on the new album that would definitely benefit from his more aggressive vocal style. Thankfully we managed to make it happen this time and we couldn’t be happier with his contributions.

Another difference on Green is the themes. I’ve kept Mage fairly whimsical until now. Sticking to exploring things like sci-fi, fantasy, religious and good old fashioned stoner concepts. But, probably not surprisingly, some more personal content came out on the tracks written since Ben passed.

Did you try something new in studio this time? Indeed Green sounds like if you continue right from the point where it ends on Last Orders.

The recording process was very similar to Last Orders. Personally I put a lot more emotion into the vocals and experimented with a few different ideas as we went along.

What are your requirements to Mage's sound? What are its necessary components and how would you like to evolve it?

Our recording and live sounds are not the same because of the layers we put on a recording but volume and depth are our main aims for both and I think we achieve that. 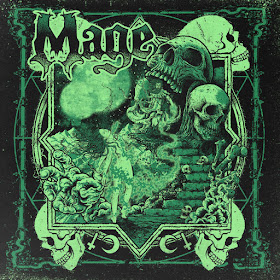 Why did you decide to share it through pledge music?

We are essentially a self-funded band. We’re not signed, we have no management and any money we spend on recording, merch and gigs comes out of our band fund and our own pockets. Pledge Music is a crowd funding site which was initially set up to help musicians like ourselves be able to get into a studio and release their music, as well as connecting with those fans that pledge in a new way.

As we wanted to do the best job we could on the new album, we thought it was worth a shot and it paid off big time. We reached our goal in less than a month and we’ve managed to produce an album that we really wouldn’t have been able to without that support. We’re extremely grateful.

Do you already have a date of Green official release? And do you have label for it?

We have an album launch show at Firebug in our home city of Leicester on March 18th, which is our official release date for the album.

What are the closest Mage's gigs you could announce?

We’re supporting Crowbar in Birmingham on March 16th then it’s our album launch show on the 18th. After that we have something most months. In June we’re doing a mini tour with Garganjua. Just four days up and down the country. It will be our first time doing a run of more than two days.

How usually you do organize gigs? What do you care about?

Being an unsigned, nonprofessional band we are pretty much just accepting offers of gigs. In a few cases we pursue them (like the Crowbar gig and festivals) but with work and families we don’t have the luxury of playing every show we’d like to.

Also how far did you get with Mage? Can you tell that it's demanded as live band?

Things have definitely taken off since Bloodstock last year. We’ve been very grateful to be inundated with gig offers. We’ve not been able to accept them all but we hope they keep coming and we’ve been able to book a nice, steady flow of shows for the rest of the year.

Okay, thanks for your time and answers Tom! How would you like to resume our conversation? What’s ultimate message of Mage for 2017?

I would just say thanks to everyone for all the support, especially in the last two years and we hope to see you on the road sometime soon.

Green is now up for pre-order on Mage’s Bandcamp: https://mage.bandcamp.com