Devil from Norway started in 2010 with old school fashioned doom rock demo “Megister Mundi Xum”, and its themes were developed just one year later in debut album “Time to Repent”.

Lo-fi production, straightforward approach and few nice melodies didn't create band's reputation, but Devil were soon noticed. “Gather the Sinners” (2013) improved their position in doom rock underground as they improved their skills in more effective songwriting, but other aspects of sophomore album demonstrated that Devil remains the same.

The band conjured over their sound for three more years, and new record “To the Gallows” is the album that deserves the attention of those who are in love with charged NWOBHM and classic doom, even though the last one presents in lesser scale than before. So let's have some fun and try to invoke Devil tonight through modern technologies!

Hello there! Stian (guitar) here. These days we mostly wait for reviews and the finished products, and doing some nice interviews every now and then. And at this exact moment we’re making a new email address, as we can’t get access to our old one. HA HA.

Your previous album Gather the Sinners was released in 2013, and only now, 4 years after, you return with the third full-length record To The Gallows. Why so long?

We set aim for doing an album every second year, but we actually didn’t have time between work, kids, other obligations, etc. The songs had been more or less finished for a long time, but we used a long time before we went into recordings. But we’re in no rush, so we really don’t mind either.

Devil – To the Gallows

By the way, did you feel that Gather the Sinners brought the band some success, some recognition?

We were happy with it ourselves, but I think it suffered a bit as “the difficult second album”. You know, the moment of surprise was gone, and the scene was flooded with great bands already, and since we don’t do much to promote stuff either, it never reached out. Then again, I think the new album is much better too, so I have higher hopes for this, even though there were some great songs on GtS, such as Southern Sun and Ladies of the Night.

Did you really feel that pressure knowing that there is a lot of new bands who play nearly same way appear in the same period? Did you take it in account when you were writing new material?

No, we really can’t let that influence us. You know, these younger guys and gals have the dreams, ambitions and not least time to put so much more effort into it than us. We’re happy being kinda the old weird uncle of the family. But I do hope we influenced someone down the road!

What do you see as strong sides of Gather the Sinners? How do you see development of Devil's features from the debut album to the second one?

The songwriting on Gather the Sinners is on many occasions more advanced than Time To Repent. Whilst it perhaps lack a little of the “jolly” feeling on Time To Repent. On the new album we like to think we’ve combined the good songwriting with the jolly mood that we’ve been more or less known for. If you can use “known” about a band as small as us, haha.

With new songs you go further to classic heavy metal ideals, as the band is tagged sometimes as a doom metal band. How do you see it?

We started out as PLANNING a doom metal band, but we soon discovered that we would genre wise be all over the place. So I think maybe heavy rock is more describing. But we have some doom songs, of course, such as Beyond the Gate, etc. I think that the more heavy metal edge to this album is because of more influence from Joakim. He was totally new to this band thing when we started, but now he has started to give feedback and input, and he’s a heavy metal guy. And besides, we listen to different stuff from year to year, and maybe we were in a heavy metal place this time.

Are you meaning that Devil is a democratic band and you don't have a main dude who speaks that you need to play here and there?

Very much so. As we talked about earlier, we don’t have the ambitions that demands us to be pushing anything. If I can’t go to let’s say Wacken one year, then we won’t play if we’re offered. The harmony within the group is so much more important than the visions.

To the Gallows have a better production than your previous works, did you consciously took this step further? Was this lo-fi sound of previous albums something that you intended to keep further?

Well, that’s always a tough choice. As a musician you seek to evolve and experience in one direction or another, but the audience always wants you to keep the little something that they fell for in the first place. It’s like a relationship. I once heard that a man goes into a relationship hoping the woman will stay the same, while the woman goes into a relationship hoping the man will change. Haha. Someone will probably take offence by that, but shit in one hand and be offended in the other and see which hand fills up first. However, when recording GtS we used a studio for the first time, for bass guitar and drums. And the guys liked that, so we did the same now. Personally I love the feel of the demo, but it’s no big issue for me. I also don’t think it’s very polished still, so people don’t have to worry we suddenly sounds like Disturbed.

What do you seek to take from NWOBHM era when you write songs for Devil? What are its necessary elements?

We don’t go for anything intentionally. But the title song turned out pretty NWOBHM, so we can’t deny that. Thomas who wrote it was probably in an early Iron Maiden mood. But the elements are always the riff, combined with catchy melody lines, and always searching for the rhythm section adding to the song, rather than keeping the steady beat. I always say to Ronny that he should play the drums as he would play the guitar. Play riffs on the drums. And I think it works.

Where did you record To the Gallows? How did this session differ from previous ones?

Vocals in the rehearsal room, guitars at Kai’s home and bass/drums in Black Dimensions Studios in Karmøy, run by Stein, a good friend of ours.

Did you work with producer or did you trust your tastes enough to do the whole process DIY?

Stein gave us a helping hand with mixing and mastering, other than that we trust ourselves. After all, we have a pretty good idea on how we want it to sound, and we’re not too concerned about what other people might think. 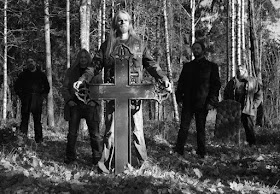 Your songs are usually connected with medieval aesthetics, but here for example you have the songs Trenches. I guess that it is about more modern warfare. What did inspire you to write this one?

Trenches is about trying to put oneself into the situation that a lot of young men experienced in WWI. Of all the nightmarish scenarios during history, I think that one is one of the most terrifying. As for our medieval fascination, I think most of our songs could be set in any era, but there’s something appealing about making the scene for them into the dark ages.

Did you relatives take part in WW II? Do you feel that any sort of music needs to rise up such realistic topics?

Yes, my grandfather died in Bergenbelsen. He fell out of his watchtower. No, seriously, I think it’s alright to break out of the dragons, Vikings and beer dripping universes every now and then. It also adds more punch to the fun stuff, if you can show that you have the ability to be serious. It’s not like we’re clowns 24/7, or lives at the bar.

How would you sum up the general plot of other songs?

Well, to take a few; David and Goliath is about the biblical story. It was actually written for a concept split that never happened. Cemetery Still is about moon-shining (yeehaw). Regulators is inspired by the marvelous western movie Young Guns.

Wow! Even western! Didn’t you ever record a song inspired by horror movies?

Of course. We done a lot of that too. Peasants & Pitchforks are inspired by Frankenstein, to give an example. In Southern Sun from the prior album we even have a reference to the mini series North and South… I know, we’re nerds.

Do you plan a tour to support the release? What are the biggest shows you ever play till now?

We don’t have any plans yet. I am pretty sure we won’t tour, but would be nice to do a couple of gigs at home, and a couple abroad. As you probably remember from tour Sludgelord days, we did some cool shows around the first album. Roadburn, Hammer of Doom, touring with ElWiz, Hole in the Sky, Inferno, Karmøygeddon, etc. All of those were great in their way, but the biggest audience was probably Hammer of Doom.

What does the image of Devil mean for you?

Besides the logo we don’t have much of an image apart from our everyday look. We look the same at work, at parties, on stage, etc. We are kinda deep into this heavy metal lifestyle. It’s nothing we put on together with the guitar.

How did your relatives react when you told them in which band you play? :)

Haha! I don’t think many of my relatives have heard Devil. But I have two nieces and a nephew that thinks it’s cool their uncle plays in a rock band. However they think everything from Nickelback to Cannibal Corpse is Devil when they hear it….

You can order To The Gallows from Soulseller Records here: