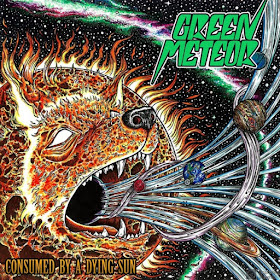 Consumed By A Dying Sun – Tracklisting

Another day and time for another release from Argonauta Records. This time with Green Meteor's debut album - Consumed By A Dying Sun. A band that play cosmic and spaced out Psychedelic Stoner/Sludge riffs. A band influenced by some of the most notable legendary bands of the last twenty to thirty years or so but with a more space rock edge.

Opening track - Acute Emerald Elevation - is a strong song to open the album with as it shows you the full picture of Green Meteor with heavy distorted SLEEP style riffs with a high amount of distortion being added at different parts of the song. The vocals adds different touch as I haven't heard many female led vocals within the Spaced Out Stoner Rock field. The psychedelic noises add a nice touch with the riffs and vocals building up to a heavy momentum. The lyrics aren't the most original you'll ever hear but they get the job done as Green Meteor providing a thrilling song to open the album with.

Second track - Sleepless Lunar Dawn - adds a spoken word soundclip that matches the out of world atmospherics the band are currently creating. This is perhaps the standout song on the album as Green Meteor create a barrage of fast paced riffs with the heavy guitars and drumming interacting almost perfectly with each other. The song lasts for ten minutes and you can't help but lose yourself in the epic spaced out riffs. The vocals impress yet again with a more confident approach compared to the opening track. The song offers its fair share of slow paced and fast paced riffs. Green Meteor impresses the most with the faster style of riffs as their music has a sense of urgency about them. The music becomes more focused as the band leaves the distorted noises behind.

Third track - In The Shadow Of Saturn - sees Green Meteor return to heavier distorted sound they opened the album with. This is a much more doomier and sludgier effort from the band. I don't know if it's just me but one part of the song sounds very familiar to Nirvana at times. Very good idea if this was intentional.

The production of the album is good though there are a few parts where everything is too quiet at times. Other than that, Consumed By A Dying Sun is a loud, boisterous and thrilling album from start to finish. This will appeal to a wide range of fans within the Doom/Sludge/Stoner Metal community.

Thanks to NeeCee Agency for the promo. Consumed By A Dying Sun will be available to buy on CD/DD via Argonauta Records from April 21st 2017.