An Interview with Nick DiSalvo from ELDER

Elder turned the Doom/Stoner Metal world on it's head back in 2015 when they released the critically acclaimed album – Lore. It was an album that you couldn't get away from. It was the Stoner Metal album of 2015 which established Elder as a force to be reckoned with.

The band went on an extensive tour promoting Lore in both Europe and the United States. Now fast forward to 2017, Elder are back with their upcoming new album – Reflections Of A Floating World. Due for release in June 2017 via Stickman Records, this is another different sounding album from Elder. With the band focusing on 70s Psych and Classic Rock sounds whilst still maintaining the epic sounds they created on Lore.

I managed to catch up with Nick DiSalvo (Vocals/Guitar) from the band and this is what we discussed....

Hi Nick, Congrats on your new album – Reflections Of A Floating World. Another great album from Elder. What can people expect from the album.

Thank you. Reflections is a typical Elder record, in the sense that it's different than all the others. On paper the record could be described as psychedelic, progressive heavy rock with elements of all sorts of subgenres creeping in, like doom, stoner rock, krautrock, etc. I think we are getting better at achieving our aims of writing songs that play out like stories, or convey images, something more descriptive than simple rock songs.

The new album is very different to Lore. More rooted in 70s Psych/Classic Rock though still offering that classic Elder sound. Was that the original plan with the new album. Release something that wasn't Lore Part 2.

There has never been a plan for where the band will go or what we'll sound like, but I think we hit something close to our "own" sound on Lore and in certain ways I see Reflections as a logical step from it, a little more cohesive, sprawling but in a different way, experimental with different sounds. We have a simple plan: write music that we enjoy. That is the only plan we follow for the records.

Did you do anything differently recording this album compared to your previous albums.

The studio sessions for this record were still quite controlled, but for our standards we gave ourselves much more time and room for experimentation than usual. We had already decided prior to recording the album that we would be adding a fourth member and were as a result less concerned with how elaborated the songs became because we could play them live. That let us put in more keys, more guitars, etc.

We also brought in some guests for a recording session, our friends Mike Risberg (who is now our 4th member) and Mike Samos (doing pedal steel). We set aside a day to do some live improvisational recordings in this 5 piece configuration and got an additional 3 hours of material out of it that we sprinkled in the album, and the rest will probably be used for a bonus release down the road.

Was it an easy or hard recording experience when making the album.

I wouldn't put recording music in terms of easy or hard... it's a challenge sometimes to realize your visions of how things should sound, but it's an extremely fun and rewarding task to hear your ideas materialize before your ears. We had a blast tweaking amps and settings, doing live recordings, and spending a lot more time picking apart the recordings than we ever have and I'm more satisfied with the results than I've ever been. 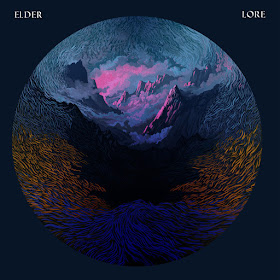 What influenced you when recording this album. As the album has some complex themes running throughout.

Musically speaking, there are no set influences that inform my songwriting and we're almost never (directly) inspired by listening to other music. I try to shut out everything else when writing intensively and see what comes out, which is a process that I used for Lore as well. Thematically speaking, the album is meant to be seen as a series of vignettes portraying aspects about our world and how we make our own realities. “The floating world” is a term translated from Japanese that referred to the hedonistic, but also culturally creative aspects of their society during its period of modernization.

This album is made up of my own “reflections”, excuse the pun, about our own “floating world”, which seems a grossly decadent, self-destructively capitalist, consumption driven madhouse. The songs are about breaking free of this reality, living on your own terms, and coming to an understanding of what it means to live in a world devoid of intrinsic meaning.

Did you feel any pressure when recording the album as Lore was such a huge success for Elder.

Not really. We took our time with the album and never approached the studio until we were sure that the songs were finished and we were satisfied with them. If our listeners appreciate the music then we're grateful, but as a creative person you can't let other people's expectations or taste steer your own direction.

Looking back on Lore, did it surprise you the way critics and fans reacted to the album in general. I consider it a modern classic. When I first heard it – my first thoughts were – HOLY FUCK!!!.

I am surprised that Lore got us the attention that it did, but looking back on it, I had the same feeling of accomplishment and satisfaction then that I do now. Mostly I'm surprised at the comparisons that album garnered, mostly to bands we've never listened to or had anything to do with. 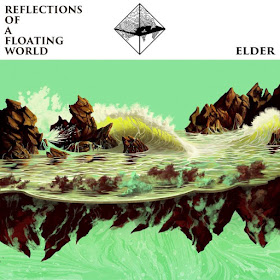 I think the album cover makes the album stand out. Who designed the cover. Did you have much input into the final version.

Our album art is always done by Adrian Dexter (except for the Spires Burn/Release EP). He's always been our artist and we give each other input into each other's work during the songwriting/album art creation process and feel like he's a member of the group in some way. At the same time, we never tell him what to make the artwork like because it's important to us that he has creative control.

How hard is it being a band in today's world. What are the most difficult aspects in being in a band.

It's hard to carve yourself a niche in the world of rock and roll today because everything is so quickly played out and attention spans are sometimes very short. I feel grateful that we started playing when we did because I think we were just ahead of the curve for when the “stoner rock bubble” began to blow up. It's hard to make a name for yourself if there are a million other bands doing the same schtick. For us, playing music is our life; we've literally tailored everything else around our creative pursuit. I wouldn't live any other way, but it's hard to eke out an existence if you're essentially a worldwide musical freelancer.

It strains relationships, leads to unhealthy living, and its hard to find a balance between the worlds of touring and being off the road. For us, it's also very important to maintain our integrity, to never compromise what we do and refuse to whore ourselves out. That's not always easy in the world of social media and we probably make things harder on ourselves as a result of (mainly my) stubbornness. All in all though playing music gives my life meaning and the good outweighs the bad many times over.

Will you be doing an extensive tour for this album like you did for Lore. Or will you be taking things much easier.

We learned after our non-stop touring following Lore that it's not conducive to our mental or physical health to be out so much, but we still plan to tour quite a bit. We've got a month in Europe planned for the summer followed by a US tour in October, and we're talking about getting to some other continents as well.

Elder have been going as a band since 2006. Did you ever imagine the journey that it has took you on. Would you change anything you accomplished with Elder.

I absolutely never imagined in my wildest teenage dreams that we would actually be doing what we are doing now. We quite literally live our childhood fantasies and I would not change a thing about our course (except for a few poorly negotiated contracts, hehe...). 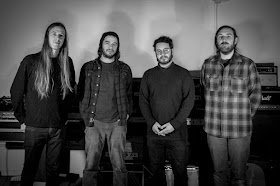 I am currently drums playing in a Berlin-based band called VUG. We just recorded an album and are mixing it right now. It's a fun mix of faster proto-metal riffs with a lot of melodic heavy stoner-ish rock thrown in. I'm actually not sure what Matt's up to or the status of KIND right now, but he's always jamming with lots of people. He likes to make weird recordings with synthesizers and crazy guitar pedals too. Maybe we'll get to hear it one day.

Thanks for reading, support your local record store and don't let the man get you down!

Nick, thanks for doing this. All the best with the new album as its' a brilliant album.

Reflections Of A Floating World will be available to buy on CD/DD/Vinyl via Stickman Records from June 2nd 2017.