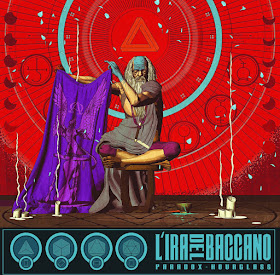 The first track - Paradox Hourglass Part One - is LBD at their most addictive as they create heavy doom based sounds. The album feels like a natural progression from their last album. As the sound is very familiar if you're already a fan of the band. The instrumental work is superb and LDB show a keen eye for experimentation with their sound. This album isn't as heavy as previous albums as LDB play a more mellow style.

Second track - Paradox Hourglass Part Two - has a more jazz style approach. The song takes time to fully get going but once it does the band don't disappoint with dazzling riffs spliced with the top-notch drumming present throughout the album.

The final two tracks Abilene and The Blind Phoenix Rises is the exciting part of the album as the songs have a fresher feel than the opening two tracks. LDB feel they're having more fun with their music on the final two songs. They have a more interesting dynamic and feel more complete with the heavy instrumental sounds reaching their natural conclusion.

If you're a long time of this great band then no doubt you will find much to enjoy here. If you're new to the world of LDB then this is the best place to start as it offers the most perfect insight of what this band is all about. It's a stylish and heavy psychedelic affair with LDB becoming one of the more interesting Instrumental Psych Rock Bands currently out there.

I will say this is perhaps the best the band have ever sounded on record. The whole feel and mood of the album never feels rushed or forced and that's down to the production of the album. I still prefer Terra 42 to Paradox Hourglass but this is still another great album from LDB. If you're a fan of classic spaced out Hawkwind style riffs merged with a heavy sounding doomy atmosphere then look no further. Paradox Hourglass is the album for you.