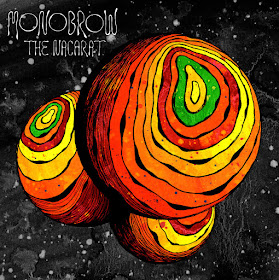 Monobrow return with another round of Instrumental Doom/Stoner Metal as their new album - The Nacarat - sees the band create their heaviest album to date. It's quite experimental in parts compared to previous albums and the band play a heavier doomier sound. There are still moments of their familiar Psych Stoner Rock riffs.

Opening Track -The First Vague Rumblings of Impending Revolution - opens with a cheering crowd before the music finally appears. Monobrow then decide to play some superb instrumental doom/stoner metal with moments of progressive rock appearing here and there. This song runs for nine minutes and it feels like it's been separated into different parts. As the song changes tone and direction at different times of the song. It can be slightly depressing and gloomy near the middle.

The second track - Capes and Monocles - is an even longer track at fourteen minutes in length. It has a similar structure as the opening track but it's good to hear Monobrow return to their earlier Stoner Rock sounds. Though the band do add moments of trippy cosmic rock. The song is played at a fast pace but the band do slow things down to add more elements of progressive rock.

This is perhaps the standout track on the album. As it has flashes of real genius at times especially when the band decide to move into jam-based rock territory. Shades Of Earthless can be heard at times and even Karma To Burn but this is Monobrow's album to show you all what they can really do. The album has it's fair share of bleak moments but the heavy riffs are never too far behind.

The album is a concept album of sorts. You can tell this by the intriguing song titles and how the album is put together. Long-time fans of the band may have a hard time getting used to their new style of music at first. My advice, give it time as this is an album that needs multiple listens to understand the full scope of it all.

The remaining three tracks follow the same exciting path as the two opening tracks though the band show a fine eye for detail on the two final songs which both run for about fifteen mins each. As the album builds up to an exciting finish with moments that feel inspired by Mastodon - Crack The Skye era.

The Nacarat is another winning album from Monobrow but it won't appeal to everyone.
If you're in the mood for a complex instrumental album then this is the album for you. Great stuff.