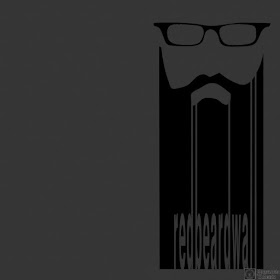 Time for another release from Argonauta Records and this time we have the debut album from Doom/Sludge/Stoner Metal duo - Red Beard Wall. I've been waiting anxiously for this album to arrive as I've thoroughly enjoyed the little teasers I've heard through social media. Now it's time for the main event. Red Beard Wall self-titled album is one that will appeal to a wide majority of the Doom/Sludge/Stoner Metal community.

Taking cues from band such as Torche, Floor and the mighty CONAN. Red Beard Wall play a more disjointed brand of Sludge/Stoner Metal. They have a very cool punk driven sound lurking in the background. Some people may have trouble getting used to the vocals. Though give that time as it gives the album quite a unique sound.

Opening track - Beauty In - has a familiar Torche/Floor feel but it has quite a solid addictive and heavy edge with the guitars working superbly well with the drums. It's an instrumental song that shows the listener what kind of music to expect on the rest of the album. The production is handled superbly well from the start.

Second track - I Am - opens with a heavy pounding riff with moments of Noise Rock allowing for the dual vocals to appear. A mixture of clean and harsh vocals work surprisingly well and this is where you start to feel the DIY Punk vibe that the band play so well. The lyrics may have a simple feel but they're strangely addictive as Red Beard Wall delve further into classic grunge sounds.

Third track - Switching Circuits - opens with a cool psych/distorted riff that allows the band to play a slower style of sludge rock. It has quite a drone based feel. but the heavy vocals are never too far behind.

Fourth track - Alive - has quite a "poppy" feel but buried under a ton of dirty heavy sludgy grunge and stoner sounds. The band have written some playful lyrics as well to make this one of the standout tracks on the album. Top marks to the production yet again as this sounds super fresh.

The whole album has quite a rebellious and playful attitude. For a duo these guys are remarkably heavy whilst creating a poppier kind of sound. Though I've now learnt that Aaron recorded this album all by himself.

Obviously Red Beard Wall aren't the first band to do this kind of sound. Nor will they be the last. I admire bands that can merge the heavier sludge sounds against a more "radio-friendly" style sound. Torche and Floor are perhaps the innovators of the sound that Red Beard Wall play so brilliantly well.

Don't worry though as Red Beard Wall are primarily a Heavy Rock/Metal band first. As the second half of the album veers into into Doom/Sludge Rock territory  with songs such as Born With A Hammer, March In Time and Beauty Out. Red Beard Wall's debut album is one of those albums that I wish was on slightly longer. As the album runs for a brisk thirty five minutes.

My final thoughts on Red Beard Wall's debut album is an exciting and action packed album with its playful take on all things Doom, Sludge and Stoner Metal. Excellent and Highly Recommended.

Thanks to Barbara at NeeCee Agency for the promo. Red Beard Wall S/T debut album will be available to buy on CD/DD via Argonauta Records from May 12th 2017.