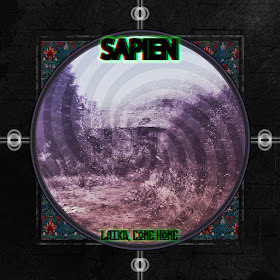 SAPIEN state this is an EP. Though Laika, Come Home lasts for 45 minutes and that's quite lengthy for an EP. If that's their definition of an EP then I would love to see their definition for a full length album. Anyway I'm digressing before I've even started the review.

So, SAPIEN are back with their 2nd EP entitled Laika, Come Home. SAPIEN play a progressive blend of Sludge, Doom and Stoner Metal with traces of Grunge and even Space Rock at times. If you're a fan of Mastodon, Orange Goblin and High On Fire then you'll feel right at home with these hugely talented bunch of Sludge/Stoner Rockers.

SAPIEN may not offer anything new or original here but Laika is still an exciting album to listen to. Sorry I mean EP. With the band creating epic riffs merged with heavy prog rock/metal grooves. The vocals are handled superbly well throughout with SAPIEN not being afraid to experiment with both their vocals and music.

The first few tracks – Elerium, Signals and Desolate Waves – show you what Sapien are fully capable of when in full flight. Heavy Psychedelic Sludge/Stoner riffs with an epic progressive spaced out feel. The instrumental work is ferocious and highly addictive and it allows SAPIEN to pay homage to their musical heroes whilst still forging their own identity. It's the spaced out psychedelic sounds that SAPIEN include within their music that makes them such an intriguing band to listen to.

The songwriting on Laika, Come Home has improved immensely since their 2013 debut EP – Toad Handler. The other tracks on the album, sorry EP – Myötähäpeä, Drudger and the epic – Laika – show that SAPIEN should be more well known within the Sludge/Stoner Metal community. Hopefully with this record or when their full length debut album is released.

As SAPIEN have a lot going for them. Huge riffs and superb ideas contained in most of the tracks on the EP. The production on the EP is good for the most part. There are a few rough parts but nothing that should stop your overall enjoyment of the EP.

All in all, Laika, Come Home is a fantastic slice of Progressive Sludge/Stoner Metal that will appeal to fans of High On Fire and Mastodon the most. Give these guys a chance as you will be pleasantly surprised.