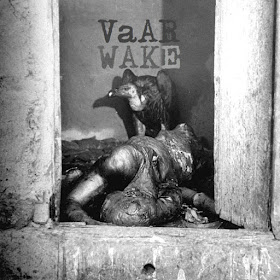 Progressive Sludge/Stoners - Vultures At Arms Reach (VAAR) - return with their new album Wake. Three years after their excellent debut album - Colossus. Wake sees VAAR return with a harsher and complex sound compared to their last album. Though the guys seem to have found a more psychedelic groove with their music. Wake is firmly rooted in the world of Progressive Sludge and Post-Metal compared to Colossus.

Opening track - The Culling - is a song that operates on many levels. Progressive Sludge/Stoner riffs built upon a hard hitting social conscience with traces of psychedelic post-rock riffs appearing here and there. The vocals are more confident from their last album. The song-writing has moved up a different level as well as VAAR seem to have built upon their previous album. The track ends with a bleak soundclip from the classic movie There Will Be Blood. It's from this point the album takes a more sinister and cautious approach with the overall themes on the album.

Third track - Cross To Bear - sounds like it could have come off the last album as it's quite a melodic piece of Sludge Rock/Metal with VAAR embracing their bleaker outlook on life. The hardcore based dual vocals are performed handled superbly well with the band performing their strongest vocal performance to date. The psychedelic noises are spliced throughout the song and it allows the whole atmosphere of the album to move further into Doom/Post-Metal territory.

Fourth track - Piecekeeper - is one of the strongest songs on the album as VAAR embrace their Sludge/Post-Metal sounds with such conviction. The band even have time to add moments of Psych Stoner Metal and one that will appeal to fans of Kowloon Walled City.

The final two songs on the album Warmonger and Wake offer the heaviest two songs on the album with VAAR becoming more confident with their harsher political outlook on life. The music is more experimental with the industrial/post-metal noises of Warmonger creating an unsettling atmosphere. Wake carries on the bleak sound from Warmonger though they do include the familiar melodic sounds from their last album.

The production on Wake is one of the albums main strengths as it sounds superb throughout. Wake is a different album to Colossus. Whilst Colossus had more melodic and stoner based sounds. Wake is a more personal and colder industrial affair. Maybe that's the point that VAAR wanted to make. To create something heavier and more primal.

Out of the two albums VAAR have released so far, I still think Colossus is the stronger album. As the band create an almost perfect blend of melodic sounds and harsher riffs. Wake contains a few moments of the same melodic sounds contained on Colossus but this is a more colder and slightly depressing album. Though Wake is still an excellent album in its own right.