An Interview With BETWEEN THE LINES

Irish Progressive Rock Band – Between The Lines – were an unknown entity to myself when I reviewed their excellent new S/T album. I was impressed how the band merge different genres of music and how they written some bleak lyrics to give their album an overall dark mood.

The album has won some minor acclaim within the Doom/Stoner Metal community. Even though the band focus on different genres of music other than Doom and Stoner Metal. I had to find out more about these guys and they kindly agreed to this interview.

Hi guys. How are things with you today.

Albert, Adrian, Mac and Conor are childhood friends who played in different bands separately and together before we started Between The Lines in late 2013. Long time bassmeister friend Eoghain joined in summer 2015 when our original one Mimmo left to pursue other ventures. We have our debut album out, done gigs around Ireland with more to follow, writing new tunes and are growing all the time.

How would you describe your overall sound. 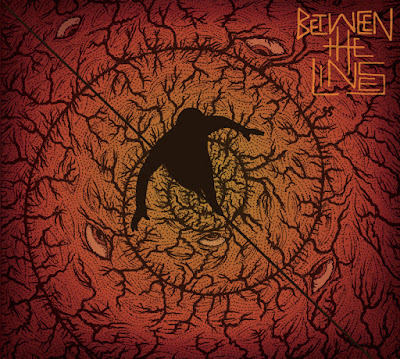 We are here to talk about your new album. What can people expect from the album.

Seven songs, forty six and a half minutes, and a broad dynamic range with a sense of transition between each. There's dark and eerie clean guitars and intricacies to crunchy and chainsaw like riffs, thumping bass, tribal-esque grooves and steady beats, introspective soulful lyrics and harmonies combined with shifts between rhythms and time signatures to create a world full of heavy atmosphere.

What influenced you all when recording the album.

Drinking, Mary Jane, and a sense of isolation in the bleak Connemara wilderness.

It's a very dark album. Was it a depressing time when recording the album. Or is it just how the album ended up sounding when you finished recording it.

No not really. It was exciting, fulfilling, and major craic! We've had these songs for a long time so to finally get them recorded after various roadblocks life deals you was immensely satisfying. There was plenty of spontaneity and ideas and sounds to experiment with at the time of recording to enhance the vibes already there.

What influences you when writing the lyrics. As like the music itself, the lyrics contain some bleak themes but also some hopeful moments as well.
Life and experiences in it. Beauty and/from pain. Honesty. Some are about a view of the world, others are about bad experiences and the struggles they can inflict, while more themes are about questioning the wisdom and understanding of certain actions and decisions.

What is the song-writing dynamic in the band. Is it a group participation or down to one individual.

It's a group participation. Initially we jam and write our own individual parts spawning from a riff, rhythm or guitar mood that sends a shiver up our spines. As it comes together we each have our own thoughts and ideas for various structures, each others instruments, and lyrics to try out different things and directions. We experiment a lot with each one and if it strikes something inside us and we feel it, it stays. It's very much twenty percent a man, we are all equal in it. 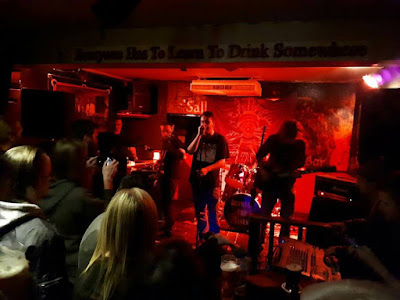 Are you all involved with different musical projects or is Between The Lines your main band.
For Albert, Mac and Adrian Between The Lines is our only band. Eoghain plays with our good mates in Ten Ton Slug and Conor has an acoustic side project with our original bass player Mimmo.

What is your musical setup when performing or recording live. Is it an advanced setup or a basis setup.

Your new album is winning some major praise within the Hard Rock/Metal community. Has that surprised you in how well the album has been received overall.

Yes a bit, very pleased also. We don't set out to please anyone but ourselves when writing. Never have, never will. We view it as once released it takes on a life of it’s own from there on in. Everyone has their own tastes so to see what we love come across in a positive light is a bit of a surprise, but a nice surprise for sure. And a big shout out from us to everyone who digs it!

How is the Hard Rock/Metal scene perceived in Republic Of Ireland. Is there a scene or community for you to perform regular or make contact with other bands.

Very healthy and active. There's tonnes of great, busy, and talented bands releasing deserve styles of rock and metal. They perform regularly at venues nationally and internationally, and at major festivals including Wacken Open Air, Download, Bloodstock, Metal Days and smaller lesser known ones. Yes a lot of bands work together with gigs and whatnot to help each other out so there is a genuine sense of camaraderie on the emerald isle.

Do you perform gigs in Republic Of Ireland regularly. Or do you have to travel further to perform on a regular basis.

Yes we play sometimes regularly, sometimes sporadically, depending on what and when offers come up. We play cities like our home-town Galway, Dublin, Cork, biker rallies, private parties and for anyone who wants to live us. We are hoping to get around more and abroad in the not too distant future so people there can live us too. 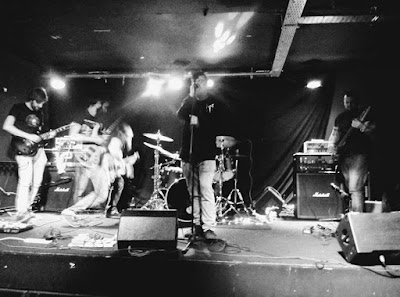 How is the music scene in both sides of Ireland generally. As Northern Ireland and Republic of Ireland have a rich history of providing amazing bands over the years. Have you performed in Northern Ireland before. If so, how has the reception been to your music.

No not yet, but we are hoping to change that soon and set forth to the north. Once again very healthy and active like the republic. Gigs are weekly and lots of local and established big names play regularly.

A big sincere shout out and thanks to everyone who has enjoys our music and comes to gigs, for all the support and enthusiasm, and for joining us on this journey wherever it may lead. ‘You gotta find that place, you know you can't replace.’

Well guys, thanks for doing this. All the best with the new album.

Cheers folks and thank you. Slainte!

Words by Steve Howe and Between The Lines