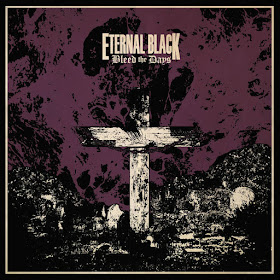 1.The Lost, The Forgotten, and The Undying
2.Snake Oil and Coffin Nails
3.Sea of Graves
4.Into Nothing
5.Stained Eyes on a Setting Sun
6.Bleed The Days
7.All Gods Fall

Eternal Black's debut album - Bleed The Days - is an epic and vintage slice of traditional doom metal with moments of modern sounding distorted stoner and fuzz. Fans of Black Sabbath and Saint Vitus will find much to enjoy here. The album opens with a long sounding horn before the doom riff kicks in that Sabbath would be mighty proud off.

Opening track - The Lost, The Unforgotten and The Undying - shows Eternal Black mean business from the start with the band creating an eerie and gloomy atmosphere. The sound is definitely vintage with the vocals adding a menacing touch. The lyrics are influenced by old-school doom metal and it's refreshing to hear. The mood is permanently dark but Eternal Black never let the music depress you as they create hard rocking moments for you to lose yourself in.

Second track - Snake Oil and Coffin Riffs - opens with a hazy and distorted psychedelic riff before the band adapt a more Stoner based sound. The vocals from Ken are more refined with a blusier approach. The song maybe too slow-paced for some though this allows you to immerse yourself with Eternal Black's dark world. The fuzz sounds are a welcome addition as Eternal Black start to have fun with their music.

Can I use the term "fun" with an album such as this?

Yeah, why not. As the album still retains its Doom Metal credentials with creepy song titles, lyrics, vocals and riffs all showcasing what a damn fine album this is. Songs such as Sea Of Grave, Strained Eyes On A Setting Sun and the epic eleven minute opus - All Gods Fail - is perhaps where Eternal Black impresses the most.

This is an album that takes influence from the legendary doom metal bands of the last forty years but Eternal Black add an exciting modern feel to their overall sound. Eternal Black manages to show off their progressive side on songs such as Sea Of Graves and All Gods Fail. The production is first rate with the album showcasing how technically impressive the band actually are. The overall sound of the album is immense from the start with the different elements of music being played at a loud rate.

Bleed The Days is a perfect example in how to create and release a vintage sounding Doom Metal album. It's an exciting and action packed debut album that could see Eternal Black play their music on the more established Doom/Stoner Metal festivals and stages across the globe.