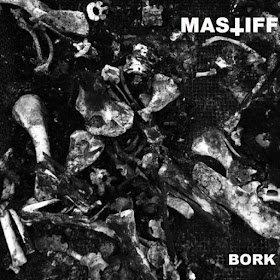 You expect something heavy and brutal from a band with a name like Mastiff. As the band merge Doom/Sludge Metal sounds that is built upon a frenzied hardcore and pissed off rage. I missed the band's debut album Wrank which was released in 2016. Their new EP – BORK – and their first for upcoming UK Hard Rock/Metal label – APF Records – is a quite a pummelling experience that showcases the bands angry and ferocious nature to superb effect.

Opening track – Agony – starts with a fast-paced hardcore riff with Mastiff playing quite a complex sound with elements of Sludge/Doom based moments appearing at different parts of the song. The growls from lead vocalist from Jim range from clean based to the more harsher death based growls. I don't have a clue what he's signing about but he's very good at what he does.

Second track – Nil By Mouth – is an even more angrier song with the band moving further into the Sludge Metal world with the drumming adding a confident hardcore sound. The vocals have an even more depressing feel as Mastiff aren't afraid of creating a depressing atmosphere that takes no prisoners. Mastiff do provide moments of sludgy grooves on this track that shows they can slow the mood right down and play a more restrained style of hard rock/metal.

Third track – Everything Equals Death – is perhaps the most scariest, angriest, heaviest and filthiest song on the EP. It's an exercise in pure doom/death/sludge metal destruction. There's nothing complex about this song. This is Mastiff showing the world how rightly pissed off they are. Harsh vocals and down-tempo riffs reign supreme.

The other songs on the EP – Threats, Tumour and Eternal Regret – carry on the torturous and sinister message that Mastiff expertly create. The music does have a stop-start approach on some of the songs but it's the sheer technical ability that Mastiff possess that will impress you the most.

The production is fragile and very raw but that's the point of BORK. As Mastiff don't want to be that super and over-produced metal band. They want to be a rough and ready sludge metal powerhouse where the music counts for itself. They succeed on that level alone with pure talent and hard-hitting conviction.

Mastiff leave you brutally demoralised and shaking in the corner wondering what the FUCK did you just listen to. BORK is simply an outstanding slice of UK Sludge/Doom Metal brutality.

Words by Steve Howe
Thanks to APF Records for the promo. BORK will be released on CD/DD via APFRecords from August 31st 2017.
Links: