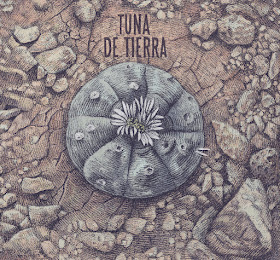 The debut s/t album from Italian Desert/Stoner Rockers – Tuna de Tierra – lives and breathes the legendary Californian Desert Rock scene. Taking influence from the usual assortment of bands and artists from that scene. Tuna de Tierra are not breaking any new ground but their debut album is still a highly promising and hugely entertaining album. With the band playing a more epic style of desert/stoner rock jams and especially from the Kyuss school of sound.

The vocals from Alessio may sound jarring for some and may take a few moments to get used to his style of vocals. He's a great singer and offers a different style of vocals within the Desert/Stoner Rock world.

The opening track – Slow Burn – is an instrumental track that sets up the scene with psychedelic desert rock sounds being the main order of business. It's quite heavy in parts and even manages to bring some atmospheric post-rock vibes to the mix.

Second track – Morning Demon – is an almost dreamlike song with the band adding a more progressive style of music. The music drifts from heavy stoner sounds to the more laid-back psychedelic desert riffs that appear on different parts of the song.

Third track – Out Of Time – is a 10 minute plus song that starts rather slowly with an almost blues rock sound. The band carry on with this style of music for the first few moments. Until the band start adding familiar sounding desert/stoner sounds. The song finally becomes heavier around the 4th minute and it breathes new life into this song. This is one of the best songs on the album as Tuna de Tierra finally begin to feel comfortable with their own sound and the world around them.

Fourth track – Long Sabbath's Day – is the weakest song on this album. As It brings nothing to the album. It kills the mood of the entire album with it's slowly played blues sound.

Tuna de Tierra turn things around and return to winning ways with the final 3 songs on the album - Raise Of The Lights, Mountain and Laguna. The band play their way through a different assortment of genres and sounds that play's to the bands strengths as musicians. The sound is more Blues Rock based compared to the earlier parts of the album. Though the band never forget their Desert/Stoner Rock roots as Mountain and Laguna sees the band return to that world. It allows the album to end on an exciting finish.

Overall, Tuna de Tierra's debut album is a well produced affair and one that's worth checking out. If you want a more Blues Rock driven Desert/Stoner Rock album, then Tuna de Tierra maybe the band for you.

Words by Steve Howe
You can listen to the excellent new song – Laguna – from the album which Argonauta Records are kindly letting ourselves premiere.


Thanks to Argonauta Records and NeeCee Agency for the promo and song premiere.

Tuna de Tierra S/T album will be available to buy on CD/DD via Argonauta Records from September 22nd 2017.
Links: