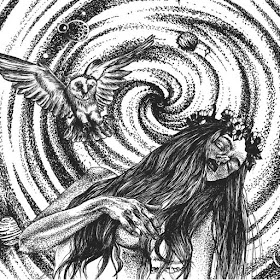 UK Sludge Metallers - Tuskar - have been gathering some major buzz recently before the release of their debut EP. Is the hype justified. You bet. Especially after listening to their debut EP - Arianrhod. So what can you expect. Heavy Sludge Riffs that bring back memories of Mastodon and The Melvins in places.

Opening track - Fateweaver - takes it time with Tuskar playing a heavy distorted and almost droned out riff before exploding into a doom based thunderous noise. Tuskar have elements of Ufomammut psychedelic doom appearing throughout the song. Vocals from Tyler are firmly rooted in the Sludge Rock arena. The vocals are mostly clean but sang in an angry fashion with hardcore style growls appearing towards the end. Fateweaver has a slight DIY approach but it still sounds remarkably clear and fresh.

Second track - Where Strides The Colossus - is a huge sounding song with Tuskar proving their worth by creating one of the EP's best songs. The fast-paced drumming adds real volume and weight to the band's overall sound. The mixture of the stop-start rhythms played against the Sludge/Stoner Metal backdrop sees the band playing their own sound. This is music to violently lose yourself in. Arianrhod is violent and it makes no apologies for that. Though Tuskar still bring moments of melodic Sludge/Stoner Rock at different parts of the EP.

Third track - Toegrinder - has a very cool sounding progressive sludge/stoner rock melody that will no doubt appeal to fans of Torche in places. The mood becomes very psychedelic in parts and it's good to see another side to Tuskar's angry personality. The music is calmly played with measured assurance.

The final two tracks - Moon Hooch and Crimson Skull - lay on the Mastodon-esque atmosphere with aplomb. As the riffs become heavier and dirtier in places. The progressive sounds adds a heavy touch of class with the distorted DIY approach to Tuskar's music makes them standout from the crowd. The vocals veer into more dreamlike and psychedelic territory especially Moon Hooch before the sludge/doom growls fully take over. Tuskar's debut EP is a winning combination of many different heavy Sludge, Doom and Stoner based sounds. Though it mainly shows that Tuskar are perhaps destined for bigger and greater things in the years to come.

The last time I was genuinely excited for a UK Doom/Sludge Metal band was the mighty OHHMS. Look how far those guys have progressed over the last few years or so. Tuskar have similar qualities to OHHMS as they strive to create music on their own terms and what is meant to be heard by the biggest audience possible. Tuskar are going places. Watch these guys soar!!!

Thanks to Richard at Sheltered Life PR for the promo. Arianrhod is available to buy on CD/DD via Riff Rock Records now.