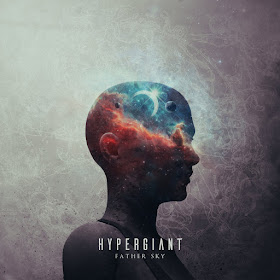 Australia's Hypergiant have unveiled an incredible debut album. To be honest, I knew nothing about the band before diving in to this record, but have walked away impressed and a huge fan of this expansive, adventurous record. Father Sky is 11 massive tracks that clock in at over an hour of killer music. Hypergiant are a difficult band to pigeon-hole. To break it down in their purest, simplest form, they are a metal band, but the album careens wildly between all of the sub genres in a most satisfying way. There are times I hear the likes of Mastodon, Khemmis, and Spirit Adrift in Hypergiant's sound, but it is that and more. The sound of Father Sky is top notch and the band is tight and confident, and it shows. Their sound is no frills, meaning it is guitar, bass, drums, and vocals, but at the same time so much more.

The record opens solidly with Perseus Arm a five plus minute slab of solid stoner rock. Colossi has a more straight forward metal sound with a true focus on the absolutely killer drumming that has the song ending with a serious neck breaking thrash outro. Next the band drops some huge fuzzed out riffage on Island 3, which is a blazing 7 minutes of awesomeness.

Retrograde has an almost Gothic sound that is heavy on the instrumentation and vibe. The band then kicks up the aggression with Entropy. The vocals are rough and the song has a sound reminiscent of -16- heavy sound.

Interlude:Krakenmare is an instrumental track that starts with an acoustic intro before taking an about face to a heavy end.

Ryu-Un Maru has a spaced out/celestial sound that lets your mind rest before returning to the aggressive sludgy sound of No Way Out with aggressive vocals and a killer double kick drum sound. PSR J0835-4510 is a brief little dark, noisy interlude.

Solar Landslide is a focused straight metal sounding track that carries an ethereal feel before closing out with a dark and oppressive feel. The album closes out with a big rock sounding closer of Apogee with it's heavy bass intro is the perfect close to this wild and heavy ride.

If you are not familiar with Hypergiant you should definitely take the time to acquaint yourself with them. I myself am onboard for the ride that these guys are taking. Father Sky is an amazing metal journey. Check it out!


Thanks to Hypergiant for the promo. Father Sky will be available to buy on CD/DD from November 16th 2017.