An Interview With Jake Wallace: Discussing PLAIN LIVING PROMOTIONS and CRYPT OF THE RIFF Musical Festival

Plain Living Promotions have just announced their first ever One Day Music Festival called – CRYPT OF THE RIFF – which we will discuss in great detail in the interview below.

CRYPT OF THE RIFF will be held in Belfast on Friday May 18th 2018. You can see from the poster below that the festival has a great line-up. 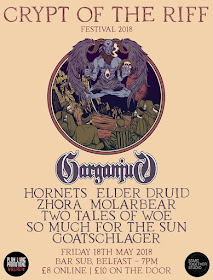 So let's see how Jake got this crazy idea to run a promotions company and to put on a one day music festival.

Hi Jake. How are things with you today.

Things are great Steve. Christmas is in a few days and I'm patiently waiting on a new Flying V landing on my doorstep!

Basically, the company is myself and Tyrell Black from Electric Octopus. We're both from the same town, not far from Belfast, and we were both doing our own things in regards to Elder Druid and Electric Octopus. We're both big fans of stoner rock, doom, psych, all the good stuff and we thought there wasn't really a specific promoter in Belfast who'd solely deal with these genres.

Was it an easy decision to make to form a promotions company.

It was actually. If we have an idea or a mad plan, it just gets set in motion without too much thought and that’s pretty much what happened here. Thoughts become things.

Did you receive any helpful tips and advice from your pals who do this kind of work already. What advice did they provide you.

Yeah, we have a lot of friends in bands who've been in touch wanting to get involved in a Plain Living Promotions show and I just think it takes something like what we're doing to bring all these killer bands to the surface and show the world what Belfast has in its arsenal. A few stoner rock/doom websites have been sharing our name around as well so its cool to see support from all over the place.

What are the aims and objectives for the promotions company.

The main plan at the minute is to carry out our one-day festival in May 2018. Most of our efforts are going towards making that a successful event and hopefully running them more frequently in the future. Aside from that, we intend to organise shows for local stoner/doom/psych bands and build a sense of community. We also intend to use it as a means of bringing some bigger bands over and giving local bands support slots that they wouldn't normally get in Belfast.

You have plans to put on a new one-day festival called Crypt Of The Riff. Can you give more details when and where it's being held. And who is appearing on the bill.

Crypt of the Riff is going to be a one-day festival on Friday 18th May in Bar Sub in Belfast. Bar Sub is part of the university students union and is an awesome underground bar. We've been planning something like this for a while but we just needed to get a date far enough in advance to make sure everything goes to plan.

The lineup is: Garganjua, Hornets, Elder Druid, zhOra, Molarbear, Two Tales of Woe, So Much For The Sun and Goatschlager.

How did you decide on which bands to appear on the bill. You have a killer line-up so far.

The bands on the bill are all just some of our favourite bands from Northern Ireland. It’s a really good mix of styles but everyone stays true to the heavy riff. We've a great mixing pot of doom, stoner, sludge and hardcore on the bill.

How hard has it been arranging this festival.

It hasn't been too bad. We know all the guys in the bands well and it was a matter of sending out a few messages and securing a date/venue. Keeping it to one day is probably wise for our first fest and we'll know for future after this one is wrapped up.

Will you be promoting anymore gigs before the festival. Or are you seeing how this one goes first.

This will be our first proper event but we have some things lined up for later in 2018. 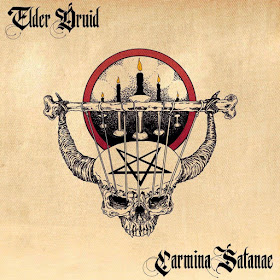 We have to talk to you about Elder Druid and the fantastic album you released earlier this year. Carmina Satanae. (Apologies I haven't reviewed this yet. I will be very soon). That album received some great reviews. Were you happy with the initial response the album has received so far.

Thanks very much man. Yeah, we got a great a response to the album. The first couple live EPs and our debut EP kind of set the scene for people getting into the band so I think Carmina Satanae really packed a punch as the progression is fairly evident.

What was recording the album like. As this album has a heavier and angrier feel compared to your debut EP – Magicka.

We recorded the album with Niall Doran from Start Together Studios in Belfast. He's an absolute dream to work with and, as a huge fan of doom, he knew exactly what we needed or didn't need. It was a fairly fluid process from start to finish. We recorded live this time and it doesn't really need justified. Click tracks just don't work for our style of playing and the live atmosphere really gels everything together much better.

Was that the intention to release something different to your debut EP.

I wouldn't say it was too different. It was just a progression of what we were working on and a more refined product compared to the earlier stuff. Tone is a very big thing and that goes without saying so that was an important factor as we wanted this to sound as huge as possible.

How are things within the Elder Druid camp. Are you guys making plans for more gigs and tours in 2018. Anything you like to share with our readers.

We’re all alive and kicking man. We've got a couple English shows planned for March when we play Manchester on the 16th and Camden on the 17th. We're playing with Ten Ton Slug, Mage and Master Charger in Manchester then it’s the St Patrick's Day Irish Invasion in Camden on the 17th with Ten Ton Slug, Chubby Thunderous Bad Kush Masters and Mount Soma. We've got some plans for an Irish tour as well in September 2018 with a certain band of fuzzmen.

What have been your high points and low points with the band.

High points for the band would be getting to travel and play gigs in southern Ireland and England in 2017. That’s essentially the best part of it. Getting to take music you wrote in your bedroom to another country and play in front of total strangers is a very fulfilling thing. Siege of Limerick and Emerald Haze were both awesome festivals this year too. The lowest point for me personally was being unable to play our gig in Camden on the last day of our tour after cutting up my hand but the body heals and I'll be back in March.

Are you all involved with different musical projects or is this your main band.

Dale is the only one of us who is in a proper full-time band outside of Elder Druid. He plays bass in Electric Octopus with Tyrell. We're all very good mates and jam together now and again. We've dreamed up about 200 side projects that haven't yet come to fruition but I'll not speak too soon.

How hard is it for Elder Druid stand-out from the crowd. Or do you not worry about things like that.

One of the main things people talk about is the style of vocals. Gregg's aggressive style vocals might seem a little different given our style of music but I think it works really great. There's such a huge amount of energy on stage and it feels empowering to get these types of songs out of you. At the same time, we aren't worried about standing out. If we get to play heavy riffs and see parts of the world we wouldn't normally see, why would you care about standing out?

Thanks for doing this. All the best with your promotions company, the festival and with the band as well.

Thanks to Jake for doing this interview.

Crypt Of The Riff Links: