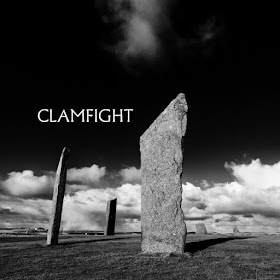 Greetings all,
I had the most righteous honor of checking out the new album by Philadelphia riff masters Clamfight. III is obviously the bands third release and it is an amazing set of 5 slabs of killer sludge. The band credits alot of the hallmarks of the stoner metal as their influences, and while you can certainly here those influences the fellas in Clamfight do an amazing job of sounding original and masterful. There are elements from the 70's to today and the band finds a way to wink and nod at 40+ years of killer music in only 5 crushing tracks.
To the tracks, the album opens with Whale Road which spans over 11 minutes and kicks of with a surf inspired intro that instantly reminded me of that used in Pulp Fiction. The song varies into a lot of directions as their is a bit of Neurosis when the song kicks in before going in to a Clutch inspired guitar breakdown before some heavy, heavy drums in the outro. Selkie comes in next and it hits you hard and fast. The song is heavy, period. Echoes in Stone is an impressive multi faceted song. There is some Eyehategod level sludge mixed with female vocals and an absolutely face melting guitar solo outro. Eynhallow is the shortest track on the record at a little over 5 minutes. It is a slow instrumental interpretations that opens with a subdued bass line before bringing in some David Gilmour/Pink Floyd inspired guitar work with a nice mix of synths to keep the mood mellow. The album closes with the impressive 12+ minutes of History of Earls of Orkney that comes in with a leisurely 3 minute start before kicking in with an amazing riff that will leave your neck a bit on the sore side. There are so many aspects of this song that are utterly amazing.
Clamfight has bestowed upon us an amazing piece of work. I implore anyone reading this to take the time and track this record down. The band is set to start 2018 with more than just a bang. Do yourself a favor and track down III. I know I am.
-Todd S

Thanks to Barbara at NeeCee Agency for the promo. III will be available to buy on CD/DD via Argonauta Records from Jan 19th 2018.