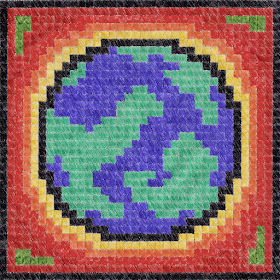 Glanville rhythm guitar player Chris West announces Giganto Records, a new record label to serve as a platform for various and varied music projects written and recorded by himself. Releases will be less on the traditional side of 45 minute albums and will instead focus on letting each piece be what it needs to be. Whether it's one minute songs or twenty minute jams the music will be in pursuit, as always, of heavy. Whatever that may be.

Straight out of the gate from Giganto Records comes the particularly short and intense Reality’s Flux, an EP under the name Scuzzball. Featuring Mithun Shah (Sedulus) on drums, Jill Mikkelson (Dysteria) on vocals and West on guitar and bass, Reality's Flux consists of four small slices of sludge that waste no time in making their brief and fierce point. Mikkelson’s lyrical themes cover plate tectonics, the physics of consciousness and theories of the origins of life on Earth which provided the inspiration for West to draw an animation for the song Rudimentary Beasts.

Chris West commented on the making of the animation:

"As soon as I read the lyrics I knew I had to make a video. The style of the animation was inspired by my lack of ability to draw freehand and memories of my brother sketching out sprites on graph paper before programming them on our ZX Spectrum. I thought of it as a super low resolution screen and spent 3 months over the summer colouring in squares on graph paper with ballpoint pens. As laborious (and cramp-inducing) as it was at times, especially re-drawing the first third after realising I'd rushed it, I enjoyed the process and it became like a daily meditation. Hopefully the animation does justice to Jill's lyrics."

The animation for Rudimentary Beasts can be seen here: