Funeral Horse started its way in 2013, when a trio of friends took a decision to play some driving, heavy and low stuff. The first EP ‘Savage Audio Demons’ drawn the attention of Artificial Head Records who released next EP ‘Sinister Rites Of The Master’ (2014) and LP Divinity For The Wicked (2015).

The Power trio returns with new album ‘Psalms Of The Mourning’, the label describes new material as punk doom and it sounds damn good. What’s the hell is “punk doom”?

It seems we need the whole Funeral Horse crew here to sort it out, so let me introduce you Paul Bearer (guitars, vocals), Chris Bassett (drums) and Clint Rater (bass). Bring it on dudes!

Hi dudes! How are you? What's going on in Funeral Horse's bay?

Paul Bearer: Hey Aleks! Dude, we’re recovering from our most recent tour and catching up on things here at home. I have Chris and Clint here with me to join our conversation today too.

The band performs proper and tight stoner music, yet I've seen that you're also tagged as "punk doom". How do you see that?

Chris Bassett: While the first album can certainly be classified as Stoner, I’d say the past two records have deviated from that style quite a bit. Not sure if the Stoner Punk label fits either. If anyone feels the need to attach a Stoner tag to us, I suppose "Stoner Prog" might suffice. We, however, are quite content with the term ROCK.

Clint Rater: I feel the “Stoner” feel is gone now. I tune my bass to E standard and there isn’t any crazy fuzzed-out, overdriven wall of repetitive noise. We are much more inspired by 70’s rock, prog, jazz , and blues. In all honesty, I think it’s safe to say that we are not only tired of the “stoner/doom/sludge” label, but we’ve outgrown it as a band and in our personal tastes.

By the way, how do you see social roots of stoner? How did you reveal this spirit in you?


Paul Bearer: Modern “stoner metal” can be traced back to the early 90s with albums by Sleep, Kyuss and The Melvins. I loved the way it directly clashed with the speed and fury of punk and metal at the time. Before that, you have obvious references such as early Sabbath or even Goblin with their experimental style of rock and ambiance. The spirit of stoner metal, to me, has always been rooted in American blues music… and that’s where Funeral Horse ultimately draws its influence.

There are many stoner bands in US and Old World as well, but don't you think that exclusively stoner is American phenomenon originally?

Paul Bearer: I find the phenomena deeply rooted in British blues and rock and it just evolved with each new band until it ultimately was born out of the California metal scene.

Funeral Horse - Emperor Of All Maladies

You don’t sound (and you don’t look) as some newbies, do you have some musical background besides Funeral Horse?

Clint: Yeah. I play drums and write in another Artificial Head Records band called Jody Seabody and the Whirls.

Chris: I've been playing in bands for quite a number of years. A few different genres. Currently I play in a few "tribute" bands on the side (Pink Floyd, The Police) but Funeral Horse is my primary musical focus.

Paul: Back in the 90s, I was in a noise rock band called Tranquil. We released an album and did some touring in the northeast USA. I took a break after that and got back into music once I moved to Houston… which was about 12 years ago. Played in a few metal, punk and post-punk bands before finally starting Funeral Horse. 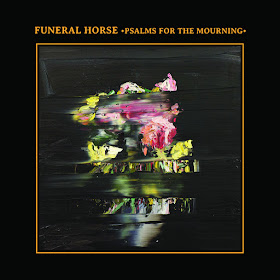 The third full-length album ‘Psalms For The Mourning’ was released just three weeks ago. What were your primal goals when you enter a studio? What was your master plan for a new album?

Paul: We knew that we needed to make a statement with this album as there was a lot going on in our personal lives, especially mine. I was going through a divorce, I lost two close friends to cancer, and I became this self-destructive mess. Funeral Horse was my only positive outlet, and even then – our gigs were rife with fucked up performances, antagonistic behavior towards the audience and I struggled with severe depression while touring. All of that had to come out. All of that had to be given a voice. So the master plan was to create a set of songs that would exercise these demons and give me a way to explain (at the very least to myself) what had happened.

Three years passed since the release of debut full-length ‘Divinity For The Wicked’. How do you value your progress on Psalms?

Paul: It’s a significant step forward in terms of song writing and our playing. We took our time on the production side to make sure the album had the feel and sound we wanted.

What are main features of Funeral Horse from your point of view? Through which equipment did you fulfill it working in the studio?

Paul: We mainly used whatever equipment would get the job done. Most the heavier songs on the album were recorded using a beat-up Japanese Esquire, a basic Fuzzface pedal and a tiny Fender Champ. Other times, I’m using a Les Paul into an old Mesa Boogie and sometimes I used a big old Gretsch hollowbody into a Marshall 18 watt. I got fancy on the song Divinity for the Wicked as I used a double neck (12/6) into Vox AC15 and a tube tape echo machine. Chris used Sabian cymbals and his Tama kit but sometimes he used the studio’s old Gretsch kit.

I gotta tell you though, Clint and I are not into pedals as we like to keep things simple – especially on stage. 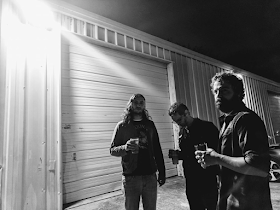 How serious were you in the studio? How much of improvisation was during the record session?

Clint: Personally, I was very focused on having a 50-50 blend of “clinical focus” and “loosey-goosey”.

Chris: For myself, I do very little improv when recording. I work out a part and really don't deviate much while recording. I enjoy the discipline of the studio. It's during the live setting that I like to loosen it up and perhaps add some more color.

Paul: Dude, I was serious as fuck. Sometimes I would walk out of the studio out of frustration and anger at myself for not getting a part done right. It was intense at times.

There’s ‘Evel Knieval Blues’ song on the album, it contains nice country tune, how did you come to an idea? And did your paths ever crossed with Moonbow? With what kind of bands do you usually share a stage?

Paul: With Evel Knievel Blues – I had been toying around with the idea of incorporating different styles into our song catalogue. We have several songs in our catalogue that stray from the traditional metal style because… well… that’s what we like to listen to. Cities of the Red Night, I Hear The Devil Calling Me, and A Bit of Weed are excellent examples of us playing around with different musical styles.

We have played a show with Moonbow when they came to Houston. Oh man… that was sooo long ago too. We usually get coupled with metal bands when we’re on the road or even at home. We prefer to play shows with bands that are quite different from us though as we like that kind of variety.


Funeral Horse – There Shall Be Vultures


Funeral Horse is a trio, that seems to be a comfortable format for touring, when do you plan to hit the road and start to preach ‘Psalms’?

Paul: Dude, we’re always hitting the road… that’s why it’s taken us so long to answer your interview questions!!!

Does being in the band grant you some therapeutic effect or something? What are positive and negative sides of being in Funeral Horse?

Clint: Absolutely. Music whether you are performing or simply listening is indeed therapeutic. After a performance there is a definite sense of satisfaction knowing you gave it your all and being able to play music you thoroughly enjoy alongside talented like-minded musicians. If there IS a negative it's trying to fall asleep later on with ringing ears.