An Interview With John Rau and Dustin Mendel from CONJURER (US)

This interview is about the US Doom/Sludge/Stoner Metal Band – CONJURER and not the UK Doom/Sludge Metal band of the same name.

Conjurer first came to my attention back in July 2015 when they sent me their blistering debut album – Old World Ritual – to review. Old World Ritual was the very first album review published on the blog.

Looking back at Old World Ritual, I was impressed of the band’s style of Doom, Sludge and Stoner Metal that took influence from Mastodon and High On Fire but with Conjurer offering their own style of heavy based sounds.

Fast Forward 3 years later and CONJURER will be returning later this year in December 2018 when they will be releasing their 2nd album – Sigils. I’ve heard Sigils and it’s a leaner, heavier and moodier album than it’s predecessor. I will be reviewing the album in November 2018. Nearer the albums official release date.

Until then you can read this interview that I did with John Rau and Dustin Mendel from CONJURER where we discuss the making of the new album and what you can expect from the album.

Hi guys. Thanks for doing this interview. How are things with you today. Congratulations on your new album.

JR: Thanks for having us, Steve. We’re doing great, excited to share this record.

Can you give a brief history of how the band formed and where it is today.

JR: We formed the tail end of 2010, after a couple line-up changes initially, we released our first s/t EP in 2012, a full length “Old World Ritual” in 2015, and a split 7” on Small Hand Factory, in 2016. Since then we have been writing and recording our new full length “Sigils”.

You’re probably aware there is another Doom/Sludge Metal band from the UK called Conjurer as well. Has this caused any issues having the same name as that band. Have you checked that “Conjurer” out. Or do you just focus on your own thing.


DM: We’ve had a couple things get tagged incorrectly online. It has been a little comical, but for the most part people get which band is which.

How would you describe the music that Conjurer creates on your new album - Sigils. As there are many different elements and levels to your overall sound compared to your debut album.

JR: Stylistically “Sigils”, was the next step. It is definitely heavier and it has more doom influence than our first record, but that change wasn’t something we set out to do. It just organically evolved as we wrote. 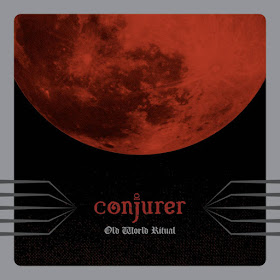 Was that the plan to release something different compared to your debut album.

DM: We definitely wanted to capture more of the heaviness that we had live. Playing songs live always shows you what works and what doesn’t, when we recorded “Old World Ritual” we were still figuring that out. I feel like this record is a much more cohesive album and much heavier.

Sigils has quite a dark and gloomy narrative running throughout the album. Was recording the album a hard experience or was it just something you wanted to release on Sigils.

JR: When we started writing we had a rough idea of the narrative, and Dustin had an overarching concept for the album.

What is the main concept of the album.

DM: Lyrically, the album deals with issues that may arise when a person tries to fulfil their desires by using metaphysical things like chaos magick, astral projection et al. And gets bit in the ass by doing things wrong or trying to rush.

JR: It feels great to say, yes! “Sigils” is going to being coming out on Doom Stew Records, out of San Francisco, in December. We are stoked to join an awesome group of bands that are crushing as hell. It will be coming out on CD/LP/Digital.

Will you be performing any more gigs to promote the upcoming new album.

JR: Yeah, living in Indy we can get to a lot of cities pretty quick, so we are planning to cover a lot of ground in 2018/19. We’re also hoping to play some fests. 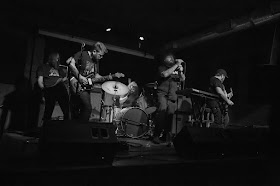 JR: Indy has a great metal scene there are so many great bands like: Shroud of Vulture, Obscene, Archarus, Photian Schism, Drude, Pot Slammer, Steed, and Battersea. I’m sure I forgot a bunch too. We feel very fortunate to be part in the scene here in Indianapolis.

You have a lot of different styles on this album. Doom, Sludge, Post-Metal and Stoner Rock. How would you class your own music as. 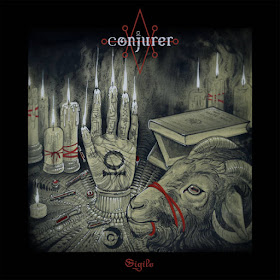 The album artwork is quite striking and fits the overall mood of the album. Who designed the artwork and how much input did you have into the final design.

JR: A good friend of ours, Dusty Neal from Black Anvil Tattoo, painted it for us, and it turned out fucking amazing. He’s one of the best tattoo artists I’ve ever seen, and I am so awe struck with what he came up with from our very basic concept.

When you’re creating new music. What comes first. The music or the lyrics.

JR: With us, it’s always music first. While the song is being written, Dustin figures out how he wants to phrase things, and then writes lyrics. For “Sigils” we talked about Dustin’s lyrical concept and recorded demos of each song as we went, so that Dustin could write and plot the story.

What is the songwriting dynamic within the band. Is it a group collective or down to one individual.

DM: Our songs usually start with one of the guys bringing a riff or two, and then we finish writing the rest and do the arrangement as a group.

What is your current equipment/setup when recording music and playing live.

JR: I play a Jazzmaster into an Ampeg V2 and a Sovtek Mig 50h. Brian plays a Peavey T60 into a Sunn Beta Lead. Gabe plays a Sterling into a Sunn Concert Bass. Dillon plays some giant Ludwig drums, and Dustin shouts at everyone while playing an Ensoniq ESQ-1 organ.

We pretty much used our normal rigs to record “Sigils”, plus a few extra things. We used an old Traynor TS-10, a Marshall 2555 head, an Orange Tiny Terror, an EGC Standard, and a Korg SV-1 organ.

Thanks for doing this interview. Before you go do you have any words of wisdom to say to your fans.

DM: Crush your enemies, see them driven before you, and hear the lamentation of their weak riffs.

Words by Steve Howe and CONJURER