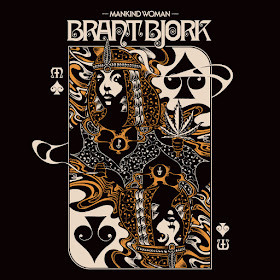 There is no denying the pedigree and boundless talent that is Brant Bjork. When your resume notes Kyuss and Fu Manchu amongst the countless other projects there is no room for debate that the man is dedicated and extremely talented. Mankind Woman is Brant’s 13th album and it is an absolute winner. The eleven retro sounding, politically charged tracks recorded and performed with his bandmate Bubba Dupree, along with some other guests including his old Kyuss mate Nick Oliveri, are a rallying point and a breath of fresh air in these tumultuous times.

The record was recorded at various points in California and there is a definite Cali Stoner vibe, but what is most endearing is the killer retro-sound that the record has. It sounds as if it was recorded in the late 60’s/early 70’s and has a funky soulful sound mixed with the fuzzed out rock and politically fuelled subject matter of those times, which are becoming more and more applicable to these times as well.

To the songs; The album opens with the fuzzed out rock and cool drum sounds of Chocolatize as Brant tries to bring back a “Funky Revolution.” The next two tracks reminded me of equal parts Cream and Eric Burdon/War. Lazy Wizards has a laid back 60’s psych feel that carries through to the driving drums and killer guitar lick of Pisces. The latter repeatedly echoing the sentiment of being “Sick and tired of being sick and tired.” The driving, somewhat country-esque groove of Charlie Gin which features some sweet background vocals.

The title track, Mankind Woman, is an amazing bluesy track that comes in two parts. The track opens with a slower, bluesy feel then takes a dynamic shift to a rocking rage filled close with fuzzed out solo’s and a 60’s heavy outro. Psychedelic guitars open and close the ultra groovy Swagger & Sway. Somebody follows and brings a funk inspired heaviness with its use of wah pedals and deeper, darker subject matter. The outrage continues with trippy, echo heavy vocals that give Pretty Hairy a unique, psych feel. Brand New Old Times is a short slice of rock that sounds like it came straight from Haight/Ashbury with its groovy, pop feel.

1968 is a fuzzed out slab of furious protest to all the issues with the current state of affairs. The album closes with the big drums and heavy fuzz of Nation of Indica, This powerful, politically charged statement is a plea for peace and love and calls out everything wrong with the current US political culture.

With Mankind Woman, Brant Bjork has shown that the most effective protest songs don’t have to be loud and in your face. I honestly don’t know if we will a more heartfelt, angry, and sincere of a record as this any time soon. Mankind Woman is not unlucky 13 for Brant Bjork, but it is an amazing turn and a tremendous accomplishment of a record that deserves to be heard by all. Dig on these soulful, fuzzed out grooves!

Thanks to Claire at Purple Sage PR and Mona at All Noir PR for the promo.

Mankind Woman will be available to buy on CD/DD/Vinyl via Heavy Psych Sounds from September 14th 2018.