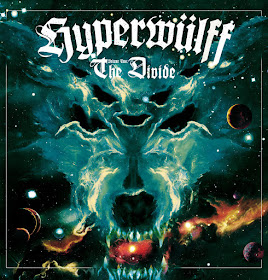 I’m not very good reviewing concept albums. I always want to focus on the music. So I will post what Hyperwülff’s new album is about and continue with my review.

“Volume Two: The Divide, begins on the battlefield where the last fight against Robogoat is taking place, and instantly throws us in a kaleidoscope of words and memories recounted by the two protagonists, describing the last moments of struggle between the Great Wolf and the Mechanical Beast, which ends with the annihilation of both.

Hyperwülff, now devoid of a physical body, is forced to roam the cosmos in a different state of matter, and can only interact through the body of The Wülff. The Erionite forces, now in shambles, need to gather their last strength to save the Stele of Laar, infinite source of energy, and symbol of the ancient pact between the planet’s living beings, upon which they swore an oath of fraternity and loyalty.

The Stele is the last chance for the Hyper Wolf to regain a physical body, before being swept away forever in the dark of the Universe.“

Italian Heavy Sludge Doomed Out Rockers Hyperwülff returns with their cosmic new album - Volume II - The Divide. This album has a more expansive and heavier sound than their debut album. The album still has the Mastodon/SLEEP style sonic riffage but with a heavier and progressive edge.

Opening track - Erion Chant - is an almost surreal Doom/Sludge Metal song with elements of Psychedelic Drone sounds allowing Hyperwülff to become a more cosmic and spaced version of OM or Zoroaster. The vocals are very cool, as they have an almost drone based feel.

Hyperwülff wisely decide to change things around on the second song - Hypersphere. This has a heavier Doom Metal feel and even has traces of Thrash Metal running throughout. It's a different contrast and vibe to the opening track but this shows the band is more than happy to change the whole flow of the album when the time calls for it. The instrumental work is purely a Doom/Sludge Metal affair though you can expect to hear Stoner Rock/Metal riffs along the way.

Third track - Recall! Recall! - sees lead vocalist The Sarge deliver the hardcore growls he superbly performs. The music loses some of its momentum as Hyperwülff struggle deciding which type of music should be the main focus. The familiar Mastodon-eqsue sounds have a more DIY Punk Rock edge and I admire the band for trying something different.

Fourth song - Ghost Wolf - sees the band return to winning ways with a Psychedelic Sludge/Stoner Rock number that easily ranks as one of the albums standout tracks. The band adapts a more cosmic approach to their lyrics whilst still offering a bleak sensibility that leaves you wanting more. The song does become very chaotic and messy towards the end but that's part of the fun with the song.

Fifth song - Last Ride - has a sludgy QOTSA feel to it with Hyperwülff embracing a less threatening approach and it's another cool side to hear from the band. The lo-fi production serves the band well as it's the fast-paced Punk Rock sounds that make this another standout track on the album.

Hyperwülff even start adding elements of Post-Metal into their music that leaves quite an unsettling feeling. The overall production of Volume II - The Divide - is handled superbly well. There are a few moments where the sound can be too raw at times but I think this is intentional. As Hyperwülff want to take you out of your comfort zone and they ultimately succeed.

This is a very challenging album to listen to and Hyperwülff deserve credit for releasing a great album such as this.

Thanks to Hyperwülff for the promo.

The album will be released on September 14th 2018 through Shove, Deathcrush and Dischi Bervisti. It will be available in a vinyl+CD edition of 300, 100 of which printed in milk-white vinyl. Of these, 25 will be in ultra-limited edition curated by Teschio Dischi. Tape version will be released by Roughness Noise.