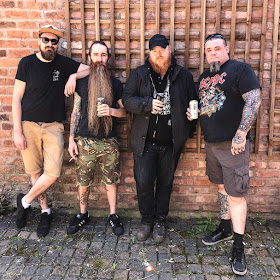 BATTALIONS, belligerent champions of the UK DIY underground scene, revered by fans worldwide, lauded by the press and hairier than a bucket of black bears have announced their third album Forever Marching Backwards will be released via APF Records on November 30th 2018.

The band have also released their first video and single 'Forever Marching Backwards' from the album, check it out here:

Recorded and mixed by Chris Fielding at Skyhammer Studios in the UK, the resulting album is a danger-fuelled 30 minutes of Battalions own brand of bleak, swaggering, riff-infused groove metal-meets-harsh-punk sound. To quote the band, this is ‘pure Humber sludge’.

Comments vocalist Phil Wilkinson: “If you’ve followed Battalions for the last few albums you can expect tighter production, bigger riffs, more of a focus on structure and song writing along with the usual self-depreciating humour peppered throughout. The album itself is based around lead single 'Forever Marching Backwards' from which the album takes its name, essentially an allegory about how society seems to be hardwired to follow blindly without the majority questioning motives. The blind leading the blind."

Forever Marching Backwards is the follow up album to the band's 2017 release Moonburn and brings to the table a tighter, punchier, dirtier sound with bigger riffs and extra swagger.

BATTALIONS was formed in early 2010 in the coastal city of Hull, UK. Their fanbase and support has steadily grown through incendiary live shows throughout the UK including high-profile support slots with Conan, Church Of Misery, Sworn Enemy, Ohhms, Slabdragger, Samothrace, Dopethrone and Vinnum Sabbathi. In 2017 they played on the Hobgoblin Stage at Bloodstock Open Air Festival, and headlined the Motorhead Roadcrew Stage at the 30,000-capacity Humber Street Sesh.

The band’s first two albums, 2016’s Nothing To Lose and 2017’s Moonburn received universal critical praise. Since the writing of the latter the band has slimmed down from a quintet to a 4-piece and now in 2018 the band have recently signed to APF Records and will release Forever Marching Backwards in November.

Forever Marching Backwards will be released by APF Records on November 30th. Pre-orders are available here.

Find out more about the band