Dividing Fact From Fiction. An Interview With Hyperwülff

“Volume Two: The Divide, begins on the battlefield where the last fight against Robogoat is taking place, and instantly throws us in a kaleidoscope of words and memories recounted by the two protagonists, describing the last moments of struggle between the Great Wolf and the Mechanical Beast, which ends with the annihilation of both.

Hyperwülff, now devoid of a physical body, is forced to roam the cosmos in a different state of matter, and can only interact through the body of The Wülff. The Erionite forces, now in shambles, need to gather their last strength to save the Stele of Laar, infinite source of energy, and symbol of the ancient pact between the planet’s living beings, upon which they swore an oath of fraternity and loyalty.

The Stele is the last chance for the Hyper Wolf to regain a physical body, before being swept away forever in the dark of the Universe.“

The band kindly asked me to do an interview with though I will be speaking to the actual entities that make up Hyperwülff. I was intrugied to find out more about Hyperwülff’s motivations behind their music and how this crazy journey started.

Read on if you want to find out more about this cool band and the epic spaced out story they have to tell….

Hi guys. Thanks for doing this interview. How are things with you today?

Hey there! Good and super excited!

Before we get started on your new album. Sorry I mean audio description of your ever-going battles against the forces of evil. Can you give a brief description or history of the spaced out journey you’ve been facing over the course of your last two albums?

Oook. Hope not to turn this chat into The Hobbit… Volume Two begins where Volume One ended. Erion Speaks was about the battle against the cosmic invader, Robogoat, the evil machine that came to Erion to destroy it and drain all its energy, and introduced the characters. With The Divide we pass a threshold. Time goes back to its normal flow and you progressively start to take contact with places and events surrounding the battle.

Like a flight over everything right before diving back into it. You are witnessing through the eyes of Wülff and Sarge, and you can now see the Ridge, the city of Erion IX, the Great Planes, the temple of the twenty pillars where the Stele is kept… and you can see the final moments of fighting between Hyperwülff and Robogoat. But mainly this is an album about separation. Separation from oneself, from existence, from home (also seen as a comfort zone). And so the two protagonists have no choice left to protect the Stele of Laar but to grab it and leave the planet before it collapses. 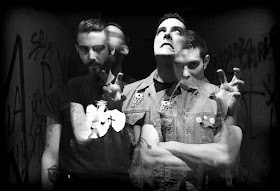 So do the two of you individuals make up the Hyperwulff in question?

We don’t make it up, but rather are made of its same substance, like everything else on the lost planet of Erion. What we do is we let its spirit speak through our music. We are the only channel it has to communicate with the people on Earth.

How long have you been fighting the forces of Robogoat?

The battle took place in a distant space and time. Sarge and Wülff have left the planet since that. All of this already happened. But it is really an eternal struggle, and distances don’t matter.

What happened to Hyperwulff to roam the cosmos in a different state of matter?

At the end of the great battle of Erion, the Hyperwulff was able to defeat Robogoat, but at the cost of its own life. Its spirit lingered like a distant resonance echoing through the void. It now needs the help of the living to regain a physical body and respark the Hypersphere once again.

What is exactly the body of The Wulff. How do you interact with The Wulff?

The body of the Wulff works pretty much like an antenna. He lets the Hyperwulff speak its message through his body.

So what is Hyperwulff’s mission and final destination?

Hyperwulff has no mission. He’s a spirit. An entity. And we need Him to get to the Stele of Laar before the Robogoat does. This artifact is the only remaining piece of Erion, and it’s the most important one because it’s the trigger to its power. The Robogoat wants this power to turn everything into a cancerous mechanical nightmare where only its existence is preserved. On the other hand, the Hyperwulff is this ancient spirit that comes from a place that celebrates life in all of its forms. He is the protector and the vanquisher of the machine.

As far as we are concerned, we are here to spread its message and hopefully convince the people of Earth to join together and share their energy to give the Hyperwulff a new body. That’s what our live shows are for. 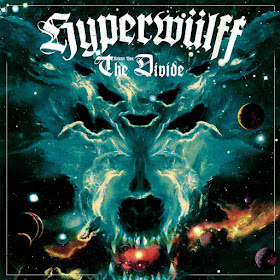 Why did you form this band called Hyperwulff?

It really started as some sort of a joke. We were living in the same flat at the time, and we used to come up with all these weird origin stories and random fantasy-themed ideas. When the name of the Hyperwulff came up, we liked it so much that we immediately decided to form a band around it.

How did the band became to be?

Originally, we just wanted to jam out to heavy riffs and bang our heads in a rehearsal room. We really had little ambition when we started, other than make as much noise as we could. Then on our very first rehearsal, the very first riff we came up with was “Robogoat”. By the end of the rehearsal we had the song pinned down, and that got us really excited because we weren’t expecting it to come out so easily.

It was like some sort of force was guiding our hands! So we made it a regular thing, and after a couple of months we had a few songs sketched out. Then a friend needed a band for some fest they were setting up, and he asked us if we were up for it. We weren’t even sure it was a good idea to play these songs live, but we did it anyway. We found out people liked it, and here we are. It really came out pretty naturally.

Why did you choose Doom/Sludge Metal Music as the best format to tell your story?

Well first off because it’s a lot of fun. It’s raw and powerful, and these are the qualities we wanted from our music. We have always been great fans of The Riff. But mostly it was the most suitable for the storytelling of a violent, gigantic, supermassive battle.

We also spent a lot of time in the punk hardcore/DIY scene so that has always been our main frame of reference, we want to share our music with people who love to share, and we want to take it live where we can all have a good time together.

Why not other genres such which are better suited to tell fantastical stories such as yourselves?

We don’t really feel like we play a proper genre, given that we are influenced by a slew of different, often unrelated things. Of course some references are clearer than others… It’s hard to say. We like to think that this is a starting point, and that we can move towards many different directions. The whole concept allows us to experiment with different sounds and themes and this will happen in the future, for sure.

What can people expect from Volume Two: The Divide?

They can expect an effort to shape an unstable material into a new temporary form. We wanted it to be closer to how we sound live and our friend Bruno Germano at Vacuum Studio did just the perfect job. He helped us a lot under many aspects. He's a good friend and a very talented musician/sound engineer. His approach is very similar to ours, so we worked hard together to preserve some sort of authenticity. There is a broader spectrum of different moods in the album, due to the evolution of the events, but we tried to make it as much organic as we could. For your own amusement there is also a map. Maps are always comforting. 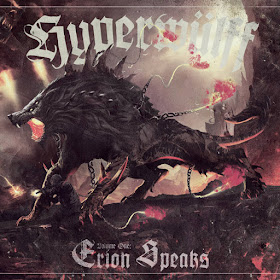 Was this an easy or hard album to write and record for?

We sketch out a lot of riffs all the time, but stitching them together into coherent songs, and then fitting the whole thing into the narrative, is sometimes a painful process. But we don’t like to put pressure on ourselves, we prefer to think about it as a journey, and we like to enjoy both the good and the hard of it.

Recording it was smooth sailing. Bruno helped us to stay true to the songs and the way we naturally play them, and also allowed us to experiment in post-production and to really broaden the sound.

How would you describe your music in your own words?

It's metal but there's something wrong with it. So it's like metal i guess…

Which labels are releasing the album and what formats as well?

Vinyl format will be released by Shove Records, Deathcrush Distro, Dischi Bervisti and Teschio Dischi, and it will come together with the CD. The tape format will come out for Roughness Noise. All Italian DIY labels working with different genres. All good friends.

Will you be performing gigs or festivals to promote the album?

We hope so! We will start with some late summer festivals in September. We'll be in our town, Bologna, at Krakatoa Fest, and we are very excited cause it's a huge meeting. Lots of very good bands like Zu, Messa and Naga will play there. It's such an honor.

What is the song-writing dynamic within the band. Is it a group collective or down to individual(s)?

We try to keep individuals aside from this. We jam a lot in our rehearsal space. Almost all of the music comes from that. When you are a duo it's easier. Everything can change from one moment to another with a glance. Sometimes a song comes together very quickly and never changes in time. Sometimes it takes months to get to a conclusion. We can play a song for one year and then decide it is not sufficient to fit in a record. We don't work on a rush. We discuss everything, about the lyrics and the evolution of the story…

What comes first. Lyrics or Music?

Always music first. English is not our mother language so mostly it stays barks and growls for months and then we put words in.

Before you go, do you have anything to say to your fans?

Do we have fans?! HA HA! we feel like saying “thank you” to a lot of people. Especially to all who keep putting their blood and sweat into this kind of music, whether as listeners, musicians or by organising and promoting gigs. And of course, thank you for sharing your passion and spreading good music.

Words by Steve Howe and Hyperwülff

The album will be released on September 14th 2018 through Shove, Deathcrush and Dischi Bervisti. It will be available in a vinyl+CD edition of 300, 100 of which printed in milk-white vinyl. Of these, 25 will be in ultra-limited edition curated by Teschio Dischi. Tape version will be released by Roughness Noise.