An Interview With BISMUT

Instrumental Psych Doom/Stoner Rockers - BISMUT - will be releasing their excellent debut album Schwerpunkt later this month. The album is very different to your usual Instrumental Rock/Metal albums. As the band experiment with their sound on each individual song held on the album.

You can read my review here. I wanted to find more about BISMUT as they have something different about them which sets them apart from other Instrumental Rock/Metal bands.

Here we discuss the formation of the band, the making of their album and their future touring plans.

Read on for more info...

Hi guys. Thanks for doing this interview. How are things with you today.

Thank you for interviewing us. We're excited. The buzz surrounding our band and the new album is good, so we're feeling pretty good, too.

Before we discuss your new album. Can you give a brief overview of how the band formed and where it is today.

We all know each other from a shared history of playing in different bands in the city of Nijmegen, like Stonerfront Nijmegen, Geiser and Bandito. We did some great shows together in the past with previous bands and had a shared collective with other bands called Nijmegen Rock City. At some point, while having a drink, we decided to do some jam sessions. After a few of those, we had another drink and listened to our jams. We decided they were too interesting to not follow up on.

This quickly escalated into some cool songs. We started planning for our first show with Samavayo and Mother Engine, in our hometown, for which we decided we would have to play 30-40 minutes. And we did.

So that's in a nutshell where we came from. We've been loving it ever since.

How would you describe your overall sound. As you have included quite a few different elements for a distinctive and heavy progressive sound. Especially on your excellent new album.

Thanks for the compliment! We're pretty happy with the album, too.

Our sound is mostly jammy, groovy and riffy. And space. There are times when it feels like there are two different spaceships in our rehearsal room.

We all come from different backgrounds. And we listen to a lot of different types of music, too. From stoner to punk and from metal to jazz and blues. And what happens in our jams we just go with. So our sound is bound to be very unique in that way, because we don't really censor it or try to keep it within a genre. 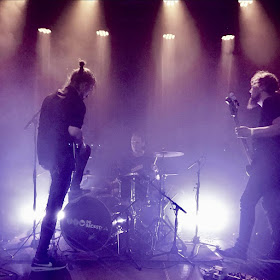 You’re about to release your superb album – Schwerpunkt. What can people expect from the album.

The album is a lovely journey that you can have a drink to. We think you should sit down, relax and let the music wash over you. It's very organic, because all the songs are the best we could do in a small number of live takes. We played everything together and we did no edits whatsoever. We mixed it ourselves, too. So you're listening to a very DIY product.

What is the main theme of the album and why did you call the album Schwerpunkt. As using Google Translations the English Translation – Main Focus or Main Point. Or Google could be talking absolute bollocks.

The title "Schwerpunkt", which is actually German and not Dutch, is based on the concept by Clausewitz in military strategy. It is defined as the thing most precious to the enemy and when they lose it they will concede and end the war. There are a number of different kinds of things that could be considered a "schwerpunkt" and we decided to name the songs after those. We chose names in various languages - honestly just those that sounded the best - because we believe in a borderless community of people in which language is an instrument, not a barrier.

Schwerpunkt in German is also the focal point of a triangle, which of course, we are as well. Being a power-trio and all.

And for us it's also about music. Music can or should be seen as integral to our own "schwerpunkt". It is among our most precious belongings that we would never want to lose. Either playing or listening to it. And preferably both.

We're releasing the album on CD and we enlisted the help of the mighty Lay Bare Recordings to release it on vinyl (limited edition colour mix!). It will be online everywhere, so including Spotify, Deezer, Amazon, iTunes, YouTube and Google Music. 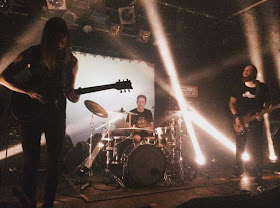 How did you manage to sign to Lay Bare Recordings. Great label.

We have actually known Désirée for quite a while and have always watched each other's mutually interesting developments. Originally, we were going to release the album on Pink Tank Records. But when our contact at Pink Tank went sort of missing, we were very happy to have Lay Bare Recordings step in. We think we may even have a better deal now than we would have had otherwise. That is of course difficult to say, and we do wish everyone at Pink Tank all the best, but Désirée has been a very very big help and we're very happy with her approach and her network.

She's making this thing a whole lot more interesting than we could have done without her.

Just connecting and playing together. We like to jam and we like to think the album reflects that. It's mostly about creating something beautiful together, which is in a sense timeless but also a momentary occasion that will never happen in exactly the same way again.

It kind of depends on the song. For some songs it was difficult to find the vibe where all three of us completely got into it. For other songs, the first or second take was spot on. The DIY approach was helpful, which put us all at ease and made us take all the time we needed to have a good result. 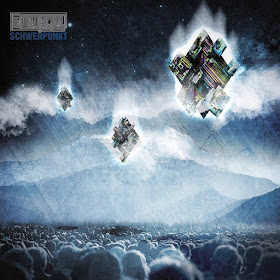 Yeah, we're very happy with it, thanks! Well, Ben Warnecke from Moewn designed it for us. We saw his work on the Moewn/Camel Driver split (which is amazing musically, too, by the way) and we loved the theme as well as the atmosphere of it. So we gave him some specific pointers and ideas to work with and he delivered something even cooler than we had imagined.

You’re from The Netherlands. How would you describe the underground Doom/Stoner Metal scene over there.

It depends on where you are a little bit. There are some amazing festivals and shows in the Netherlands for us but there are also weeks or months where nothing really happens. We do really like the people that are into the music here. The bookers, promoters and fans are all really nice, friendly people who know how to have a party.

Is there a scene for you to perform many gigs. Or do you perform when you can.

We have a nice mix going between doing shows in the Netherlands and in Germany - with an occasional trip somewhere else. We actually get a tiny bit more offers than we are able to play, so we have a little bit of freedom to pick the most awesome shows now and then. We're really grateful to the scene and we get to play nice shows with other cool bands as well.

Can you recommend any other Doom/Sludge/Stoner Metal bands from The Netherlands that people should check out.

The names from the Netherlands that come to mind are Mantra Machine, who are playing on our release as well, Mt. Echo, Graansilo and The Machine. We really like Mantis from Belgium and Mother Engine from Germany. They're not from the Netherlands, but close enough?

Would you change anything at all that you’ve been through with the band.

No, resoundingly not. We're doing this as a very free and open collective which means that whatever happens is meant to happen. None of us have to do more than they're able and everyone is doing as much as they can. So it's all very organic and we're helping each other out. Because we're not forcing anything, it kind of just goes, which makes it fun above all else.

We don't really "write" songs. We record jam sessions and then after listening to them, we make them into songs by stretching some parts, skipping others, shuffling them around and repeating some of them. But all of this is done with all three of us equally involved. And then we practice and change them some more.

Are there any plans for you to travel to over parts of Europe to do gigs in the near future.

Always! We're hoping to play some awesome new places in 2019 and 2020, too. As long as time and space permit, we'll play anywhere we can and want to play.

Thanks for having us! We're excited about the first responses to our album, by critics and fans alike. We are doing what we love and it's amazing that people enjoy that. They're awesome. And so are you, Steve, we might add. What you're doing is inspiring and important to a keep a scene lively and we thank you for it.

Words by Steve Howe and BISMUT

Schwerpunkt will be available to buy on CD/DD from the band and Vinyl via Lay Bare Recordings from November 26th 2018.