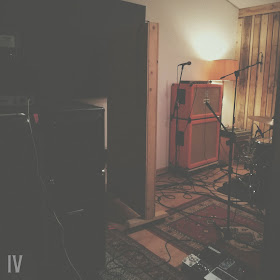 Archdruid are a Psychedelic Sludge/Doom Metal Duo from Canterbury, UK. The band will be releasing their first full length record – IV. IV was recorded and written simultaneously and the results are mighty impressive. As this album has a very raw sound that only elevates their music to great heights.

Taking influence from bands such as Pelican, OM and ISIS (The Band). Archdruid add a more progressive Jazz feel to their music. Archdruid are an instrumental band and a very loud one for that. IV is a very challenging album to listen to as the band never settle for one final sound. The album moves freely from one different level of sound to the next. IV is made up of two epic songs IV (Part One) and IV (Part Two).

IV (Part One) is the mellower of the two songs with the band setting up a constant rhythm of Drone based elements for the band to further expand upon within the twenty five minute running time. The Psychedelic riffs take time appear however they bring a world weary style of Doom, Sludge and Stoner Metal with them. The mood can be quite experimental and quite raw. However you cannot deny the excellent instrumental work. The song does become heavier towards the very end and that’s where IV (Part Two) takes over.

If IV (Part One) was all about control and restraint then IV (Part Two) is all about pure aggression and playing a looser style of Doom/Sludge Metal. Archdruid bring their “A” game to this epic slice of heavy rock/metal goodness with the riffs moving from heavy psychedelic grooves to a highly stylized Progressive Jazz based approach. The song can be quite sombre and tender at times. However the best part of the song is when Archdruid leave the mellow parts behind and play the heavy psychedelic riffs that makes their music more alive as a result.

IV is a challenging album to listen to. Maybe the album could have done with better production values but I expect that with future releases. As Archdruid have shown a lot of potential on this album and I want to see how they explore their music further on future releases.

Overall, IV is a stunning, thrilling and sometimes breathtaking album that sees Archdruid hopefully building a bright future for themselves.