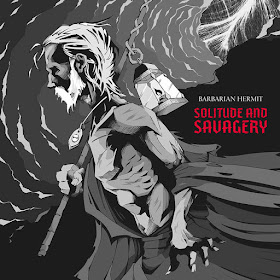 Solitude And Savagery is the highly anticipated new album from Manchester Progressive Sludge/Doom Metallers – Barbarian Hermit and the band have gone all out with this album. Check out the facts below.

So lets say the album sounds incredible throughout and it sounds like a true HEAVY METAL album that will expand the bands fan-base in a huge way. So let’s get down to business. What is the album like. Well I will admit it’s not the most easiest album to listen to and that’s down to Barbarian Hermit playing a wide range of different musical genres such as Doom, Sludge, Stoner, Psych, Prog and NWOBHM in different places.

The album moves into so many different directions that it’s quite hard to keep up and Barbarian Hermit thrive on that fact. As they have a blank canvas to create a wild progressive sound that I can see people drawing comparisons to BOSS KELOID.

The album does draw heavily from bands such as DOWN and Mastodon. Though the heavy progressive Sludge/Stoner riffs are more direct and with a heavier vibrant sound.

Opening song – Enter The Hermitage – is perhaps the standout song on the album. As the band play primarily a Progressive Doom/Sludge Metal sound that allows the band to bring other musical elements into play. The song is quite intense and has a wild experimental feel. Speaking of BOSS KELOID, Alex Hurst from the band makes the first of two appearances on this album and you can hear his distinctive vocals.

Second song – Black Mass – is the first chance for lead vocalist Ed to carry a song on his own and he puts in an epic performance that elements of the legendary NOLA scene heard within his vocals. The music itself is a more leaner NOLA/Sludge/Stoner based sound and shows another side to Barbarian Hermit’s overall sound. The music is fast-paced and the lyrics have quite a dark edge to them.

The next two songs – No Sleep and Beyond The Wall – were some of the first songs I had issues with when I first listened to the album. As I originally thought that the band didn’t know what they wanted this part of the album to be or sound like. From your first listen, Barbarian Hermit add a few twists and turns where the music changes from a standard NOLA sound to one that is influenced by Thrash Metal in places before settling on a distinctive modern style of Sludge/Stoner Metal. However after taking everything in after many repeated listens, these songs rank as the heaviest and finest songs held on the album.

The final 3 songs Life Breather, Reawaken and Laniakea sees Barbarian Hermit change their style of music yet again with the album becoming more experimental and progressive which will perhaps delight the more adventurous Doom/Sludge/Stoner Metal fan than the casual listener. These songs see Barbarian Hermit adapt a more Thrash Metal based sound which is quite bold for a debut album such as this.

The song Reawaken has guest vocals (WOO!, according to the BandCamp Page) from Alex Hurst from BOSS KELOID again and the even the owner of APF Records himself, Andrew Field makes an appearance. Another very cool and fun aspect of this album is shown right there.

Solitude And Savagery is an album that lives up to it’s the last part of it’s title. As the album is very savage and one that demands your full attention. Barbarian Hermit may not be well known now, however give these guys a couple of years and perhaps another full length album and I wouldn’t be surprised to see the band performing all of the major and established Hard Rock/Heavy Metal festivals and perhaps gaining support slots for some of the major big hitters within the Doom/Sludge/Stoner Metal scene.

This album is a brutal and brilliantly entertaining album from start to finish. Give the album a few listens to fully appreciate this album. For a debut album, this is as good as it gets.

Thanks to Lisa at Hold Tight PR for the promo. Solitude And Savagery will be available to buy on CD/DD via APF Records from November 16th 2018.