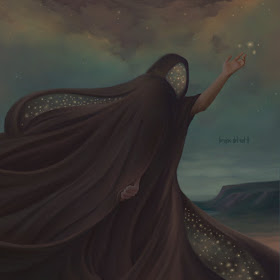 Brujas del Sol were a band that I hadn't come across before. That seems to be happening to me a lot recently. Though I'm not complaining as I'm discovering a lot of great bands and these guys are perhaps the best I've heard yet. Though that wasn't the case when I first heard their new album II.

Brujas del Sol play a heavy psychedelic version of Desert/Stoner Rock with elements of Post-Rock and Post-Doom being added in. Some parts of the album even have a poppier vibe to them as well. This all makes for a highly intriguing and experimental sounding album. Brujas del Sol make you wonder where they will take you next on this album with each passing song.

Opening song - Teenage Hitchhiker - may have a seedy name but Brujas del Sol approach this song as an upbeat Post-Rock/Desert Rock song that takes influence from bands such as Yawning Man, Elder and Weedpecker. The music is quite complex and progressive in equal measure. Though Brujas del Sol have a commanding presence that's simply hard to ignore.

Second Song - Sea Rage - is a shorter song with Brujas del Sol playing a more standard Post-Rock it's not as exciting as the first track but it does have some thrilling heavy sounds that may surprise you along the way.

Third song - Sisterlace - is where vocals actually appear and they have an immediate impact on the band's music with Brujas del Sol becoming an almost different band as a result. The music becomes heavier and more daring with psychedelic sounds becoming the main focus. The vocals take a few moments to get fully used to as I was expecting something different.

Fourth track - Fringe Of Senility - is a very strange song indeed with Brujas del Sol adding elements of Electronic music into the mix and offering and eighties sounding gloomy landscape. The whole song feels inspired by the electronic bands from the eighties but given a Psychedelic Stoner Rock makeover. This is perhaps my favourite song on the album. As it shows you how really out there Brujas del Sol can actually be.

The band carry on the Electronic style influence on the next song - White Lights - but with a calmer Post-Rock sound. The album carries on this style of music for the remaining two songs - Polara and Spiritus. With Brujas del Sol moving around the different style of music they create on the album.

Spiritus is another standout song on the album with the song running almost ten minutes in length. Brujas del Sol have managed to create an exciting and genuinely original sound for this album. Truth be told I was left wanting more from the band. As this album is epic as it comes.

Brujas del Sol brilliant and exciting use of different musical sounds that will have you coming back for more.

You can buy II on CD/DD/Vinyl now via Kozmik Artifactz.