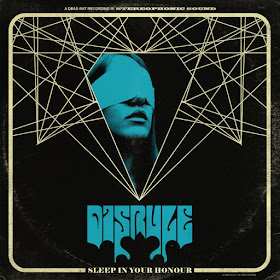 Sleep In Your Honour – Tracklisting

Disrule new album – Sleep In Your Honour – is not your most straight-forward Doom/Stoner Metal album. As the band include a few different aspects of music I didn’t expect. Mainly classic rock and vintage sounding heavy metal. This album is one that will appeal to both the modern day Doom/Stoner Metal fan and the Classic Rock brigade.

Disrule do embrace a more theatrical doom metal existence on certain parts of the album especially with the lyrics and vocals. The guitars have a twisted FUZZ Rock appeal to them which you can hear right from start on the excellent opening song –Sleep In Your Honour. The song is inspired by bands such as Kyuss, Saint Vitus and Black Sabbath and Disrule embrace their wicked doomed out persona with relish.

The album is very short running under thirty minutes or so. However Disrule use time wisely by creating precise Doom/Stoner Rock songs that all have a wicked groove to them. Songs such as: Going Wrong, Occult Razor, (Gotta Get Me Some) Control and Enter The Void sees Disrule add a more twisted and seedy style of Psychedelic music into the mix.

The best part of the album has to be the final two songs – Follow Me and How You Suffer – as the band embrace a more Stoner Rock vibe and Disrule throw caution to the wind and play some epic Stoner riffs that leave you wanting more.

The production of the album is top-notch. As the album is very loud indeed. I don’t know if I’m getting too old but I had to turn the volume down at one point. So this is a very loud and heavy experience which is I suppose what you want for a Doom/Stoner Metal album.

The album has a wicked occult backdrop for the majority of the songs and this allows Disrule to have fun with their music and keep things moving along at a cracking pace. Overall, Sleep in Your Honour is a superbly entertaining and well-made album that will have you on the edge of your seat.

To get you into the mood for the album you can listen to this exclusive song premiere of Going Wrong from their upcoming new album.


Disrule on the song "Going Wrong":

"It was a really nice collaborative effort. Everybody wrote a riff for it and Allan and I both wrote lyrics. Allan had the verses and I had the chorus melody, but no lyrics. He said it was about those times when everything’s going wrong, going to shit and down the drain. “Just elaborate on that”, and so I did. In the studio, our producer Jacob Bredahl really liked this particular take because of the drums. Especially the opening fill and the toms in the C-part of the song. So we just took his word for it and kept it. As I remember it, it all came together really fast. Y’know like ‘Paranoid’ - written in five minutes. " - NP

"'Going Wrong', also known as 'Doom 3' during the 'Sleep in Your Hounor' writing / demo process. The song is about realizing that your relationship is en route straight to hell, and at the same time avoiding to do anything about it, because of the comfort it still provides, and fear of what's going to happen next." - Allan