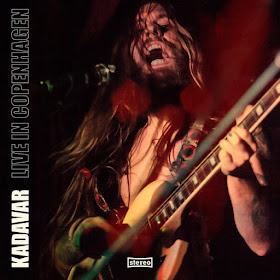 A lot of live albums I’ve listened to recently have really disappointed me. As the overall sound of the album has been too flat or the live album doesn’t match up to the classic live albums that were released years ago. Kadavar have just released their 2nd live album with Live In Copenhagen and it’s an album I wanted to change my overall conception of modern live albums.

Kadavar’s last live album “Live In Antwerp” was released in 2014 before the band released their “breakthrough” album, Berlin back in 2015. Berlin was an album that made people finally take notice of Kadavar and their excellent blend of Classic Rock, Blues Rock, Psych and Stoner Rock riffs.

Live In Antwerp was a very good and highly entertaining album that showed the full power of Kadavar’s classic rock sound. However it left me wanting more. As I’ve seen Kadavar live in action and the album failed to show the bands majestic live performance. So I was a little bit worried when the band announced a new live album with Live In Copenhagen.

I shouldn’t have worried. As this album is one of the best live albums I’ve heard in some time. The album is bang on point by presenting Kadavar as a true force of nature. This is Kadavar at their majestic best. They’ve picked the best songs to perform from their superb back catalogue.

Kadavar blast their way through songs such as: Skeleton Blues, Doomsday Machine, Pale Blue Eyes, Into The Wormhole, Die Baby Die, Black Sun and many more. The whole atmosphere is very raw but that works to the albums favour.

Live In Copenhagen is ALL KILLER AND NO FILLER. Kadavar are one of the hardest touring bands currently working in the Stoner Rock scene today. The band never seem to stop touring at the moment and Live In Copenhagen proves why their fans will see the band as many times they possibly can.

I will admit I was slightly underwhelmed by Kadavar’s last album – Rough Times. However, listening to some of the songs from the album played live, has allowed me to revisit that album and I rate it more highly. It took some time for me to finally come round and I’m contributing that change of heart to this live album.

Live In Copenhagen is light-years ahead of Live In Antwerp. As Kadavar have matured as musicians and have a more magnetic stage presence. If you’re a long-time fan of Kadavar then Live In Copenhagen is an essential record to add to your existing Kadavar record collection.

Live In Copenhagen ranks as one of the best live albums I’ve heard in a long time….

Thanks to Mona at All Noir PR. Live In Copenhagen is available to buy on CD/DD/Vinyl now via Nuclear Blast Records.