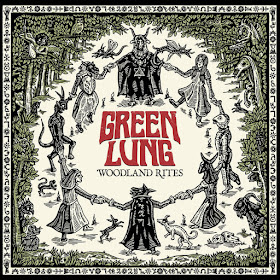 1.Initiation
2.Woodland Rites
3.Let the Devil in
4.The Ritual Tree
5.Templar Dawn
6.Call of the Coven
7.May Queen
8.Into the Wild

Green Lung is a South London five piece that stormed into the metal underground early 2018 with their EP - Free the Witch. The band now unleashes their tremendous debut album, Woodland Rites. Green Lung delivers an instantly appealing brand of fuzz heavy, occult drive rock with a serious doom/stoner vibe. The hooks and choruses on all eight tracks are instantly addicting. There is a dark foreboding theme that lies under the surface of the bands intense rock delivery with images of witchcraft, Satan, medieval knights and nature.

Initiation opens with a folksy acoustic intro filled with birds chirping and organic noises before exploding into a mighty riff that crashes right through to the album's title track. Woodland Rites follows with vivid imagery of an occult ritual in the darkest depths of a lush forest. The band’s sound as a five piece shines through on this track as along with the seering riffs and crashing drums and cymbals there is a haunting organ helping to navigating through this dark ritual.

Let the Devil In opens with a brief acoustic intro that brings some charm, like the devil’s wink, before exposing you to a massive riff and invitation to turn away from the light and embrace your true master. The breakdown of the song features more killer organ work along with a little saxophone to spice things up. The band brings the echoey, reverb laden groove in with The Ritual Tree with it’s driving drums and crashing cymbals accentuated with some killer guitar breakdowns and a monstrous solo.

The reincarnation of the knights of the round table into evil servants of darkness is a theme of soaring guitars and keys of Templar Dawn, a stunning track to say the least. The band brings the driving beat back with the killer Call of the Coven before slowing the groove down with the dark, brooding May Queen. The album closes with the driving riff and heavy groove of their call for a solitary lifestyle and return to nature of Into the Wild.

Their sound is a mix of Kadavar/Uncle Acid/Witchcraft with some B.O.C. and Uriah Heep like 70’s metal and a little 80’s double lead guitar magic sprinkled in. There is nothing to not like (yeah, I know a double negative) about Green Lung. The songs are strong, the lyrical imagery is top notch and the music does not miss a beat. Woodland Rites is one of the best debut records I have heard in some time.


Thanks to Becky at Pioneer Music Press for the promo. Woodland Rites will be available to buy on CD/DD/Vinyl via Kozmik Artifactz from March 22nd 2019.