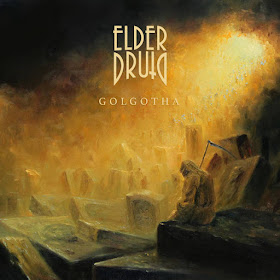 Northern Ireland Sludge/Doom Rockers Elder Druid are back with their new album Golgotha and like the title suggests the band have gone under a Blackened Doom transformation since their acclaimed debut album Carmina Satanae from 2017. Golgotha features a nastier style of Occult based Doom/Sludge Metal and the album has a dark potent outlook on life.

This can take a few moments to fully get used to but the riffs are heavy and plentiful from start to finish with the band playing the right balance between heavy and light moments for a more experimental approach to their music.

Opening song – Sleeping Giant – is a daring blend of Doom/Sludge Metal with a Blackened Metal style atmosphere that oozes menace from the start. The vocals from Gregg are quite evil and I was surprised to hear how aggressive and dark Gregg goes with his vocals. Sure they were dark on the last album but not as sinister as this. So top marks for the band bringing the “DOOM” atmosphere to the party with this song. It perfectly sets the scene for the rest of the album to follow.

Second song – Golgotha – starts off casually with a few drum beats before a heavy evil FUZZ based guitar joins the ranks. The song carries on the depressive style of Doom/Sludge Metal as the band take influence from some of the heaviest Doom Metal bands currently out there such as CONAN in places. The music is down-tuned but with the added aggressive Sludge Metal grooves allowing Elder Druid to perfect their nightmarish vision.

Third song – Sentinel – is an instrumental song where the band bring Ambient and Psychedelic sounds to the album and it’s quite cool to hear. Elder Druid play some fantastic progressive guitar solos on this song and it made me want to hear more of this style of instrumental music from the band.

Fourth song- Vincere Vel Mori – is Elder Druid in full DOOM METAL mode with some of the harshest lyrics contained on the album. The vocals from Gregg are scary and aggressive yet again but it’s the music that’s the main standout with precise bleak grooves creating a gloomy and unforgiving environment. The song does change direction from time to time but that’s a good thing for Elder Druid to try different things with their music. This is easily one of the best songs on the album.

Elder Druid carry on the bleak journey with the final 4 songs. As the tone becomes heavier and nastier in places with a few cool progressive passages along the way. The standout songs from the 2nd half has to be Dreadnought and Paegan Dawn Of Anubis.

Golgotha is one lean, mean and aggressive album that will give you a few nightmares along the way. Elder Druid should be proud of this album. As this is a daring album that makes no apologies for it’s uncompromising bleak vision. This is what at true Doom/Sludge Metal album should do and Elder Druid have accomplished that feat.

Thanks to Elder Druid for the promo. Golgotha will be available to buy on CD/DD from Jan 17th 2020.