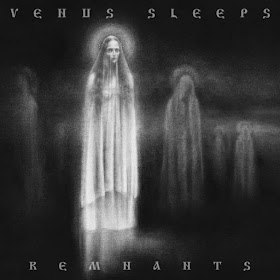 Remnants is the new album from Psychedelic Doom/Stoner Rockers Venus Sleeps and their first new album in almost 4.5 years. I can remember listening to their 2015 debut album Dead Sun Worship and being suitably impressed with their heavy progressive style of Psychedelic Doom and Stoner addictive sounds. This album carries on that early sound but with a more darker and unforgiving style of music.

The album is quite complex and offers a myriad of different Doom/Stoner Metal atmospherics that’s woven with a classic-sounding Black Sabbath influence with the gloomy guitars and heavy amplifier worship that’s used throughout the album. Remnants weaves a dark tale with elements of 70s Doom Rock/Metal but with an unapologetic modern Stoner Rock/Metal drive that also has a huge Prog Rock sound holding everything together.

Remnants runs for almost 54 minutes and you’re treated to 6 songs that are quite long individually and have varying different sounds to each other. The guitars are straight from from your classic Doom/Stoner Metal rulebook but the band add a Progressive Rock outlook to their overall sound which can be quite cold and calculating in places. Venus Sleeps never seem to be in a rush with their music as the riffs are played an excellent slow-to-mid pace that allows the listener to soak up the entire atmosphere of the whole album.

Sie’s vocals have an honest and earnest feel to them but still offering a menacing drive to them which drives the narrative of the album to some epic highs. Sie channels his inner “Ozzy” and “Uncle Acid” on this album but still providing his own great style of vocals on Remnants.

The lyrics are another highlight with Venus Sleep writing some terrific words to match the almost “Occult” style riffs that expertly played on the album.

There is a lot going on this this album and it may take a few spins to fully appreciate the many ideas that Venus Sleeps have included on this album. Though it’s never boring and you feel quite excited for the next song to appear.

The standout songs on the album are: Pillars, Dust, Tides Of Ash and Call Of The Sun. As Venus Sleeps feel more in control of their music and it shows with some of the best and heaviest sounds on the entire album.

Venus Sleeps have delivered a fresh-sounding and expertly produced album that allows the band to deliver their own blend of Psychedelic Doom/Stoner Metal that leaves you with a gloomy outlook on life long after you’ve listened to the album.