Band To Check Out - LUNAR SWAMP 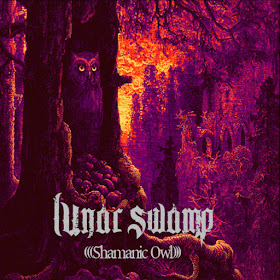 Lunar Swamp is a Psychedelic Stoner Metal from Italy with a heavy slab of Blues Rock, Doom and Fuzz Rock running through their veins. The band have just released their excellent new song - Shamanic Owl and it's almost 8 minutes of delicious and neck-breaking Stoner Metal that is powered along by a heavy streetwise Blues Rock/Fuzz Rock attitude.

The band also show they're a dab hand at adding layers of distorted noise to the mix and the vocals from Mark are quite powerful allowing Lunar Swamp to create an almighty racket.

I don't know if the band have an EP or full length album in the works but this song shows a band with a lot of promise. If you dig bands such as Black Sabbath and GEEZER then Lunar Swamp should be on your radar.

The song does go through many different stages of Stoner Rock/Metal but it has a winning attitude and cracking production to match.

I'll be keeping an eye on these guys and you should to.