Shadow Witch - Under The Shadow Of A Witch 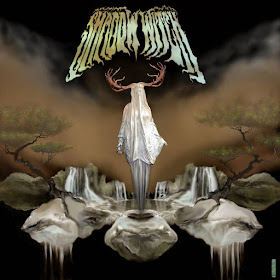 
Under The Shadow Of A Witch - Tracklisting

Shadow Witch impressed me a great deal back in 2017 with their last album – Disciples Of The Crow. And now almost 2.5 years later the band are back with Under The Shadow Of A Witch. This album has a more devilish and streetwise attitude compared to their last album. The riffs are mostly the same which is a good thing as Shadow Witch carry on the good work they created with their last record.

The album is a blistering mix of Doom, Grunge, Heavy Rock and Stoner Rock attitude. The band adapt a more classic Hard Rock feel to their music as well especially on the earlier tracks such as Spearfinger, Demon’s Hook, Wolf Among The Sheep and Witches Of Aendor. The music is fresh and fast-paced with the grizzled guitars laying down doomy riffs with the vocals having a fresh gloomy perspective to them.

There are shades of NWOBHM driving the music to greater heights on this album and Shadow Witch seem more energized than I’ve heard previously. The music is always constantly heavy and addictive with the band paying homage to the classic Hard Rock/Heavy Metal sounds of the last 50 years or so. So you can expect shades of Black Sabbath, Deep Purple and Iron Maiden within this album’s DNA but still offering a Doomed Out Stoner Rock perspective.

The lyrics is what gives the band the devilish and streetwise attitude that I mentioned earlier in the review. The lyrics feel quite real despite the “Occult/Doom” based presence of them. So take notice what Earl is singing about on this album. As there are some great lyrics to remember and perhaps even sing-along with.

The best moments appear on the 2nd half of the album where Shadow Witch branch out into heavier and progressive territory especially on the 8 minute plus epic Fountain which features the all-round good dude and one of my favourite people in the Stoner Rock scene – Pat Harrington of GEEZER fame – playing slide guitar. So another cool thing waiting for you to hear on the album.

I have to give the band credit for adding a different version of the album on their BandCamp Page. This version is all instrumental and is split into two different acts listed below:

That was really cool to hear. The album sounds very different as an instrumental album. As Earl’s vocals add a powerful presence to Shadow Witch’s overall sound. However, this is a still a great idea to include.

Under The Shadow Of A Witch is another winning album from Shadow Witch and will no doubt keep their established fanbase and the Doom/Stoner Rock community entertained for a long to come. Well, until their next album…

Thanks to Mona at All Noir PR for the promo. Under The Shadow Of A Witch is available to buy on CD/DD/Vinyl from Argonauta Records now.
Links: