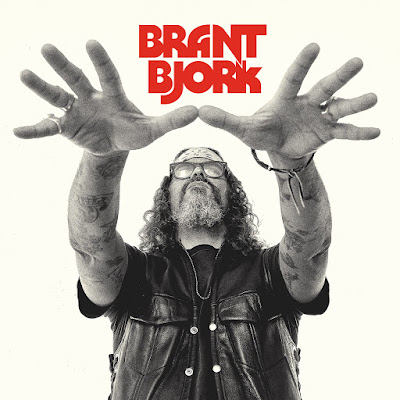 Brant Bjork releases his 13th full length album with this self-titled record and it’s a classic sounding Brant Bjork album in every sense of the word. Brant goes back to his roots on this album with the legendary musician playing all the instruments on this album and this record is quite different from his previous few albums. For myself personally, this album reminds me of “Gods and Goddesses” and “Black Flower Power” with Brant still creating a uniquely different perspective on this album as well.

Brant brings his “A” game on this album with both the music and lyrics having a more personal feel to them than we’ve heard from him recently. The album is a mixture of Desert Rock, Psych Rock, Stoner Rock and a healthy dose of Classic Hard Rock which we all know how Brant ultimately delivers.

Opening song – Jungle In The Sound – is a 70s influenced song that’s quite mellow to begin with but has splices of Heavy Hard Rock Action with Brant bringing a laid-back and direct Psychedelic Stoner Rock to the party but with plenty of soul conveyed in Brant’s vocals. The lyrics are quite clever, witty and deceptive in all the right places and this song is a great track to open the album with. As it shows you a glimpse of Brant Bjork that we haven’t heard over the last few albums or so.

Second song – Mary (You’re Such A Lady) – is a hazy and heavy psychedelic number with Brant offering a laid-back vocal performance for the majority of the song but the atmosphere does become heavier with the powerful Desert Rock grooves building upto a classic sounding Stoner Rock vibe with trippy vocals to match from Brant.

Third song – Jesus Was A Bluesman – tells an interesting story with Brant singing a song that is more Blues Rock orientated in places but with the whole story having a deep and powerful hidden meaning which is perhaps best upto the listener to fully understand. The music is slow-paced but this song has a few moments of heavy Desert/Stoner Rock riffs to show you Brant hasn’t forgotten how to rock out when time calls for it.

Fourth song – Cleaning Out The Ashtray – is perhaps the standout song with Brant bringing his trademark rebellious sound to a modern setting with intelligent lyrics that move the song along to a powerful conclusion. The Psychedelic and Blues Rock guitars allow Brant to play some fresh sounding guitar solos with great drumming to match. The song runs for almost 7 minutes and Brant brings a vintage atmosphere to the party that has an eerie 70s Hard Rock feel.

The second half or the album carries on with the stripped back and no frills approach of the album but Brant still offers a deeply rich and creative sounding experience with intelligent lyrics that can be quite deceptive in all of the right places.

Songs such as Duke Of Dynamite, Shitkickin’ Now and Stardust & Diamond Eyes feel like they were based upon Brant’s youth and growing up. As the lyrics yet again have a deep personal feel to them. There are some funny lyrics spliced throughout the album and perhaps mostly on Duke Of Dynamite.

Brant never releases the same album twice. He’s always bringing something different and original with each passing release and this album is no different. This maybe more laid-back than previous albums but it’s still full of great songs that shows the world why Brant Bjork is perhaps one of the most important voices within the Desert/Stoner Rock scene.

This album is a masterclass of Desert/Stoner Rock. End Of.

Thanks to Claire at Purple Sage PR and Mona at All Noir PR for the promo.