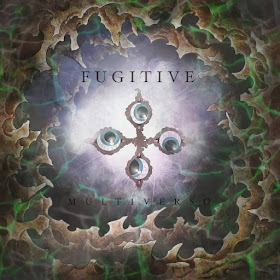 On their newest release "Multiverso" Fugitive display their constantly evolving instrumental mixture of rock, metal, prog, post-rock and stoner-rock in a psychedelic flair accurately represented in the multidimensional concept and artwork designed by Matteo Lescio. The tracks are craftfully mixed by Christian Henrik Ankerstjerne, who gave the project very distinct traits and a rock-solid foundation for the very much diversified and at times ethereal guitar work.

Heavily inspired by meditation, psychedelia and drone music, the 4th record by the band features vocals, a concert-guitar piece and even a purely drone track for the first time in Fugitive discography, which furthermore extend ways of expression in future works.Fugitive still prefers to present their live material at peculiar outdoor sessions like the legendary Dunajam cult festival and the Mountain Session festivals.

"Multiverso" is for fans of Russian Circles, Pelican, Torche, Town Portal, City of Ships, Baroness and a lot of other contemporary bands Fugitive greatly appreciate and support.


The band have said this about the new video:

"This song is about the frightening thoughts of what's out in the universe and freaky theories about the multiverse. We were stunned by the artwork for the album cover and came to the idea of using its elements in a music video. The song we picked features interesting new ideas like a guitar solo and even vocals but don't worry - we are not planning on getting a singer! "

Thanks to Dominik at All Noir PR for all of the info.
Outlaws Of The Sun at 12:00
Share
‹
›
Home
View web version