An Interview With BRANT BJORK - Discussing his new band STONER

The Stoner Rock world was possibly excited when two of it's most legendary and iconic musicians Brant Bjork and Nick Olivieri announced in late 2020 they had formed a new band called STONER.

The pair last played together in the short-lived VISTA CHINO project. This time the guys are joined by Brant's regular drummer Ryan Güt for this project.

STONER will be making their debut live performance on Saturday 20th Match 2021 when they perform for the final Live In The Mojave Desert performance which has been happening over the last couple of months. With performances by the likes of Earthless and Nebula impressing fans already.

I caught up with Brant recently where we discussed the formations of STONER and the future plans for the band.

Hi Brant. Thanks for doing this interview. How you doing today.

How did the band come together.

Nick called me up and wanted to jam. So we got together and we were having a blast and this felt right. It was cool all of us playing together. Felt like we were kids starting out again just playing for the fun of it without any outside pressure.

We all put our musical influences into this via original jam sessions. This feels like a mixture of Punk Rock, Metal, Blues Rock and Hard Rock. Some stuff we’re already known for and some stuff that will surprise and hopefully entertain people.

Why the name STONER and how you come up with it.

That’s all down to Nick. He just came up with the name saying let’s not complicate things let’s call the band STONER. And that was that.

DId you feel calling your band STONER was having a good laugh at yourselves or just calling what it is.

That’s exactly the reason. It’s what we think is STONER ROCK. When I was growing up a STONER was a person changing the rules and being rebellious. Doing your own thing and being different to the mainstream. KYUSS is considered Stoner Rock but I never originally considered ourselves as a Stoner Rock band. We were just young kids playing music that we wanted to play and hear. And I’ve luckily made a career and a living from playing music which I’m ultimately grateful for.

What’s it like for you performing in a new band. As it’s been a long while since you performed drum duties for VISTA CHINO and performed with Nick as well.

It’s been nothing but fun and I’ve had a blast playing with Nick and my drummer Ryan Güt. I wanted to do something different and STONER allowed me the opportunity to do this. This project feels right for me especially during the pandemic. It feels good vibing new ideas off Nick who is one of my closest friends and I can’t wait to perform these new songs to a live audience. As I feel these songs deserve to be heard by a live audience. 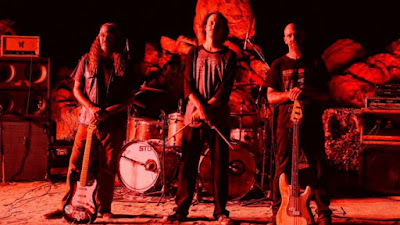 Just 3 friends playing the music they love that they created in lockdown during this pandemic. Everything was put together at the last minute and I’m hoping our fans enjoy this new musical project we call STONER.

This is one of the most enjoyable bands I’ve been part of. As I’m playing with my friends and our public debut performance in a very unusual circumstance.

We’ve never done this kind of performance before and it’s so very new to us but we wanted to play music again and this is the next best possible way to folks to hear our music.

How did you become involved with this Live concert performance

This was all arranged at the last minute. We were asked do you want to do this live performance. We agreed but then were told “Well good but you needed to leave about 5 minutes ago.”

So it was very-paced and a bit of a blur in places but we got it all done.

We performed in the desert back in October 2020 and it was a good way to get our creative energy out that was built up during the pandemic. We played a cool set and it was good playing these new tunes in sort of a new setting for us all. It was also nice being part of an actual band again. As it’s also been that long for me being part of a band such as this. We hope our fans enjoy this performance and hopefully more shows that will be coming from us in the future.

There have been some fallouts and bad experiences since we’ve performed that set. That’s the music business for you. You perform something good with your close friends and then something bad happens. But l want the fans to view our live performance and the other bands involved. As they all played great sets.

Sorry to hear you've had issues from being involved with this project or performance.

Yeah. It happens. We have this really cool band that we wanted to share with the world and then something negative appears for us to deal with. However, you move onto the next challenge and that's what we're doing. We continue to make music and hopefully our fans will enjoy this and come along for the ride.

What are the long term plans for STONER. Is this a one-off performance or a full time project.

This is a full time thing. We’ve got long term plans for STONER and the music that we create. We’re booking tour dates for 2022 onwards in Europe and possibly in the United States.

Those plans are in the hands of our booking agents but we’ve been told the pandemic should be under more control next year and more areas will be open up for live performances to happen.

Will that be festival dates or your own tours.

It’s a mixture of both. Mostly festival dates but we will be doing our own shows at small intimate venues. Though I don’t know the full schedule. As I said before, that's in the hands of our booking agents. Though, I’m looking forward to getting back to performing live. 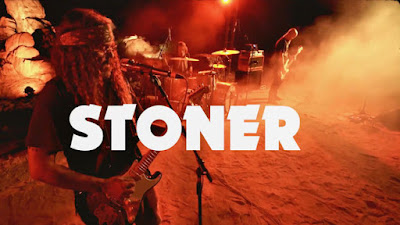 What influenced you all when recording new music as STONER or originally jamming together.

People can expect a mixture of solid hard-rocking tunes with a bit of everything thrown in. Punk Rock, Hard Rock, Blues and Stoner Rock. It’s got that manic RAMONES raw energy with stuff you know what to expect from us all. It’s pure STONER RAWK…..

The pandemic has put a stop to our lives in some way but it’s probably harder for you being a musician and your job relies on you performing live.

It’s been both a blessing and a downside. Downside being that I’m not active that I normally am and I do miss performing.

However, I’ve spent amazing time with my family as I have two young boys who are 9 and 10 years old. I’ve gained some wonderful memories and experiences with my family that I probably wouldn’t have experienced if I was constantly on the road.

I’ve extended my contract with Gabe at Heavy Psych recently. As it’s been a wonderful experience and Gabe is on the same page as myself both creatively speaking and music-wise. So it was an easy decision to make. It’s a funny story but Nick told me all about Heavy Psych Sounds. As they just released all the Mondo Generator reissues and I was impressed by the reissues and I asked Nick who did all this. Nick advised it’s a great guy called Gabe at Heavy Psych Sounds over in Italy.

I only knew then of Gabe being in Black Rainbows as they supported me once when I played an Italian date. I had no idea he started a record label. So it started from there and I’ve been blessed having my recent new albums released and some of my old albums being reissued on vinyl thanks to Gabe at Heavy Psych Sounds.

Have you been working on any new solo material during the pandemic.

It’s your birthday this Friday. Happy birthday Brant. You got any exciting plans.

Thanks man, Really appreciate that. Just spending time with my family. All I can do at the moment which I’m always eternally grateful for.

I want to say thanks for your time. It’s always an honour talking to you and catching up with you. Looking forward to hearing STONER in all it’s STONER ROCK GLORY.

Thanks Steve. Thanks for interviewing me. Take care.

You can pre-order to view STONER - Live At Mojave Desert here.

Thanks to Mona at All Noir PR for arranging this interview. Thanks to Brant for taking the time out to talking to me.
Links
Instagram
Outlaws Of The Sun at 09:50
Share
‹
›
Home
View web version