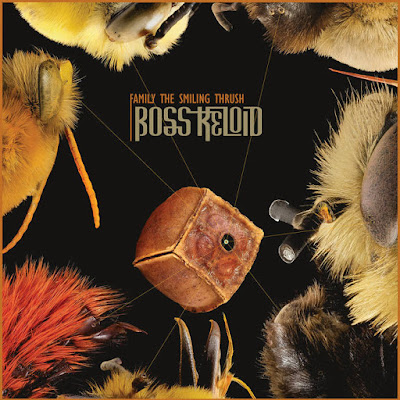 Boss Keloid changed their musical and creative path for the better when they released their 2018 album  Melted On The inch. The album was acclaimed within the underground and mainstream press and showed a different side to the band with it’s lush and artistic style of Psychedelic Sludge and Stoner Metal blended with classic Prog Rock/Metal sounds.

The band return with their next exciting chapter with Family The Smiling Thrush. Boss Keloid has teamed up with Ripple Music for this release which was an unexpected surprise. As I would never have thought Boss Keloid would be the type of band that Ripple Music would go for. Though, here we are and it’s good to hear that Boss Keloid have carried on the same creative musical choices on this album but with a more mystical and emotional feel.

Boss Keloid feels inspired by Peter Gabriel’s time with Genesis on certain parts of the album, with the band going in offbeat, weird and wonderful trippy directions but more about that later.

Opening song Orang Of Noyn could have easily come from their last album but you can tell the band have brought a more worldly and eastern vibe to the album but told through a powerful modern day Psychedelic Sludge/Stoner Metal narrative. The song lasts for almost 10 minutes and the vocals are powerful and emotional as ever. The music is very multi-layered and quite nuanced which allows Boss Keloid to even try new things with their music despite being quite familiar to their last album.

Second song Gentle Clovis is a song that’s getting major attention showing people the change of direction Boss Keloid have taken this album and it remains one of the album’s standout songs. The wide array of different progressive layers shows that Boss Keloid have upped their game on this release, Heavy Psychedelic Grooves with a mature mainstream sound but still having a powerful Sludge/Stoner Rock element to it all. The song is superbly poetic and euphoric in equal measure thanks to the wonderful lyrics the band have written for this album.

Boss Keloid runs wild with their new found Psych Rock outlook and I will say breathe new life into the Sludge/Stoner Metal genre which they hinted at only in small doses on Melted On The Inch. However, this record sees Boss Keloid run crazy with their musical imagination with the heavy powerful sounds moving into the realm of Progressive Art Rock that bands such as Peter Gabriel era Genesis did back in the day. Maybe, I’m looking far too much into things but that was the feelings I encountered on the later stages of the record.

Other standout songs on the album include: Hats The Mandrill, Smiling Thrush, Cecil Succulent and Flatt Controller with Boss Keloid bringing a warped slice of Psychedelic Rock Madness to the party but still offering one of the most upbeat Sludge/Stoner Metal albums I’ve heard in years.

The production on this album is exquisite, Only way I can describe it. The record is brilliantly powerful and equally as positive as well.

Family The Smiling Thrush is without doubt Boss Keloid’s best album to date and is bound to move the band further into the mainstream. This is my favourite album of the year and perhaps favourite album I’ve heard since YOB’s 2014 landmark album Clearing The Path To Ascend.

If you don’t add this record to your record collection when it’s released then you’re seriously missing out. This is a modern day classic record. No question.

Thanks to Lisa at Hold Tight PR for the promo, Family The Smiling Thrush will be available to buy on CD/DD/Vinyl via RIpple Music from June 04th 2021.