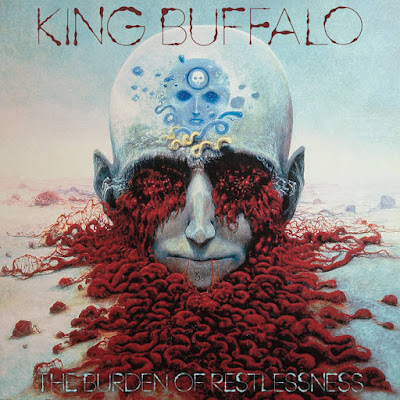 The Burden Of Restlessness - Tracklisting

The Burden Of Restlessness is the new album Psych Stoner Rockers King Buffalo who released two quality releases in 2020 with their last EP and LIve at Freak Valley Live Album. King Buffalo have brought a wave of Progressive Rock/Metal into this album and perhaps an early “TOOL” vibe with the music and lyrical content whilst remaining true to their own original sound.

This is meant to be the 1st of 3 records that King Buffalo will be releasing in 2021 and I’m hoping the future records match the sheer creative intensity the band have woven into this Psychedelic journey with King Buffalo perhaps re-inventing their overall sound yet again with 7 superbly written compositions heldon the album.

King Buffalo do bring their usual and classic Psychedelic Stoner Rock energy to the party but with more focus on the Progressive nature of the album shining through.

Opening song - Burning - does remind me of early TOOL with the spaced out parts soon giving way to a more closed off style of Doom/Stoner Rock we’ve heard form the guys. The music is constantly changing but still feels “classic sounding” King Buffalo and even has the same vibes as their last EP -Dead Star. The vocals and lyrics are always one of King Buffalo’s constant main strengths and it doesn’t disappoint here with a lot of hidden feelings and meanings behind the lyrics. This sets up the picture or template for the rest of the album to follow.

Second song - Hebetation - is a more straight-forward number from King Buffalo but one that sees to their creative strengths whilst offering a more experimental style you won’t expect. Heavy Spaced Out Sounds which has quite a gloomy feeling with the gorgeous synths being a true highlight. The song has already been widely praised since it’s singular release and it’s not hard to see why. The song remains one of the standout offerings on the record and will no doubt get long-time fans pumped up to hear the rest of the album.

Third song - Locusts - is another gloomy offering with King Buffalo playing slow-paced Post-Doom and almost ambient based grooves which builds up to an exciting atmosphere. If you could ever call music “world-building” this is the song to assign that term to. As there is a lot going on in the song than you initially realize. Post-Doom/Stoner Rock chilled out atmospherics are used for the first part of the song before King Buffalo return to their classic style of Psych Stoner Rock overload which leads the album to an almost different narrative it started with.

King Buffalo continue their Progressive Rock journey with the other 4 songs held on the album with the final 3 punch combo of Grifter, The Knocks and Loam perhaps being the most exciting part of the album. This is where the band really start to break new ground for themselves on the record with brilliant sonic sounds combining with the Doom/Stoner Metal template the band have adapted for this release.

The Burden Of Restlessness is King Buffalo’s most daring, bold and unique record to date. The album allows King Buffalo to be one of the most original creative forces within the Psychedelic Stoner Rock/Metal scene.